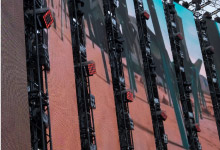 With 10 performance spaces, including 2 main stages, 4 tent arenas, the highly acclaimed Steel Yard, and the new-for-2017 Warehouse venue, Creamfields has once again cemented its place amongst Europe’s biggest music festivals. With audiences travelling from across the globe, and world-famous dance music superstars, the festival continues to go from strength to strength.

On the main Arc (CF01) and Horizon (CF02) stages, PRG supplied festival technology including lighting, rigging and video across both structures. Head of rigging, Q Willis took care of the rigging on both stages, leading a team of expert riggers who created the backbone for the lighting, video, and audio technology.

The Arc stage featured, as its name suggests, curved wings which created an immersive space for the audience. The wings were made up of vertical columns of 12mm ROE Visual LED, built into PRG’s custom touring frames. The spaces in the frames between the columns were used to rig a variety of lighting fixtures including Ayrton Magic Panels, 4 and 8 Lite Molefays, and Atomic Strobes. Icon Beams lined the front of the stage below the wings, creating beams of light which stretched into the sky as the sun set. 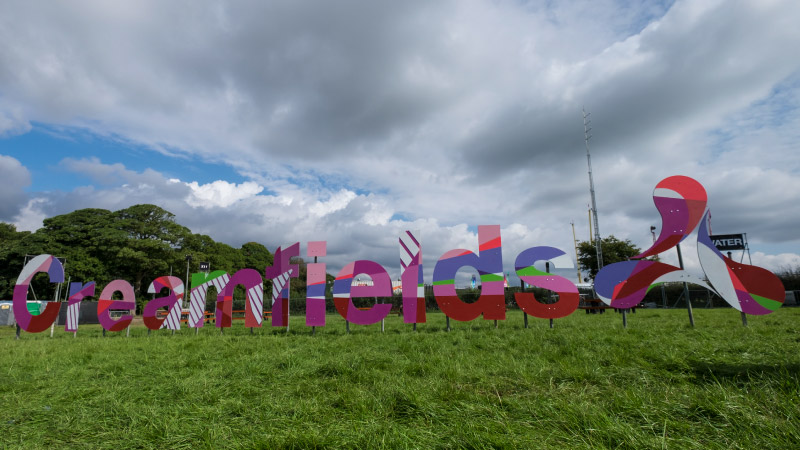 On stage a large upstage back wall was formed from ROE 7mm LED, with a DJ riser built from the same material. The flown lighting was designed to offer incoming artists with a versatile package of fixtures, and this included Icon Beams, PRG Best Boy spots, Solaris Flare Jnrs to either side of the stage, GLP X Bar 20s, and B-Eye K10s. Additional GLP X Bar 20 fixtures were brought in for Tiesto’s headline spot on Sunday evening. Lighting crew chief was Aiden McCabe, with Chris Scott operating using GrandMA2 consoles. Video crew chiefs on CF01 were Ollie James and Colin Mudd.

Above the stage, the LED header was made up of ROE MC-18 Hybrid LED, enabling content designers to use it for content matched to the rest of the screens, as well as prominently displaying the Creamfields branding for everyone to see across the site. 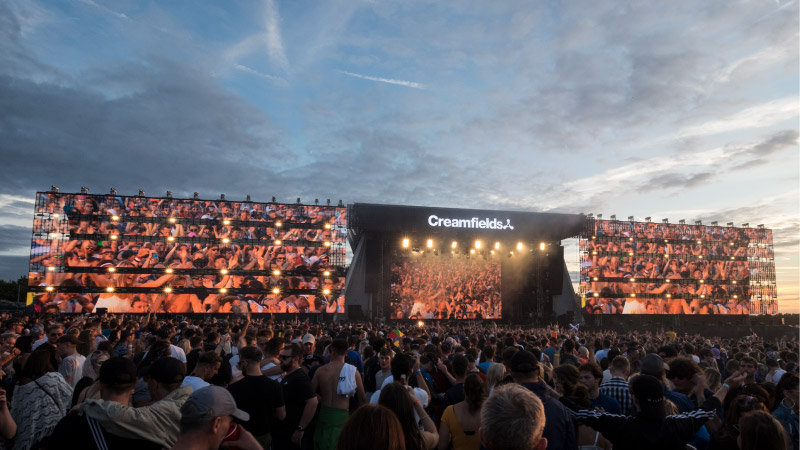 On Horizon, the 18mm ROE Visual LED panels were built into the structure with specific horizontal rows missing on the wings. The spaces in the frame structures were then used to rig a variety of lights including 2 Lite Molefays and SGM Q7 blinders. Below the wings dozens of the new high brightness Icon Edge moving lights were used as beam lights.

On stage, a back video wall and a front DJ riser were both formed from ROE Visual MC-7 LED, with a header of 18mm LED above the stage. Both the lighting floor package and flown rig included Atomic Strobes and Martin Mac Viper Profiles, with the stage flown lighting rig adding 4 and 8-Lite Molefays and PRG’s new Icon Edge moving lights. Cy Dodimead was lighting crew chief for CF02, with Adam Power operating, using GrandMA2 desks.

On Sunday evening, headliner Martin Garrix changed up the DJ riser for a giant LED + symbol which makes up part of his logo. Behind this, flown ladders held additional LED lighting fixtures, creating a multi-layered performance space on stage. Video crew chiefs for CF02 were Craig Saunders and Steven ‘Waffle’ Lemahieu. 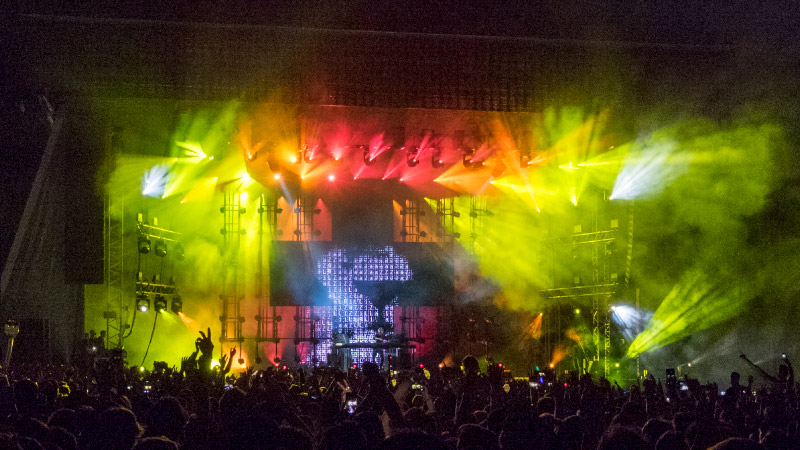 Across the other arenas and venues on site, PRG supplied a variety of technology, creating a different look in each space.

In the Armada/Mega Arena space (CF03), a sectional, wide video screen formed from 15mm LED spanned the rear of the stage, and saw headline performances from Above & Beyond, Alesso, and Armin Van Buuren. 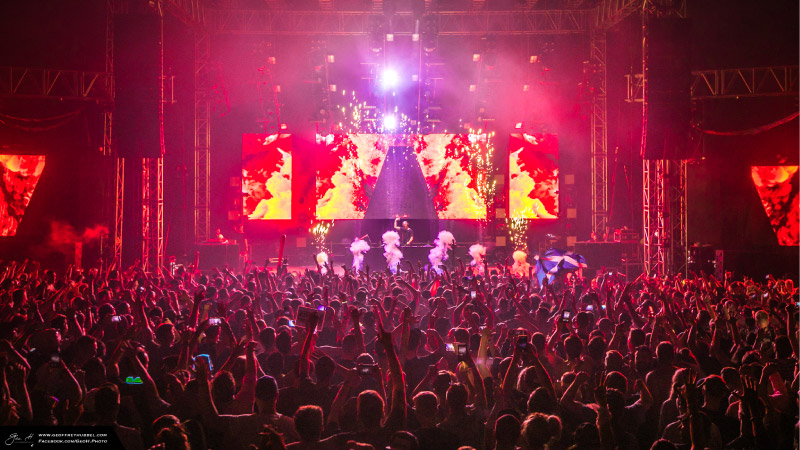 In Steel Yard (CF04) a large upstage ROE Visual MC-7 LED screen and matching DJ riser were augmented by PRG’s lighting flown above the stage. The lighting fixtures were arranged on a Kinesys system, as well as lining the sides and centre spine of the huge metal roof trusses. This created an immersive space, lighting the audience with colourful beams from over 100 fixtures including GS Beams, PRG Bad Boys, and SGM P-5. Creating a great team, Steve Major was lighting crew chief on CF04, with Tess Minor operating using a GrandMA2 desk.

Steel Yard saw exclusive performances on Friday and Saturday from deadmau5 & Eric Prydz, and Richie Hawtin. Steelyard has already been used for two standalone Creamfields events in Liverpool and London, and is returning to Liverpool’s waterfront for a further three shows this November. 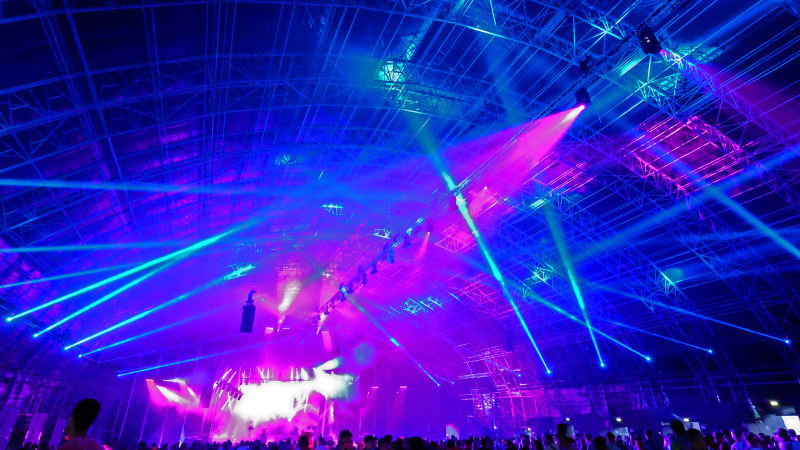 Gordon Torrington commented: “We were very happy to supply lighting to LarMac LIVE for three stages at this year’s Creamfields. It’s a brilliantly organised festival, with a huge crew. Everyone works very hard, with a strong sense of collaboration, and the end result looked amazing!”

In the Pepsi Max arena – a circular tent arena, a 4.8m wide LED upstage wall and DJ riser at the rear of the tent were flanked by 54 square screens; 27 on either side arranged in rows three squares high. The wings wrapped around the audience creating a high-energy space which was extremely busy all throughout the festival. 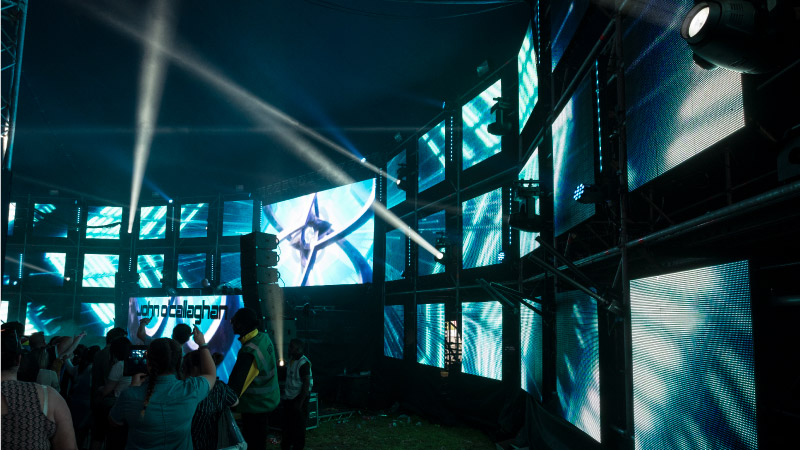 The CF06 stage, featured a single wide ROE Visual 7mm LED screen, spanning right across the rear of the tent arena. The screen was gently curved, mimicking the curve of the tent. On Saturday night, it played host to a very special one-off performance from Stormzy which saw such high demand that audiences were waiting outside the arena to get inside.

In CF07, which hosted Mad Decent, and MK Area10 over the weekend a large upstage flown 12mm LED screen was paired with an LED DJ booth. The arena saw headline performances from MK and Diplo over the weekend, and boasted a DJ set from superstar Idris Elba, and special guest slot from Gorgon City.

New for 2017, the Warehouse was a new structure designed to hark back to Cream’s roots in warehouse parties, and celebrate its 20th anniversary. Giving the new arena an edgy look, PRG XL supplied an upstage screen formed from semi-transparent ROE Vanish LED. With lighting arranged behind the screen, it gave performers a three-dimensional backdrop and a fresh creative look for the new space. 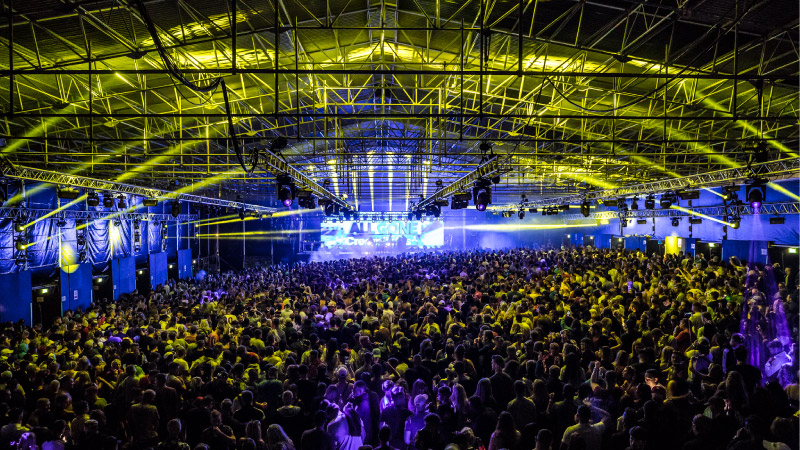 Outside Warehouse and Steel Yard small LED screens were placed which ran looped content with the venue branding. These stepped away from the traditional tent branding and were highly visible around the site.

Across all the stages PRG supplied Resolume media servers to serve content. Project Manager Ian Jones, and Video Content Expert, Erica Frost worked on supplying pixel maps of the various stages to all the incoming artists and DJs ahead of the festival weekend, so they could format their video to the varied screen layouts. For those who needed extra assistance, PRG XL had content technicians on hand to re-size and reformat performers content on-site.

With Creamfields being captured for broadcast on BBC iPlayer and live stream from 4 stages for Facebook Live, media company Corrino were brought in to manage the broadcast element of the festival. PRG were asked to supply equipment for Corrino, including four portable production units, sixteen front of house cameras, and four on-stage robo-cams for some performers. Video engineer, Alex Mulrenan was onsite to maintain the PPU system, and support Corrino’s requirements.

“We’re delighted to continue our working relationship with LarMac LIVE and Creamfields,” commented Macca. “Every year, the technical specification grows and is more impressive, and the audience love it. Massive thanks to every single member of our hardworking crew who worked long hours to make the festival look amazing. We can’t wait to see the designs for next year’s 21st Birthday event!”