It’s that time of year again, Night of the Proms gathers young and old for a night of classical music, shaken up by modern pop artists. The concept of the classical orchestra Il Novecento, playing together with pop artists has been popular for many years, and it still does its magic. However, successful concepts also need some innovation to remain interesting. Under the supervision of Head of Production Alain Van Isacker and Light Design Company Arf & Yes, PRG was asked to develop a custom-made solution in terms of lighting, sound and video.

The biggest eye-catcher in the show are the moving V-shaped trusses above the stage. The custom-made trolley beam system we developed last year for the Night of the Proms, is used here as well, though in a slightly different way. We added a Kynesis hoist in the middle of the rail system in order to move the truss in a V-shaped way. Overall, 6 of these custom-made V-shapes are hanging above the stage. Each V-shape contains 10 Robe Pointes, combined with 56 MiTRIX panels.

On both sides of every V-shape, we added two custom-made triangular hanging brackets, each containing 6 Clay Paky Sharpy Wash 330 fixtures. We also developed custom-made O-frames to be suspended on each side of the stage. The O-frames are made of 86 MiTRIX panels, combined with 10 Ledwashes that shine through the semi transparent MiTRIX LED panels. 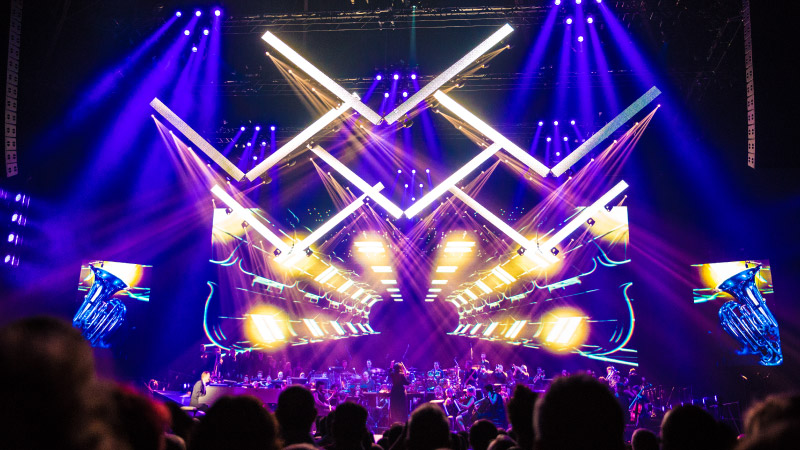 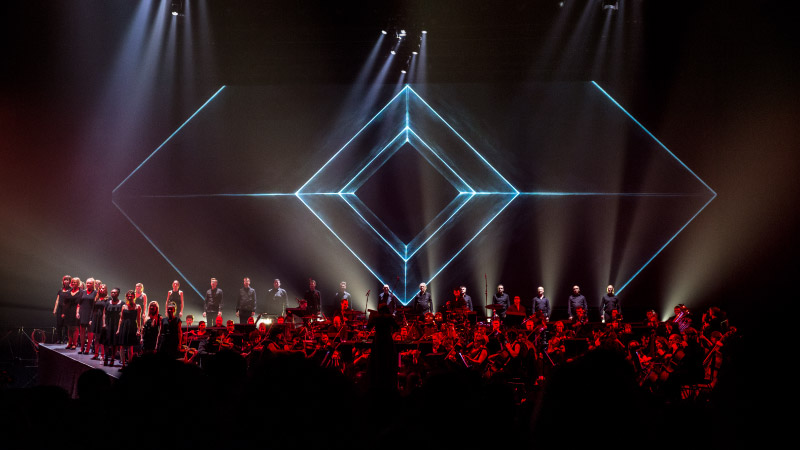 As a backspot, we use our very own PRG GroundControl™ Followspot System. The floorlighting is composed by 66 GLP Impression X4S units that are supported by another 10 Robe Pointes underneath the main screen behind the stage. An Arkaos Media server is used for processing the video images.

As for sound design, Patrick Demoustier was in charge of the configuration. For the first time, the whole PA set was built upon the Energia line from Adamson. The Main PA consists of E15 speakers, with E219 subs, E12 outfits and S10 frontfills. All this is managed by digital PLM amplifiers. All amplifiers are managed by a dual redundant Dante Network.

In collaboration with PRG, PSE invested in a digital wireless system for the choir, so they can move freely on the stage. For the whole show, we use 40 digital monitors and 25 in-ear monitors, together with a wireless intercom system. Our wireless specialists put in a lot of effort to keep all these signals standing!

Like last year, PRG provides a complete DiGiCo console kit. A SD7 as main desk and a SD10 (for the pre-mix of the bugler, woodwinds and percussion) are used as FOH consoles. On stage, a SD5 desk monitors the orchestra and the choir. De monitor signals of the artists and the band are processed by a SD7 mixer. The strings are mixed in the backstage on a DiGiCo SD8, the choir on a DiGiCo SD8-24. All DiGiCo equipment operates in an Optocore redundant network. 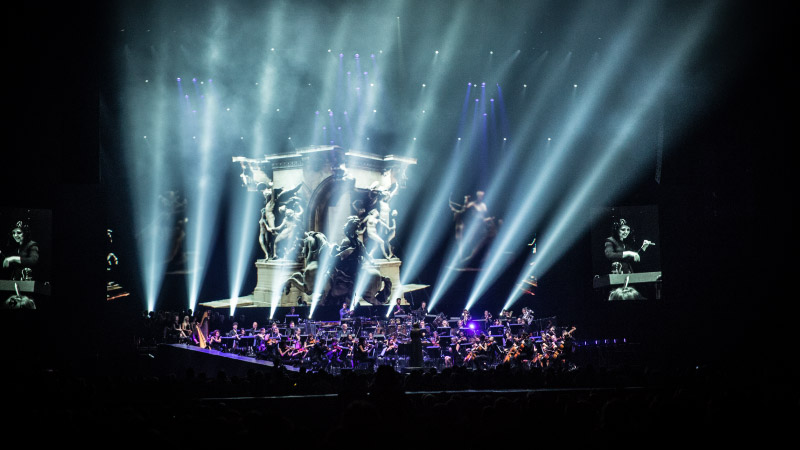 “Because the orchestra needs to change during the show and we don’t always have time to soundcheck, we make presets per instrument and musician so our technicians can apply specific presets according to the orchestra’s composition. A show like Night of the Proms is quite different from any other concert in terms of mixing, because we have to deal with so many in- and outputs. Each input is first processed in a submix, per group of instrument. Then, the submix is sent to the mixing tables. The Opto network processes around 500 channels at this time. This gives you an idea of the complexity we are handling.’, explains Patrick Demoustier.

Night of the Proms started her tour in the Antwerps Sportpaleis on Saturday, November 5th. Last week, two shows followed in Antwerp on Thursday and Friday, followed by a last show in Belgium on Saturday in the Ethias Arena Hasselt. All credits go to the amazing crew under the supervision of Sound Designer Patrick Demoustier and Production Managers Jo Vaes (lighting) and Stef De Raet (rigging). In less than 12 hours, the whole set-up is moved from Antwerp to Hasselt. After 4 shows in Belgium, Night of the Proms travels to the Netherlands, Luxemburg and Germany.