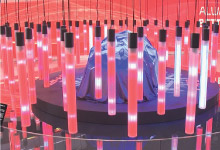 The month of March began with one of the biggest motorshows in Europe. Journalists and photographers gathered in Geneva to discover the latest designs and technologies.

PRG Belgium supported the stands of Toyota, Lexus and Citroën. Eye-catcher in this edition were the 72 1.5m long LED tubes on the Toyota booth. Each tube contained 6 LED ribbons with a pixel pitch of 20mm. The tubes, suspended from 3 circular trusses, were driven by 12 zero-speed hoists. The entire set of tubes moved around and above the new Toyota C-HR. This project was especially designed and developed for Toyota Motor Europe.

Alexandre Huijnen, PRG Account Manager for Toyota worked together with the agency Laing Gale & Associates. Chris James from Laing Gale & Associates tells us about this successful partnership: “The target audience for the car are young, urban, socially active and digitally connected people. Core to the concept in terms of the car itself, was the feeling of ‘flow’, being able to seamlessly travel through busy urban environments and traffic, as well as following high-tech trends.” The choice of LED tubes was logical: “ LED tubes allowed us an enormous flexibility in terms of creatively interpreting the communications around the car in a live environment in a very visible way. The climax of it all was of course the reveal moment. Not only were we able to create animations and color harmonisation with the LED tubes themselves, but the entire rig was suspended by a motion control system which allowed us to further emphasize the feeling of kinetic movement and flow, by physically lifting, lowering and tilting the tubes in synchronisation with product movies shown on large LED screen surfaces.” Behind the Toyota C-HR car, a huge LED screen was constructed using 2 different sources, an Unilumin 3.9mm and a ROE MC7 7mm. The tiles at the top were custom-made to create an oblique edge.

The collaboration between PRG and Laing Gale & Associates has had more than one success story. Chris explains: “PRG’s technical partnership provides us with a seamless service, using cutting edge technologies and expertise in our segment, the motorshows.” 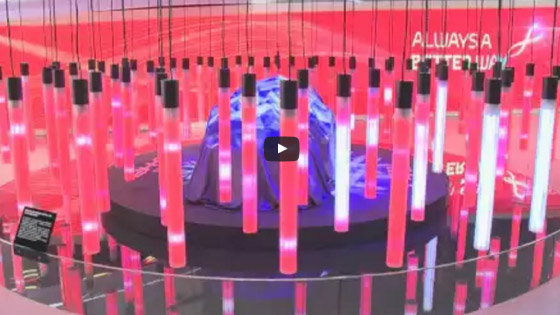