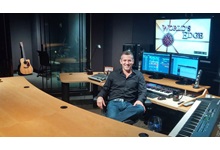 PRG POST, a subsidiary of Production Resource Group, L.L.C. (PRG) the world’s leading provider of production solutions for events and entertainment, announced today that they will now offer original music creation on site as Bruce Aronson, renowned composer for film and television, has joined their New York studio. Aronson is available to write and record original music during the post-production and production processes. PRG POST is a video post-production facility and production center based in Midtown Manhattan.

“It’s a major advantage to PRG POST’s clients that I am now located at a facility where last minute changes to music tracks can easily be made,” says Aronson. “It’s also tremendous gaining access to PRG POST’s leading-edge surround sound audio mixing suite. Clients already come to PRG for their post-production and production needs, making use of PRG’s state-of-the-art video editing rooms, color-grading rooms, and the 5.1 surround sound audio mixing suite. Now for the first time, they can enjoy the benefits of original music scoring at the same time and in the same place.”

According to one client, John Sands, Music Director at IMG and owner of Zero Point Productions, “Bruce is one of the most gifted composers and musicians. I have been producing main title themes and custom scoring with Bruce for 12 years, and he is a huge talent. PRG POST is lucky to have him on site and I am looking forward to the amazing work that will come from having both original music and leading post-production services in one place.”

Aronson brings passion and a lifetime of making music to every project. From earning his degree in classical composition to performing as a band leader and singer/songwriter on the Manhattan club circuit, Aronson brings his eclectic background to his work as a composer. An accomplished guitar, bass, keyboard player and vocalist, as well as a mad scientist-programmer, audio engineer, and producer, Aronson loves every aspect of creating music. His work can be heard all over network and cable TV, as well as in films and video games.

“Now we can offer original music services to our clients,” states Bob Barzyk, PRG POST’s Vice President of Post Production. “Productions that already come to us for our edit rooms, color, and mix services can now get the help they need with music composition all under one roof.” PRG POST’s Senior Video Content Producer, Chris Albert, adds, “We’re also ramping up our corporate, advertising, and marketing production business within the PRG family. Now the videos we produce can have original music that is specifically written for our clients and their projects.”