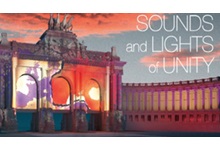 Yesterday, Brussels was celebrating the 25th anniversary of the German reunification in a spectacular way and PRG was proud to support this project with light, sound and video!
The Triumphal Arch of the Cinquantenaire experienced a unique sound, light and video show. Every hour, an 8-minute video mapping was projected onto the arch, creating a unique vision of the European story: from divided Europe, to the peaceful revolution in Eastern Europe, German reunification and the process of European integration. PRG used 3 Barco HDQ 40, the world's brightest projector, to project on the arch and the 3 screens (18m x 8,5m) we’ve installed between the columns, from a distance of 150m. The projectors were controlled by d3 to recreate the 3D images and perfectly fit to the shapes of the building.

In between the video mapping projections, a unique light show created constantly changing patterns on the beautiful Triumphal Arch and its two wings. The constantly changing light scenes were accompanied by ambient music. The two wings were illuminated with 36 SGM P5 and 36 Sharpy while the pediment (horses) was lighten up by 3 PRG Bad Boys and the arcades by 5 PRG Best Boys. The sound was provided by 24 Adamson Y18 fitted on top of 10m towers, 16 Adamson Y10 used as delay and 24 LS EML S318 used for bass.

The show was designed by Matthias Zeckert, a lighting artist from Berlin and internationally renowned video artists from Amsterdam‑based Vision Impossible. In total, more than 36.000 persons assisted to this fascinating projection mapping.

More pictures in our Slideshow