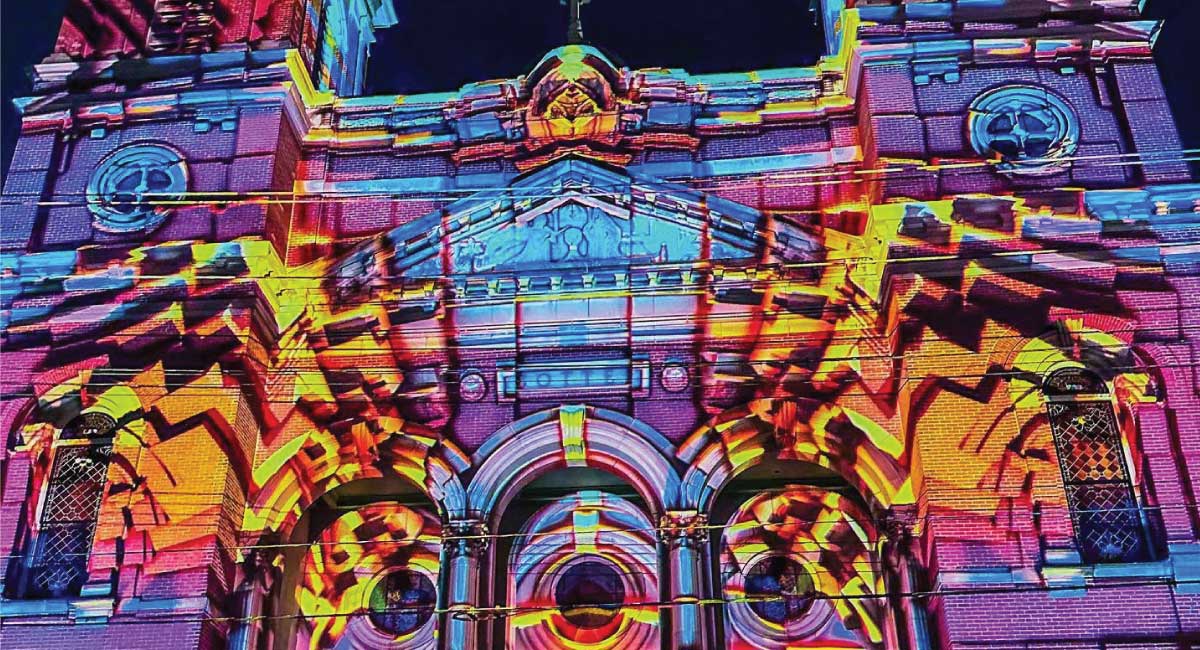 BLINK, Illuminated by ArtsWave, is the nation’s largest light, art, and projection mapping experience. On October 13 – 16, BLINK was back with their first event since 2019, using much of Cincinnati, OH and Covington, KY as a canvas. Run by the Cincinnati Chamber of Commerce (Chamber), BLINK was a four-day, 30 city block, outdoor art experience that unites projection mapping and light-based installations with street art. During the event, video and lighting installations turned the city’s landmark buildings into ‘a techno cityscape of the future’, bringing existing artworks and architecture to life via lighting and projection mapping.

The Chamber estimates over 2,000,000 people attended the multiday experiential event that united many artists—from local to international—with local and international visitors alike. Back for the its third time, production solutions supplier PRG has served as BLINK’s Technical Partner since 2017. PRG provided this year’s enormous event with video, lighting, and audio support as well as a massive crew of designers, technicians, and labor to realize the organizers and artists vision.

BLINK’s Executive Director was Justin Brookhart of the Cincinnati Chamber of Commerce, the Executive Creative Director was Andrew Salzbrun of The Agar Company, and the Content Director was Ben Nicholson, a freelance content producer and Assistant Teaching Professor for Emerging Technologies in Business and Design (ETBD) department at Miami University in Oxford, OH. Nicholson was brought in by the Chamber to work with PRG as a liaison between PRG and the artists. In his role, he helped to get all of the content guidelines from PRG to the artists, and then check that content as it came in so that it would be more efficient when loading it into the media servers.

Nicholson also worked with Miami University’s College of Creative Arts students from the ETBD department who for the Hanke Building, in the Over the Rhine zone, created a piece as part of their Immersive and Reactive class. This installation used two Hippotizer Montane V4+ servers which fed two Barco UDX projectors to project a mix of video mapped colors that traced its architecture and washed it with splashes of graphical content and color.

As creative director Salzbrun noted, “As BLINK strives toward our shared vision for a FUTURE CITY, it takes an incredible team to run after that vision. From our production partners, who worked tirelessly over the last few months, to our sponsors who believed in a vision and supported it generously, and our community who showed up and created the magic that is BLINK, we say ‘thank you.’”

Alongside BLINK and their creative partners, PRG engineered and specified nearly all the installations that took place during the event. In its role as Technical Partner, PRG supported 32 of the 35 total artist installations throughout the two cities. For each of those installations, PRG provided everything from technology (lighting, video, and control) to logistics support, to event personnel to load-in, operate, and load-out the equipment at each site.

Their goal was to deliver the appropriate technologies to best execute each artist’s vision. As a part of the company’s scope of work, they also provided freelance designers that PRG contracted for the lighting-only installations. Lighting and video playback/operations via the media servers was also contracted through PRG.

With a PRG crew of over 30 for the event, the PRG team included Director of Solutions Engineering, Francesco Roggio; Senior Solutions Engineer, Scott Inukai; VP National Product, Video, Bryan Besterfeldt, and Senior Production Manager, Matt Hohmann. Roggio and Inukai led the team on site, coordinating the logistics and solutions. To manage the massive amount of gear and support technology, the BLINK team had PRG working out of Cincinnati’s Great American Ballpark where the Major League Baseball Reds play ball. That location acted as the hub to disperse the gear and crews out across the many different sites, zones, and locations over the two cities.

“Along with Scott Inukai and Matt Holman, we had to figure out all of the logistics and custom engineering for 32 of the locations at BLINK this year,” explains PRG’s Roggio. “For all of the projection locations we did all of the pixel maps, all of the calculations to figure out where everything needed to go, and how to best cover the building to the artist’s direction, as well as what would look best for the building we were trying to project on. For the lighting locations, we figured out the equipment to use to spread out across the city to give a varied experience from site to site.”

Besterfeldt handled the point-to-point air fiber for wireless control at some of the BLINK installs. They used it to connect two MA Lighting grandMA consoles at one location, and for control of disguise media servers at another. Colton Lamoreaux, a technical project manager for PRG, handled some of the Mbox media server programming.

Read the rest of the article on PLSN.