The greatest talents in American ready-to-wear take New York City by storm twice a year during fashion week. This year’s New York Spring/Summer 23 Fashion Week hosted runway shows for over 100 design houses with Tom Ford capping the week. While the celebrity-studded audience is focused on the models and clothes, behind the scenes a team of production experts undertakes an almost Herculean effort to ensure a flawless experience.

CS Global, an experiential creative agency that counts Tom Ford as one of its longest-standing clients, hired PRG to provide lighting for the designer’s much-anticipated collection. PRG worked with CS Global Executive Lighting Director, Renée Molina, and Senior Lighting Designer, Coby Chasman-Beck, on lighting the show, which was held in a former trading floor on Vesey Street. The space was transformed into an intricate set with reflective mirror finishes throughout - including a reflective runway - which presented a lighting challenge. To add to that, the collection itself was comprised of shiny materials from satin dresses, rhinestone embroidered tops, and metallic blazers to sequined gowns.

After getting insight into the collection from Mr. Ford, Molina and Chasman-Beck set out to create a high-energy, exhilarating environment. The team embraced Mr. Ford’s affinity for Hollywood glamor, reflectivity and flare into the camera lens. “We wanted to create a bright environment to encompass his style, the music and clothes,” said Chasman-Beck.

Molina added, “We had to maintain an appropriate light level on the runway for the clothes for the cameras so that the detail in the clothing could be seen. To some degree there is no way of avoiding reflection but Mr. Ford embraces it, and it really does give that exciting feel. It makes people feel energy in the space.” 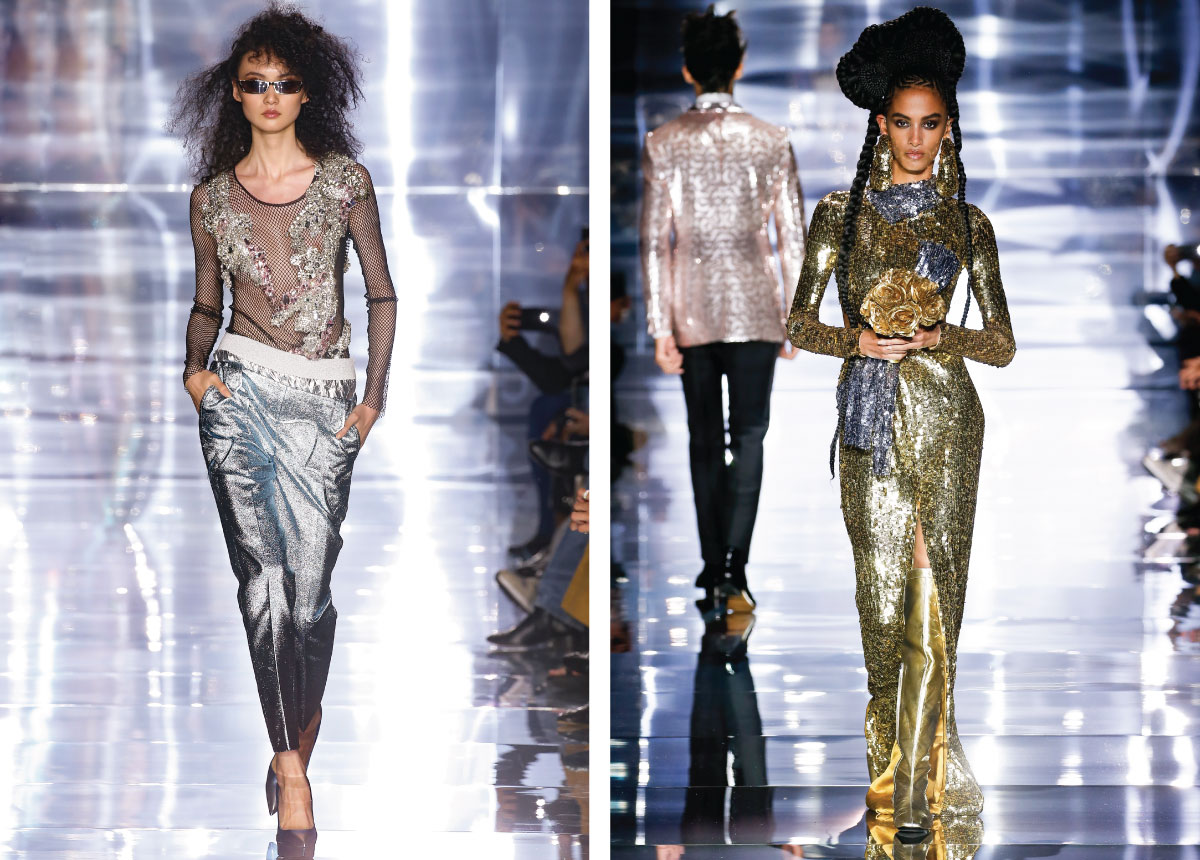 “Mr. Ford is fond of followspots, and we felt that they were essential to achieving a different feel for the eveningwear section of the show. The reason we like the PRG GroundControl® Followspot System is because we can fit the fixtures in a very tight space and control them remotely and that is a real advantage for us,” said Molina.

“One of the big advantages of PRG’s GroundControl® Followspot System is the way the onboard camera work. The backlight followspots are shooting down into a mirrored floor, which reflects front light directly into their camera lens. This creates a huge challenge for the operators. The PRG system provides the operators with multiple camera settings including iris and black and white. Using these functions, the operators can navigate the reflected light and follow the models up and down the runway. Operators also have access to digital read outs of fixture properties including intensity, iris and zoom data which provides more accuracy and continuity,” said Chasman-Beck. “Using the GroundControl Followspot System saved time, labor and headaches and achieved a great aesthetic on the runway and in photos.”

For the eveningwear part of show, the team amped up the Studio 54-era vibe with five 20-inch mirror balls which were hidden in the truss and descended during a two second blackout. DMX winches were used so that the movement could be choreographed with the distance, speed and time controlled by the lighting console.

“We spent a lot of time at PRG rehearsing and perfecting the sequence to make sure they were performing as needed. It might be only five mirror balls and winches, but it was a giant undertaking to get that exact look we wanted,” said Chasman-Beck.

“Although we have used PRG for shows throughout the years, especially for followspots and GroundControl, we were really happy to use them for the whole package,” said Molina. “Since COVID, availability is challenging, and PRG had the inventory that suited the design needs of the show."

PRG also supplied a complete camera package to BLIVE, a production services and live stream provider, for several fashion week runway shows including Tom Ford. Opting for cinema rather than standard broadcast cameras, the show used ARRI AMIRA and ARRI ALEXA Mini. Again, due to space limitations, positioning the cameras was a challenge that was solved by remote control. Cameras were mounted in an overhead Agito tracking system to allow them to move up and down the runway and on Techno-jibs that quickly and silently maneuvered cameras into place to get a shot.

PRG’s 35LIVE! was used to capture the show and produce a more cinematic look and feel for the Tom Ford team to use in digital and retail channels. The full signal from the cine camera is sent to a switcher where multiple versions of the show can be edited in real time. 35LIVE! also provides shading and control controls for live-editing digital cinema cameras, saving the time and cost of doing it in post-production.

Beyond the glamour of clothes, designers, models and celebrities, the hustle of Fashion Week encompasses venue changes, lighting modifications and adjustments to camera positions and lenses. From pre-production planning and prep work to on-the-fly changes, PRG supports a large creative team that has one shot to impress a discerning audience at one of the most important live fashion events of the year, and they do it flawlessly.