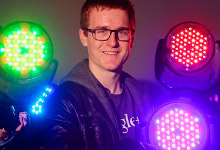 PRG was recently featured in an article from Australian news site, Herald Sun, detailing how 17-year-old Niklas Kreher shines behind the scenes while working under the mentorship of PRG in Australia to support the Victorian State Schools Spectacular, Melbourne's biggest professionally staged song and dance extravaganza. The Spectacular, normally a launching pad for a career in front of the camera, also caters to those with aspirations for a career behind the scenes.

The show is funded by the Victorian education department and has been running for some time. PRG has been the major technology supplier for the past 4 years supporting many technical aspects of the show including over 800 moving lights and over 180 square meters of LED screens with 8 20k projectors.

In association with the producers, PRG offered to mentor kids with a desire to be involved backstage and we developed a program (now in its 3rd year) that involves several full day training sessions at PRG where students are involved with the prep, load in, and the show.

Read the full story at the Herald Sun