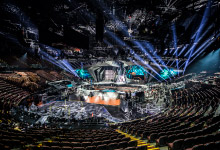 “Somehow…it all collapses into place.”

If you’ve seen an awards show during the past 20 years, a massive sporting event, a televised epic concert, or some of the most popular shows on television today, you’ve probably seen the masterful work of 11-time Emmy Award winning lighting designer and director Bob Barnhart. When the world needs a visual spectacular, it turns to Bob and his team at 22 Degrees to illuminate the visions of the most creative minds in the world.

PRG had an opportunity to talk with Bob about his background, creative vision, and the many projects Bob has entrusted to his PRG team. 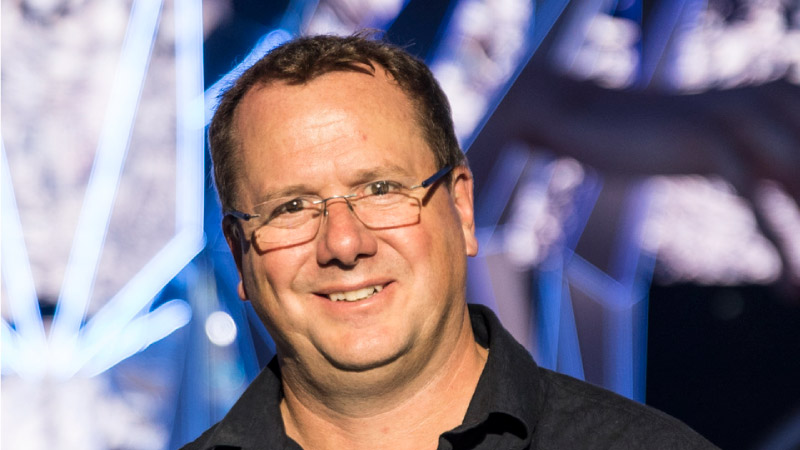 PRG: Bob, your work is bigger than life and it has been seen by billions of people around the world. Where did it all start?

BARNHART: I guess I stumbled through the right doors, by luck, really. I didn’t have any family in the business, no contacts or anything like that. At 16, I started working at a road-house theater on the Chico State campus, unloading trucks, doing grunt work, anything that would get me ‘in’. I eventually started running follow spots on campus for acts like Billy Idol, Joan Jett, and the like in the 80s. It was cool to help run the show while my friends were buying tickets [he laughs]. My big challenge though was that I really wanted to get to the industry, but I didn’t have any contacts to find a way to get ‘known’. An opportunity came up to transfer to California Institute of the Arts, which I jumped on. I knew that I wanted to work in the entertainment industry and I knew that Cal Arts could help, but I guess I was smart enough to know that just because I had a college degree, didn’t mean that I was going to get a job doing what I loved. I needed to be in Los Angeles, and I needed to have a good attitude, a strong work ethic and positive personality. The only way to develop those skills was, and still is, with as many people as I could and learn. That’s how it all started.

PRG: What inspired you to get into this business in the first place?

BARNHART: I guess it was the people of the college-type theater who really inspired me to get into entertainment industry. I learned really quickly that whether you’re the lead actor or the fourth prop person, everyone is treated the same. I felt really accepted at a young age and I was attracted to that.

PRG: You worked with PRG on the Video Music Awards (VMAs) this year and the show was definitely the first-of-its-kind in terms of venue, set design, lighting design and direction. Can you tell us a bit about your inspiration for the show?

BARNHART: Inspiration for lighting quite often stems from set design. It’s a major driving factor in the overall look of the show, so you need to determine where you want or need to place lights to enhance the set and the performances. The VMA set design by Ric Lipson of Stufish, called for the entire Forum to be used, five stages that became one location with a giant 360-degree environment for broadcasting a live performance. We had to take into consideration that there were 12 individual performances in this massive space so we had to figure out a common-thread, visually, that enabled each performer to perform ‘individually’, using their own creative approaches, while still maintaining the vision of the overall set design. We wanted to make sure that it didn’t look like a performer just ‘dropped-in from their tour’. We had to have a theme that made each performer look like they were part of the entire production. Ric and I decided that the LED Tape activation could be that underlying visual theme and I think it became the signature of the 2017 VMAs. 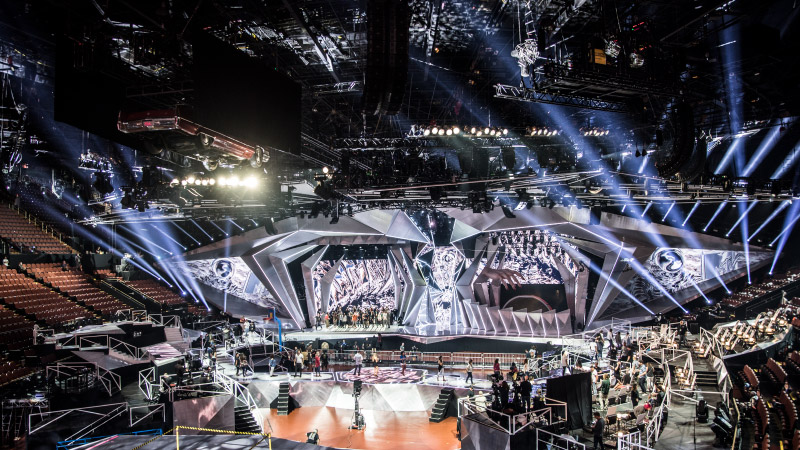 PRG: It’s gotta be tough wrangling all that creative energy from so many different camps. How do you make that happen…bring the vision to life?

BARNHART: It’s funny…I always thought it would make a great television show to record every phone call or video conference for the production of a show like this, and then show how the visions expressed during those calls actually materialized…but I guess that might take some of the magic away. But honestly, the process evolves from all different corners, individual acts. On our side of the creative team, we understood what each group was thinking of doing, it’s a long creative process, concepts to turn into renderings, technical functionality to consider, audience experiences to create. It’s a massive collaborative effort and everyone just seems to ‘get it’ – to make something bigger than just one person’s view.

PRG: How does that creative process transfer into the type of gear and crew that you use?

BARNHART: At 22 Degrees we do high profile shows all over the world that need to be ideal for everyone involved, from an advertiser, to the audience, to a gear manufacturer. That requires a lot of brain-power. That’s why we work with PRG. They understand the gear, the most innovative and available technology, the equipment that could literally be created to accomplish the task at hand, and the crew that would be necessary to make it all happen. Since PRG is a global company they have a lot of clout with manufacturers and can either source the gear we need or work quickly with manufacturers to make it. We work with PRG on a global basis for shows of all sizes, including our most challenging shows, and they just always find a way to make it all happen, on time and on budget. 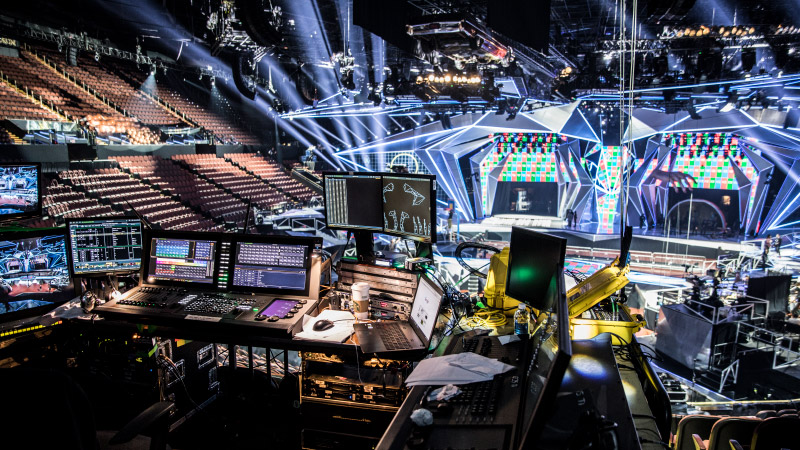 PRG: How about challenges with the VMA show? The challenging venue with a relatively short time frame, there must have been some very interesting hurdles.

BARNHART: The VMA production process is very different than the Super Bowl Half Time, which is just one performer with one focus. The VMAs had 12 performers, 12 different creative objectives, so you’re constantly getting on and off calls, understanding that the objectives of each performer are different, and you are continually working to give them something unique and different, but still maintaining the show continuity. My guy at PRG is Tony Ward, I’ve worked with him on countless shows because he never says ‘no’, he finds a way to make it work.

I guess the biggest stumbling block in the VMAs was that we had to turn the venue into a 360-degree performance space using nearly two-thirds of the arena floor, with a lot of key light positions that had to be addressed, most of it done after the scene was set. Think about this, if you go into a theater, you pretty much know where the talent is standing and looking. But when you come into a VMA type scenario like this the talent could be anywhere looking any place. But having all this great gear and crew from PRG on set, well, somehow, it always collapses into place [Barnhart chuckles]. 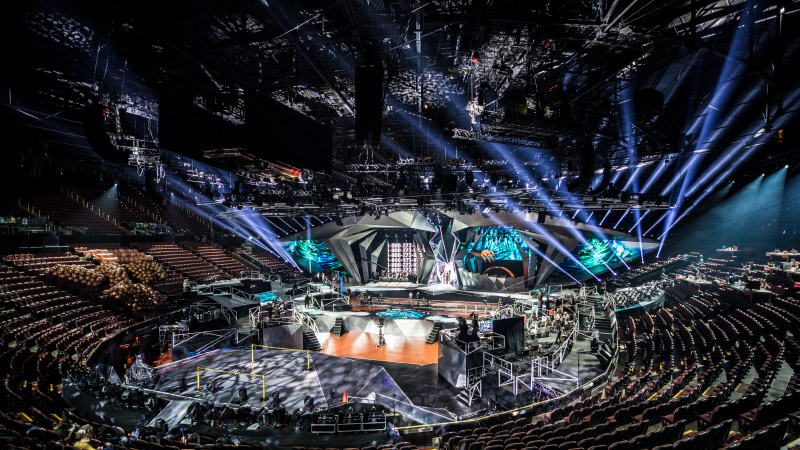 PRG: Was there any particular gear that helped make it all ‘collapse into place’

BARNHART: Absolutely, and it’s something proprietary that I started working on with PRG. It’s the PRG Best Boy GroundControl. It’s a great system that allows this kind of a show to happen, to make it much more viable. Instead of hanging countless truss spots, and the safety and functionality of hoisting guys up there to operate those lights for countless hours, GroundControl allows us to operate the lights on the ground from anywhere in the building. We now use this gear on almost every show, and we will continue to use it again and again, as well as work with Tony and our entire team at PRG. 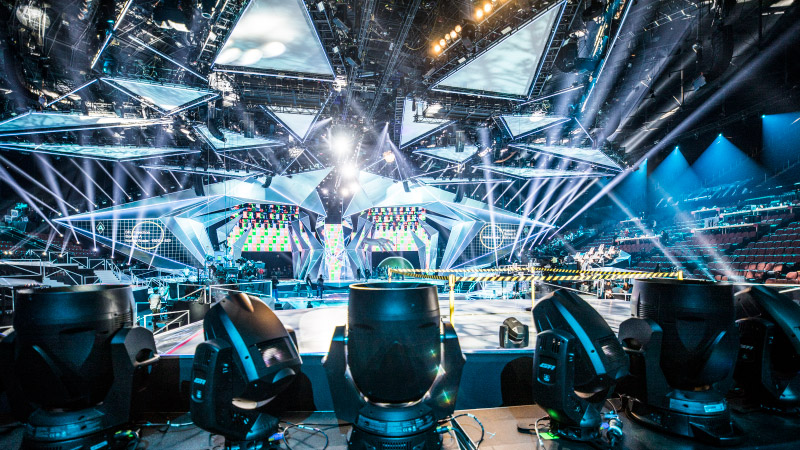