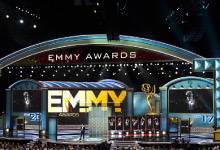 “A really good lighting designer is really an architect, taking an environment and sculpting it into something that is appealing.”

You might say Bob Dickinson is “the” television lighting designer. His illustrious career spans decades - awards shows, music shows, game shows, talk shows, and special events - all of which account for more than 1,500 on-screen television credits.

In 1990 Bob founded Full Flood, Inc., a consortium of lighting designers and directors of photography for the multi-camera television industry. The work produced by Bob and his team on such programs as 25 Academy Awards broadcasts, the opening and closing ceremonies of the Olympics, Super Bowl halftime shows, “The Ellen DeGeneres Show”, twenty-two Emmy Awards, the Kennedy Center Honors, and the Grammy Awards, to name a few, has amassed 20 of the most coveted industry awards including 18 Prime Time Emmy Awards and two, Day Time Emmy Awards.

PRG got together with Bob, and his co-designer [Emmy-winning lighting designer] Travis Hagenbuch, to talk about Bob’s background, creative vision, and the myriad projects Bob has entrusted to his PRG team. 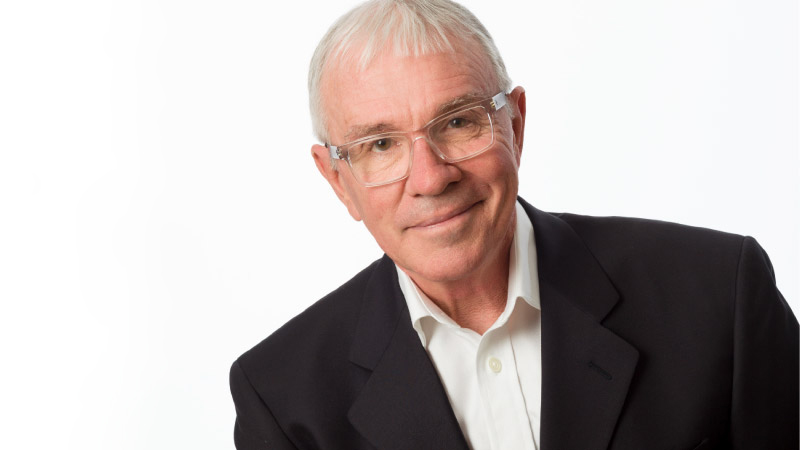 PRG: What inspired you to get into the industry?

BOB: When I was in high school I was drawn to the concept of drama and environment that presented life. I was in the drama club, but I was a completely lousy actor. There was a play we were supposed to do and the guy who volunteered for stage crew didn’t show up. Since I had a minor role in the play, the director asked me to just do the lights. Our school had a huge stage and a lot of lights so I ended up lighting the entire play. I knew instantly that form and balance of lighting played a huge role in the show. Since then, I have developed a strong opinion about form and structure in regard to anything. A really good lighting designer is really an architect, taking an environment and sculpting it into something that is appealing. Lighting, even in a film, is the most important and defining part of those images. It’s the same thing in entertainment television.

PRG: How did you get into the television lighting business?

BOB: After I discovered my interest in production, I was keen on being involved in the motion picture industry. I wormed my way into Universal Studios and worked on episodic televisions shows. I was assigned to work with a lighting designer on video tape instead of film and after that I never wanted to go back to film. In the mid-70’s I worked as a lighting assistant and by 1982 got my first Emmy Nomination; I had gone from a lamp operator on film to a designer just seven years later. My first Emmy Nomination was for the television show “Solid Gold” with the Solid Gold Dancers, which was before the launch of MTV. At that time, if a music artist had a new release, there were very little opportunities to present their music on television. As a young designer, I was fearless. I found out that the rock band Genesis was working with moving lights, so I convinced the producers of “Solid Gold” to purchase these moving lights and I worked them into the show as quickly as possible. I started using 160 moving lights, which enabled me to reduce the overall installation from 2,000 instruments to just under 400. The concept and trickery of moving lights was new for TV, but also new for the financial imperative. It was soon understood by producers that their labor costs could drop dramatically since fewer instruments could do so much more. It was the first time moving lights (?)had been used on TV and the show got a lot of recognition; it was transformative for entertainment TV.

A year later I was asked if I would be interested in doing the Oscars. I was in my late 20’s and the Oscars had never used a lighting consultant, they wanted to ‘up’ the contribution of lighting, and my name came up because of the work I had done with moving lights on “Solid Gold”. The one thing that I did not mention to the producers of the Oscars was that my entire expertise was on video tape, I had never done live TV. I guess we did a pretty good job because I have been asked back over and over again.

PRG: What inspired the stage, lighting, set design, and vision for the Emmys?

BOB: The producers didn’t want the show to look like a traditional Oscar-type broadcast. They wanted it to look like a major event, but not typical. The creative inspiration for the show came from the old Warner Bros. helicopter shot flying over the sound stages. We thought we should try to elude to that since everyone identifies that with filmmaking. At the Emmy’s, our lighting was supposed to encourage and embellish the structural stage. We approached the design and the cueing by using a rig that allowed us to make the scenery without creating a big light show. I think the result was extremely handsome. Travis [Hagenbuch] was, is in every way, a co-designer of the show, this was not just my project. It was a design that we arrived at together. The process really was comprised of a lot of creative discussions while the producers were simultaneously wrapping their heads around where they wanted the show to go. Once the production designer gave us the landscape, we went to work. 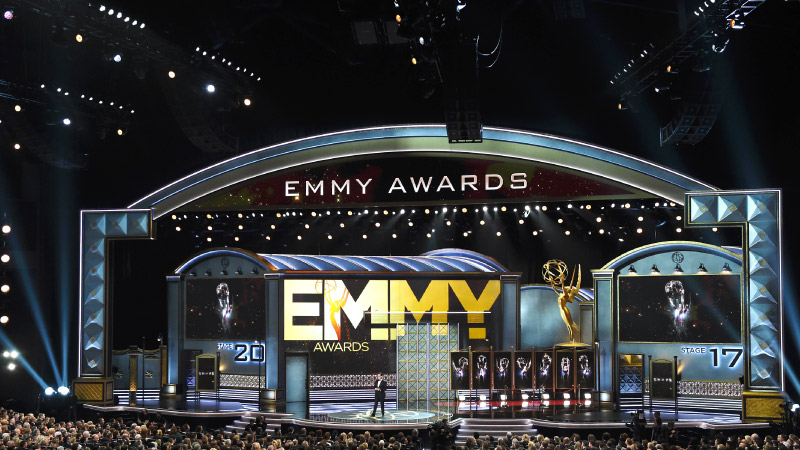 TRAVIS: The process always starts with the scenic renderings. A large part of our installation was driven by the fact that we had to support the environment, rather than create a light show. The biggest negative space we had to fill was the sky above the sound stages, which was huge, so we needed a lot of visual density to support what was happening down below. Inside the faux sound stage on the set was the live band, so we had to make sure the functional lights were out of sight. You never really saw the lights because we tried to trick the eye, where the lights could do their job but not look out of period in any way.

PRG: Can you walk us through some of the behind-the-scenes process of the Emmys?

BOB: In the scene, the idea was to convince the audience they were inside the sound stage; and that’s where the big old-style Fresnel lights existed, as if they were inside a studio. It was a challenge for sure because it was just a big black box and all the artists and their teams really wanted to give their broadcasts some kind of identity to create front-of-house scenery. So, we chose to populate the space with these old-school 10,000-watt Fresnels, to reference old school Hollywood filmmaking. By the way, the Fresnels are nearly impossible to source. I’m not even sure how PRG found those Fresnels since they are not used much anymore, but as usual, PRG made it happen.

TRAVIS: From there, we worked with the production designer, the producers, and the network. The team really worked together very well, which ultimately lead to a flawless PRG load-in. It really was a very smooth pre-production process.

BOB: Not to say there weren’t any last-minute embellishments or discoveries, which is the nature of creating a flexible environment, but the use of intelligent instrumentation allows this to happen. Not to sound like a commercial for PRG or anything, but the instrumentation they provided allowed us to create an environment that could do almost anything, instantly.

PRG: Speaking of PRG, how was the equipment, crew and technology from PRG instrumental to the Emmy’s?

BOB: In this industry today, requests from multiple shows puts a strain on the inventory from any provider. Honestly, PRG is amazing at providing equipment anywhere in the world, so that we, as designers are not limited to what is convenient for PRG. They make our designs, which can sometimes be whimsical, become a reality, without us having to deal with substitutions and revisions. From a designer’s perspective, it’s a huge reinforcement to know that our design will never be inconvenienced from lack of equipment. Even though PRG has become the gold standard of vendors, they still have not lost track of being viable by keeping their instrumentation functioning, and making it available on time, every time. I think PRG’s real secret is their personnel. Tony Ward, who is head of lighting, is not just some guy who knows what instruments can do, he knows exactly what it takes to get instruments working and what we need to get the job done. The techs are fantastic, too, they are the foundation of any design and they always come through. The PRG staff board operators, the folks we call Lighting Directors, are make-or-break for a rig that is comprised of all intelligent instrumentation. The PRG team is not just any operators, they know how to anticipate the needs of a designer, what technologies to use, and how to make things happen, quickly. On the Emmy’s we could not have done it without the input or expertise of the PRG team.

TRAVIS: PRG’S GroundControl system is simply the best in the industry. It solves so many challenges like being able to put follow spots on the side of the room and on railings without having to go into Queen Box or other seating.

BOB: Travis is so right. Ground Control Spots were cool and they made sense to the producers, since they were able to spend a lot less money on installation. This really is the most revolutionary change in lighting design for some time. The placement of follow-spots is literally unlimited. They are homogenous to any design and the fact that manpower is at ground level instead of dozens of feet in the air relieves many thorny issues. I am finding that I am including more follow-spots than ever before. This is a real game changer!