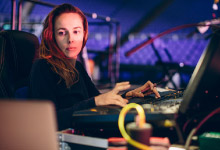 "I can't say that I am someone who is never happy, but I want the perfect cue, the perfect look, all the time. I have actually fallen in love with making beautiful looks."

If you had been touring for eight years with bands and stage performers as a Lighting Programmer, Designer or Director you'd pretty much think you had it all down perfect, right? Not if you consistently challenging yourself, like Celine Royer. From Asia to Africa, Australia to Europe, North America to South America, Celine has combined her left brain and right brain skills - and her affable personality - to a wide range of bands, performers, producers, directors, managers and production companies. PRG has worked with Celine for three years on many projects, most recently on the Linkin Park & Friends Celebrate Life in Honor of Chester Bennington tribute concert at the Hollywood Bowl. And there is much more in store for this 35-year old, French-born, multi-talented creative powerhouse. PRG had an opportunity to talk with Celine about her career and vision for the future of live performance lighting. 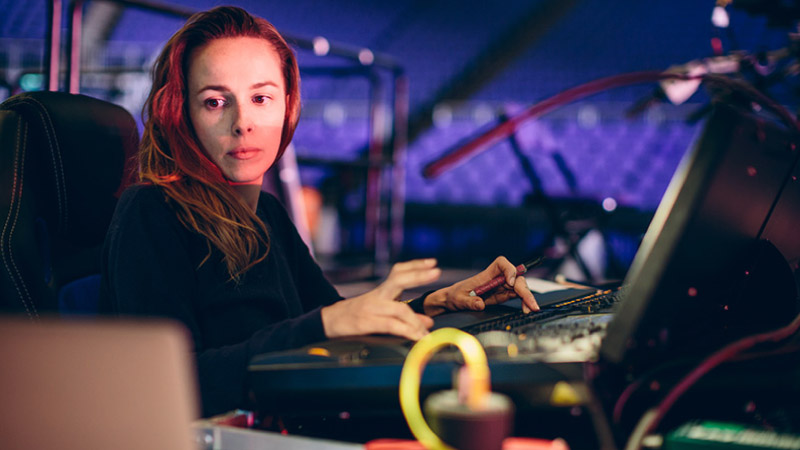 PRG: Your range of production capabilities seems limitless. How would you described what you do?

ROYER: You could say that I am a freelance designer/programmer/director of live music performance shows.

PRG: Was there something that inspired you to get into this business?

ROYER: There are so many ways to answer this question. I really wanted to make my parents proud; my mother tells her friends that I 'do lights' [she laughs]. In reality, I love music and performing and creating a show that audiences and performers will love. I started my career as a lighting technician in France. I was also a singer in a band and wrote and performed songs for commercials. Somewhere along the way I became interested in sound engineering, so I got an internship at a theater in Paris. After a couple of weeks, the manager put me in as the lighting technician for a pretty well-known band. I was so stressed out because I didn't know how to run the console. I taught myself everything about that board quickly and after that first night I fell in love with making beautiful looks. The manager then asked me if I wanted to go on tour with the artist, Keren Ann. I really didn't know any better, so I said yes, went on tour in France, and loved every minute of it!

PRG: What's your favorite thing about being a lighting designer, director and programmer?

ROYER: I've been working in this business for eight years and have had some incredible experiences all over the world. As a director/programmer, I have had the opportunity to work for designers who know exactly what they want and I've had the opportunity to work with clients who just have a vision and ask what I think, or what is possible. I love to work in both scenarios because I get to learn about people, creativity, technology, and about myself. I get to explore my left brain, my right brain, and everything in between.
As a designer, I love the process of creating a show, from the first idea you have, it can be a story, an element, an everyday scene, all the way to the final show. I also really enjoy programming for myself.

PRG: You worked on Linkin Park's "One More Light" tour and endured the tragic loss of lead singer Chester Bennington, who was very complimentary of your work. Can you tell us about that experience?

ROYER: At one time in my career I thought working for myself would be the most comfortable way to work. I was introduced to Linkin Park by Bobby Allen at PRG. Linkin Park's Production Manager, Jim Digby, had asked Bobby if he knew a young Lighting Designer and the rest fell into place. I learned a lot about myself on tour with Linkin Park. I wasn't in my comfort zone for the first month of the tour because I wanted to do something really amazing. I was working with Travis Detweiler who was the Artistic Director. I had ideas coming from the Production Manager that he wanted to share with me, then the band had their thoughts, and the management had their direction. I had to work with all of these amazingly creative minds and lots of ideas, including my own. So I kept refining the visual experience of the tour almost every day, to push my limits, to make the show visually incredible. I really didn't want to go on tour again, but that changed with Linkin Park. I remember the production manager trying to explain that there was this big family feeling with Linkin Park. That they wanted everyone to work on the creative execution together. A lot of people say that, you know, the family thing, but I really felt it with this tour and this team. When you're on the road for several months with a big team you never know what's going to happen. I ended up loving the show, the people, and the team. The band loved my work, I loved working with them, and with the entire crew. And, we all definitely got closer after the tragedy.

PRG: Why did you make the move from France to the U.S. and get together with PRG?

ROYER: I moved to the United States because I wanted to do bigger shows than the ones that were available to me in France. And I always wanted to have an experience in the US. I wanted to challenge myself. I didn't have the same level of connections in the U.S. and I needed to get together with a company that could recognize my abilities and sponsor my work Visa. I contacted PRG because I had done some work for their office in Belgium. Again, that's the PRG family thing that everyone talks about, they really do support you. PRG sponsored my Visa for three years and gave me the opportunity to work on some great projects, and thanks to Bobby Allen, I also worked on Coachella's main stage, Desert Trip, as well as a number of other projects. That's something really great about working in Los Angeles, there's a lot of work and people will give you a chance, and if you suck you'll get fired the next day, so while the opportunities are there, it makes you work harder to do great work. This year I will be working with Jennifer Lopez as the Lighting Director on her residency in Las Vegas, as well as a few one-off's with her. Thanks to PRG sponsoring my first Visa, as a freelancer, I've been able to accomplish more in the U.S. in three years than I did in eight years in France.

PRG: There is a great deal of awareness, discussion, and action of women in entertainment and production. Has this affected your career?

ROYER: There are more and more women working in this business. It's not easy and there's still a lot of work for women to do. I think everyone needs to understand that the production jobs in this business have for decades primarily been occupied by men, but now women have a developing interest and certainly equal capabilities in the vast array of jobs that are available in the industry. But since there hasn't been a lot of women in the business, we have to work harder to prove to clients- both men and women- that women can do everything the men can do and it is good to have men and women working alongside each other in this field. We have a lot to share together and the comradery can help generate a lot of great, strategic and creative work. Frankly, gender shouldn't matter; either you're good or you're not. If not, then you won't work. If you are good (male or female) then you will work. Without sounding conceded, I think I'm living proof of that.

ROYER: Next? I don't really know. We've seen a lot of technological improvement -- really cool, crazy stuff, especially during the past five years, with 3D, lasers, drones, augmented reality, and so much more. PRG has really been a technological driving force. I'm not old by any means, but this next generation of creative women and men is going to be incredible. I see all the new young programmers and designers who do an awesome job and have great ideas, which only means great things for this business. I would like to see some of the conventional lighting come back into vogue, just as a way to challenge everyone again and make us all think harder, work harder and do even better work.

PRG: Do you have any advice for the 20-year old you?

ROYER: First, I would not change anything I have done. I've been a performer, a roadie, an audio tech, a programmer, a designer, and a director and I keep learning every day. I guess that is one thing I would tell myself; to keep learning. I would also tell myself not to take anything personally when it comes to women working in what has historically been a man's business. I do see some artists who prefer to work with women and some who prefer to work with men; but sometimes as a woman, it is hard to be heard. It takes a lot of energy but anything worth having is worth working hard for. If I could change anything about myself in this business I would have gone to school for lighting direction. I love making things look beautiful. I love having ideas from the first discussion to the final production and bringing them to life. 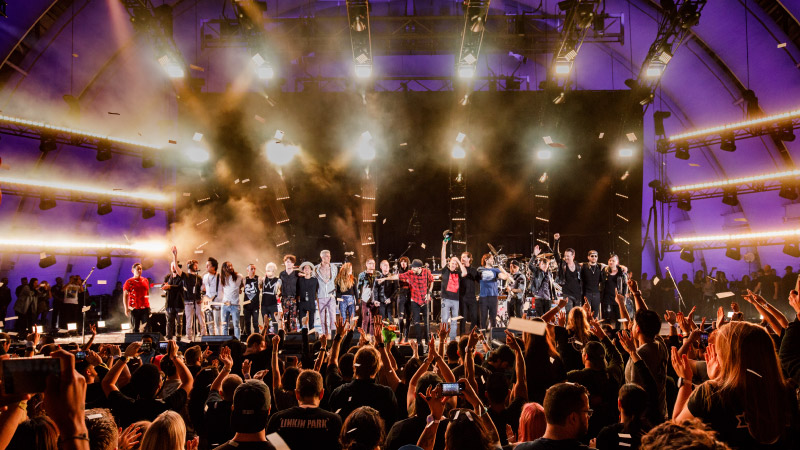 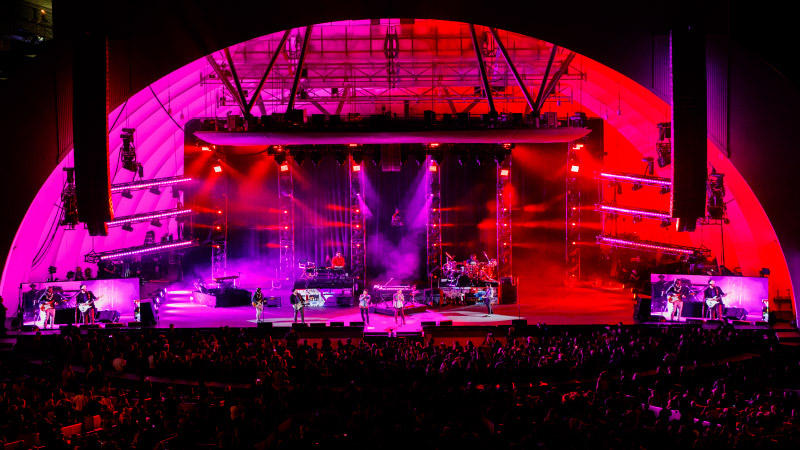 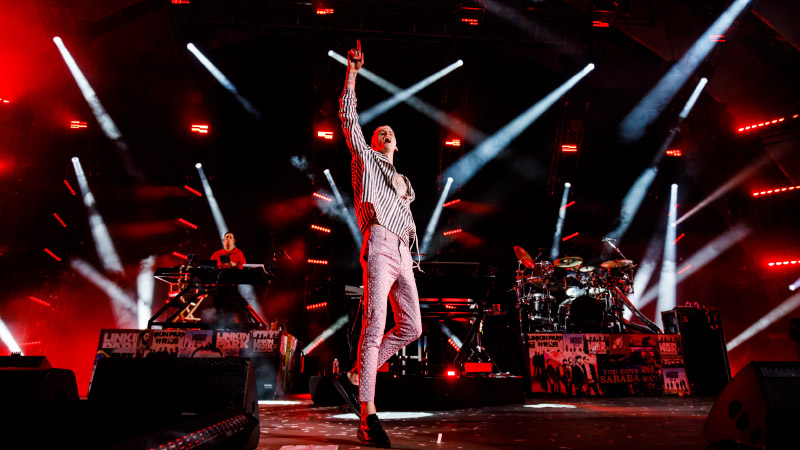 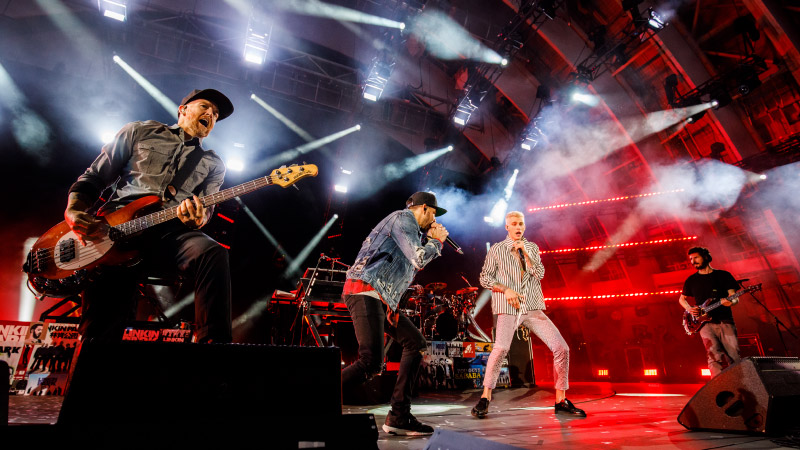