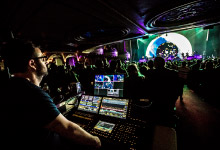 “The Best Boy has been the only light we’ve had on tour with us since 2012. The features of it are great: the prism wheel, extruder wheel, moire gobos, even down to the fan blade spin effects on the shutter, they all help to enhance his music.” – David “Fuji” Convertino

Noel Gallagher has been a polarizing name in pop since 1994, when he debuted onto the scene with Oasis’s Definitely Maybe, an album that marked both the rise of Britpop and the band’s tabloid-ridden, era-defining climb to the top of music charts. He’s been a consistent force in the entertainment industry since then, releasing two more record breaking albums with Oasis, and then in 2011 going on to form his own band, Noel Gallagher’s High Flying Birds.

Gallagher seems to have rekindled the magic of his freshman effort, 23 years later. Critics have hailed the band’s third album, Who Built The Moon? (2017) as the The High Flying Birds’ greatest record. The idealism and absurdist metaphor that first solidified Noel as a great songwriter has grown to encompass a sound that is entirely recognizable, but somehow brighter and more joyous.

We had the pleasure of sitting down with the man who is responsible for translating these sounds into visuals for the tour: David “Fuji” Convertino. Fuji has been doing stage and lighting design for Noel Gallagher for the past 7 years, and PRG has been there to support him every step of the way.

PRG: Tell us a little bit about how you first got into lighting design.

CONVERTINO: I’ve played drums since I was 5 or 6 years old. When I was 13, one of my teachers played for the Central New York Circuit, so I went out as his drum tech. The band had just purchased 30 PAR cans, and asked if I wanted to do their lighting. I gave an enthusiastic yes, even though I had no idea what I was doing. There was a guy who did sound for them and he had toured on a national market, so he taught me how to wire my first PAR can and patch a leprechaun rack that you could just plug into the wall. 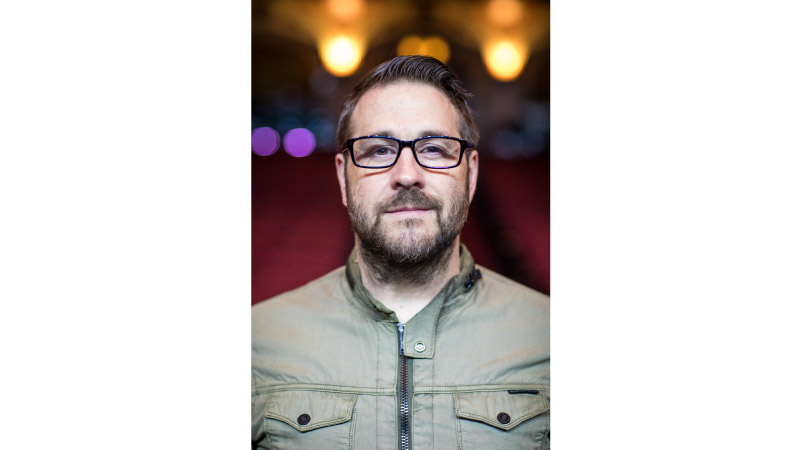 PRG: What inspired the lighting and stage design for the Who Built the Moon tour?

CONVERTINO: The stage and lighting design for this tour all came from a film Noel showed me while we were the support act for U2’s Joshua Tree Tour. It’s an Alejandro Jordowsky film that John Lennon and Yoko Ono financed, called The Holy Mountain, which is also the name of a single from the album. I’d never seen it – but it was a really trippy movie. There was one image from it that looked like Radio City and the Hollywood Bowl merged together. Noel asked if we could do something like that as a stage design and that became the inspiration for the semi-circle screen masks. I didn’t want anything to impede the semi-circle – even though right now we have straight trusses, if you block those it ruins the imagery. Instead of downstage truss, we have an open look and just side-light the band so everything is shadowed. I think it’s pretty cool that this was all based off just watching that movie! 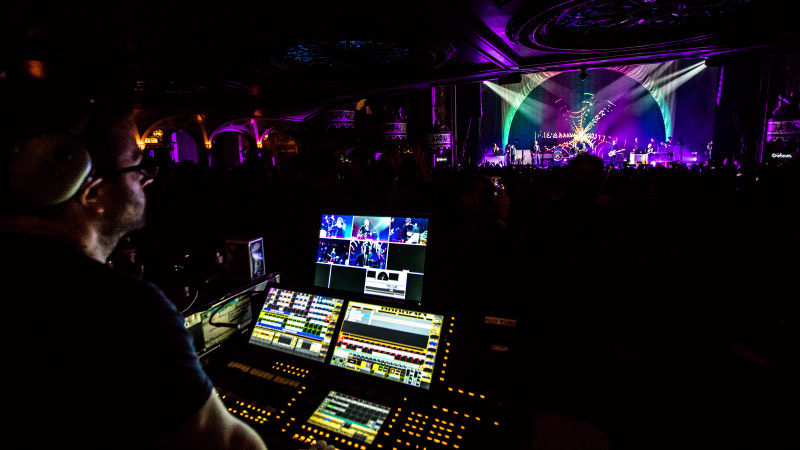 PRG: What was the overarching goal to achieve with this event?

CONVERTINO: Visually, in the past Noel’s tours have just gone with a floor package with supplemental local supplied downstage truss and upstage truss. On this one, I wanted to try something different. Now that he’s got so many band members on stage, we kind of run out of room for a large floor package. Trying to put side-trusses in theaters just seems natural. It was more about getting shadows and angles that look great for the cameras. I wanted to hit his face with a left side light while he’s being shot from the right. We played up the dimension of being side-lit. 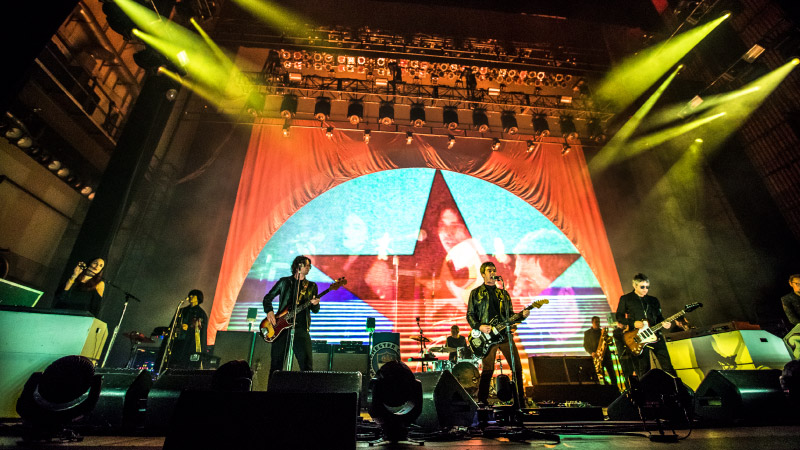 PRG: How does the creative process transfer into type of gear and people you use?

CONVERTINO: I will have to start from the beginning of our partnership to answer this! Chris Conti, myself and Michael O’Connor, our production manager, took a train to Secaucus to see the Best Boys in 2011. Robin Wain from PRG has been our salesman since the old Oasis days for global tours.

Robin arranged for us to see the new light coming from PRG, and I absolutely fell in love with it. The Best Boy has been the only light we’ve had on tour with us since 2012. The features of it are great: the prism wheel, extruder wheel, moire gobos, even down to the fan blade spin effects on the shutter, they all help to enhance his music. Per song, there’s an effect in that light I can use that will look perfect. You don’t have to go to some mystical land to find an effect because it’s all in the Best Boy. It just makes lighting his music easy. Plus, the color effects are unbeatable, the zoom, brightness and crispness of it – it edges beautifully. It’s the only light we want.

PRG: Were there any challenges to this event? If so, how were they solved?

CONVERTINO: Like every tour, budget, budget, budget! The amount of lights on it gave us more looks. The upstage truss comes from a high-angle so you don’t see it bleeding into the mask of the screen. Not to mention, if you put too much gear in one spot, it becomes mud, so your options are to do really tight beams, which to me, gets boring after two or three songs, or layer light on top of light. For me, lights are like oxygen: they need room and space to breathe. If they are on top of each other, they suffocate.

I did this by making focus angles that I knew I could achieve in every venue, and by trying to do things that weren’t out of the realm of the lights or the size that we would have. For example, if we went into a venue where they have a low ceiling, I had to be sure in pre-vis that things would work in every constraint. 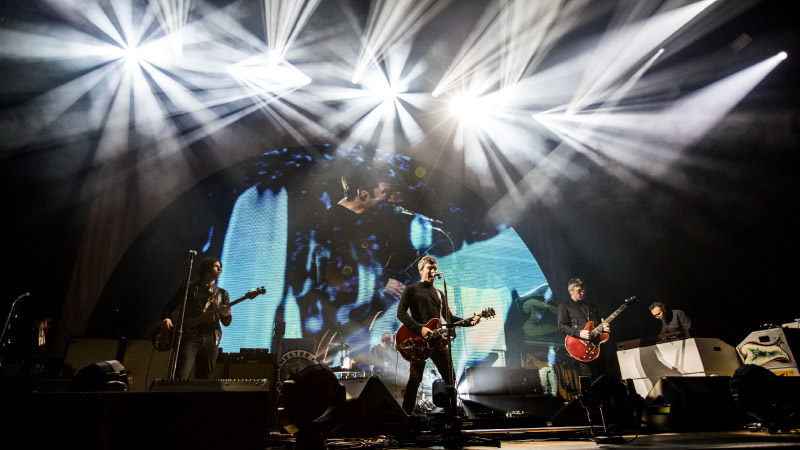 PRG: When did PRG get involved in the design process?

CONVERTINO: I always design with the Best Boys in mind. This tour is no bid. We know we will work with PRG as soon as Noel decides to go out. 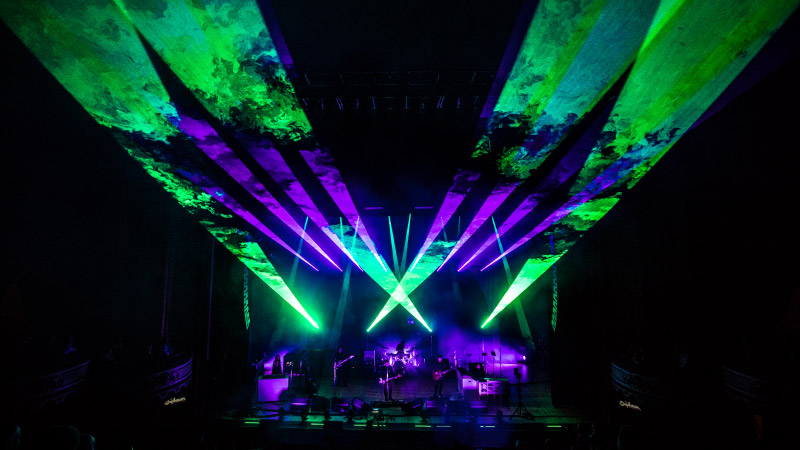