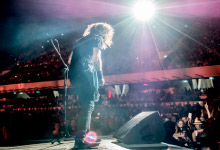 Designing for a wildly successful band like the Foo Fighters, who are all about the music, means supporting the intimate relationship between the audience and the band members, often at very long distances. "That's one of the great things about music. You can sing a song to 85,000 people and they'll sing it back for 85,000 different reasons,” frontman Dave Grohl told the Guardian back in 2013. Lighting designer Dan Hadley is the man tasked with maintaining that kind of magic in both stadium and arena settings. 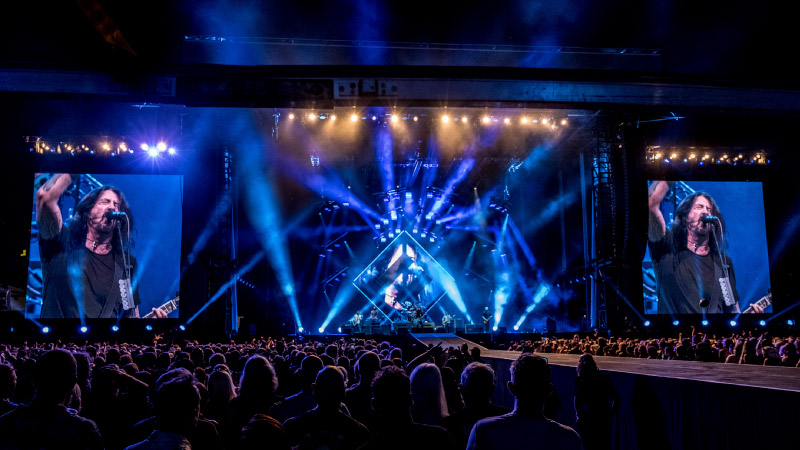 PRG: What inspired the stage/lighting/video/set design/vision for this tours design?

HADLEY: The FF logo for this album was a real easy place to jump off from, I knew immediately that it was going to play really well with beams and we’d be able to work in lots of combinations of 45º and 90º angles. The flying screen, of course, comes directly from there. 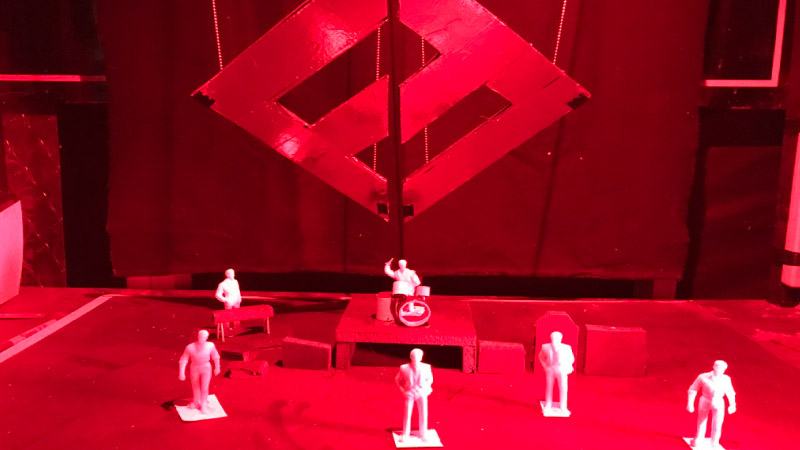 PRG: What was the overarching goal for the client/artist to achieve with this design?

HADLEY: Our goal is always the same- to make sure that the energy from the stage is translated to the audience and a connection is cultivated. I’m not typically very video heavy in my designs, but with this band I need to get their faces to the back of a large crowd so that everyone can see the interaction between the band members and hopefully feel as part of the experience as all the people who are closer to the stage. The other half of that equation is making sure that the band can see the whole crowd. The only thing that Dave says more than ‘motherf#@%*&’ is ‘Dan, light 'em up’ because he needs to see ALL the people, it’s this reason that we carry a triple layer of fixtures that will never throw light on the stage- it all goes to the crowd. 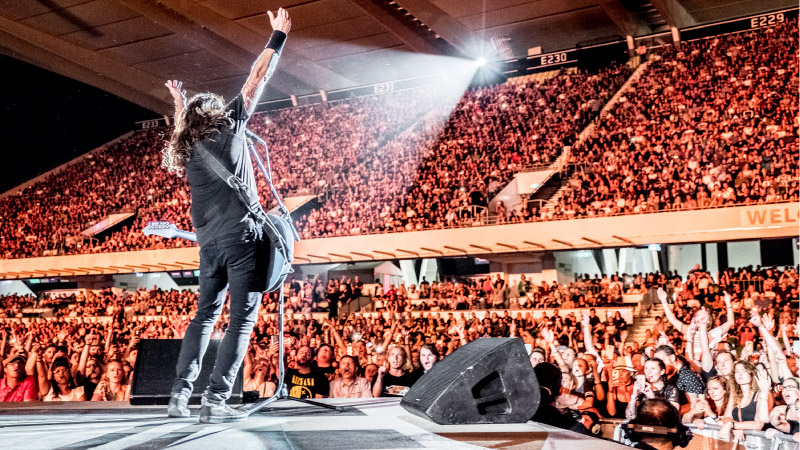 PRG: How many years have you work with the Foo Fighters? Describe your relationship.

HADLEY: I started sporadically filling in as LD for one-offs around 2001 and took over full-time when the position opened in 2011. During those years I was around the camp a lot because I was working for their friends- Weezer, Queens Of The Stone Age, Tenacious D, etc. In 2009 I designed and directed the tour for Them Crooked Vultures which featured Dave behind the drum kit instead of DSC. We never discussed Foo Fighters during that whole tour, we were all just having fun with this crazy project and doing a bunch of exciting shows. When I took over full designer duties I already knew everyone, which made it pretty easy. They don’t often talk much about design and I try to keep the conversations short and to the point and glean as much information that I can from those little bits. 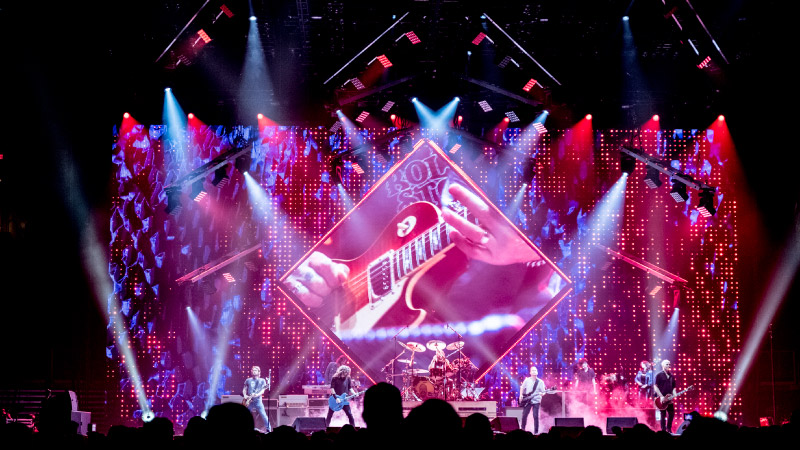 PRG: Describe the process for identifying the design needs and design process for this project.

HADLEY: First it starts with trying to get any specific ideas and desires out of the band. Then I look at the routing to see what sorts of shows we’re doing- how many stadiums, arenas, festivals, etc. so I know if there’s a place to concentrate the bulk of the efforts- but we’re always going to do every type of venue so I have to make something that is flexible enough to work in all of them. That’s not to say that it fits in all the spaces, if it does then it must not be big enough. Hopefully, I have some artwork to incorporate- then I go to work in my shop and start cutting, tearing and taping bits of paper in my little .5” scale stage and a maquette starts to take shape. I like the analog approach because I enjoy being able to manipulate things with my hands and see everything from multiple angles without using a mouse. I know that I’m going to be spending far too many hours on screens in the coming months, so it’s nice to just mess around for a while and let the tactile world inspire some of the design. I started with flats of the FF logo and worked for a long time trying to get them to change or disappear, but finally left them together as the video wall, so when lowered just above the band it could also be used as a light source. 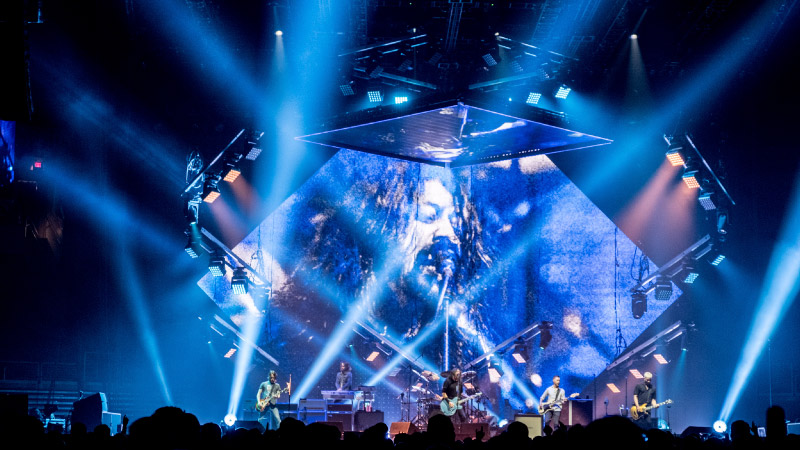 PRG: What was your favorite aspect of this tours design?

HADLEY: The flying screen definitely provides a good changeup in the spatial arrangement of the stage, and I really like the way that it plays against the upstage LED wall. That wall is a lower resolution, which looks fine but makes the diamond look great by comparison. The flying ladders are also a lot of fun, getting to change the shape of the rig makes a 3 hour show a little more interesting. We made those with the lights attached to rolling rungs, so that the lights always maintain a vertical position, allowing me the freedom to more easily combine different ladder configurations with different lighting looks than we may have rehearsed. The band is not very interested in sticking to a set list so we have to be ready to roll with the punches when they’re thrown our way 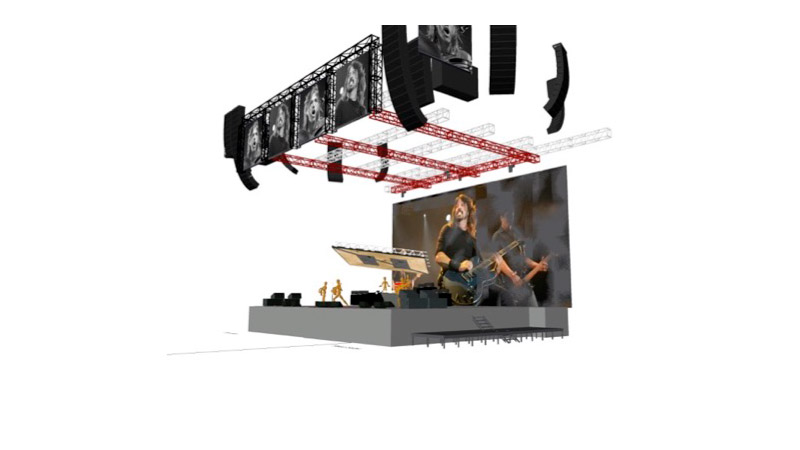 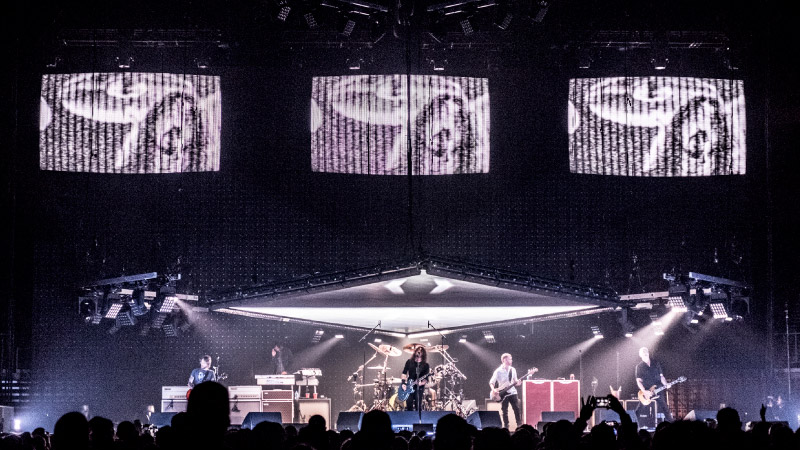 HADLEY: It’s a 20’x20’ 9mm WinVision Air screen with a border of 24 GLP Impression X4 Bar 20’s. The lifting mechanism that SGPS made for it has four winch lines with four belt-driven redirects to carry the lift points Upstage/Downstage. 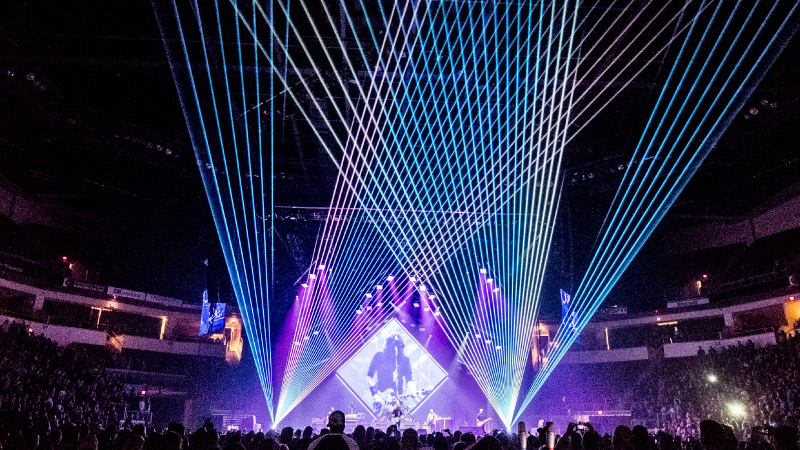 PRG: Tell me about your crew. Who were the key players to pull of this production?

HADLEY: John Wiseman has been leading the charge for us since the start, our relationship carried over after PRG’s acquisition of Chaos Video, who was our video vendor for previous tours. Eamonn McCullagh looks after us from a gear perspective and whether we need some extras sent to SGPS for testing a new gag, or it’s just broken and needs replaced, he’s very quick to respond.

PRG: How did you work with the PRG team to bring this vision to life? Describe the partnership/collaboration.

HADLEY: When we first started the tour in the summer of 2017, we were doing a short-ish festival run and wanted to keep the package small and flexible and save our big guns for the fall when the album came out- but we had some big slots, such as headlining the Pyramid Stage at Glastonbury. For this scenario I wanted to make sure whatever fixtures we were bringing were going to pull their weight so I was very specific about them. John helped us get the required Magic Panel FX’s and the Solaris Flare Q+ LR units. I liked them both a lot for that run and the choice was easy to carry them over into the big show, especially with the square face of the panels and the square FF logo. I was also particularly keen on using the GroundControl Followspots, in order to keep the ambient light levels down and to maintain a consistent angle from the house spots. Dave isn’t fond of the spots in his eyes and it’s so incredibly nice to be able to control the intensity from the console, without the delay of having to communicate with an operator. We have six Best Boy GCs on the stage and two Longthrow GCs in the house and I never want to go back. Since John was so helpful in arranging for all those shiny new fixtures I was happy to fill in the blanks with PRG products like the Best Boy, Bad Boy, and Icon Edge. 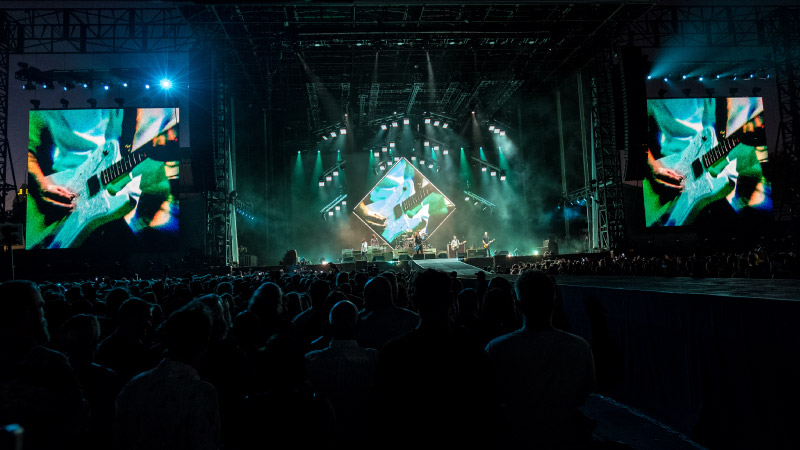 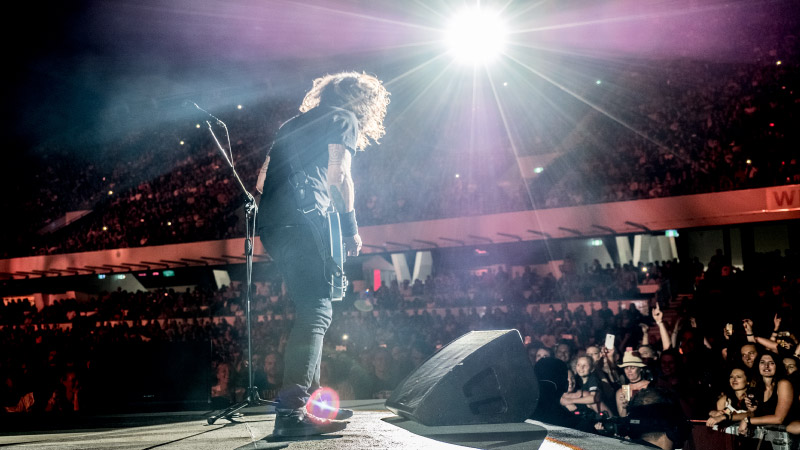 PRG has supported the Foo Fighters Concrete and Gold Tour with lighting and video solutions. The tour began June 16, 2017 in Reykjavík, Iceland and is set to conclude October 18, 2018 in St. Paul, Minnesota.