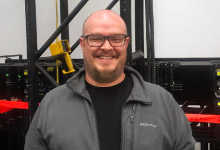 “Knowing design, production and how systems work helps, but more importantly, if you can just reach people on a personal level to find out what motivates and drives them, then you’ve found your ‘in.’”

Jim Hutchison is a lighting industry heavyweight who works out of the PRG Dallas office. Jim helps facilitate understanding and harmony between PRG’s engineering and product management teams. He describes his role as “acting as the bridge between what the customer wants, what the designer wants and what the people who built the industry want.” In addition to running his lighting news blog, JimOnLight.com, he is also a writer and lighting designer. We had the chance to chat with Jim about his passion for lights, inspiration, and some of the technological advancements he anticipates coming to the industry in the near future. 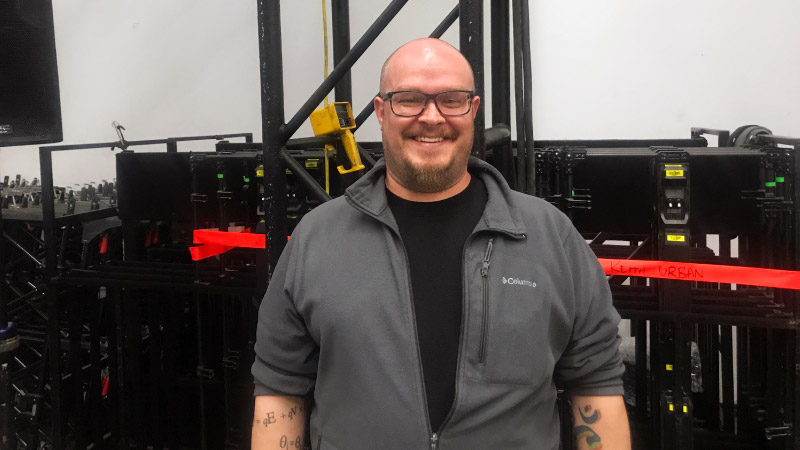 PRG: Tell me about yourself and how you got into the entertainment industry.

HUTCHISON: I started out in this business as an actor in undergraduate school. I ended up going to one light hang and I got hooked. My dad is an engineer, so it kind of runs in the family. I went to school, changed my major to lighting design, went to grad school, did some touring and it’s been kind of crazy since then.

I started out as a lighting designer, but my passion kind of turned into the development side of things. I worked for Cast Software for a while developing the WYSIWYG and Vivien Event Designer Suites with a team of amazing brains. Those kinds of things will hook you. You do shows for so many years, go out there, beat the pavement, run cable, hang trusses and stuff. You gain the secondary skill set, which really becomes the primary skill set of knowing what it is that people want and what kinds of technology you can create to make people’s jobs easier in this business. You know, we all have hard gigs. If you’ve been on a show site, you’ve seen people work hard. Things are technologically challenging and heavy in our industry.

I worked as the Customer Engagement Manager at Chauvet Professional as the bridge between their engineering division and the marketing department. I helped those branches talk to each other, and initiating those conversations is one of the things I’ve enjoyed the most over my lifetime. People in the engineering side and creative side often have boundaries, and I love to help bridge those gaps.

PRG: What do you think makes you successful at that? Speaking both languages?

HUTCHISON: Yes, I think knowing design, production and how systems work helps, but more importantly, if you can just reach people on a personal level to find out what motivates and drives them, then you’ve found your “in.” I’ve found that people who are extremely intelligent sometimes have difficulties on the social side, and people who are very social often are that way due to a lack of understanding of the details of the work we do. Having a combination of the skills helps bridge those gaps in understanding.

PRG: Can you tell me more about the first time you hung a light? What attracted you to that experience?

HUTCHISON: As an undergrad, I went to that one light hang for a show. I put a light on a pipe and tightened that sucker down, and the idea of this system that I just put in the air, that I am going to feed power to this system. It’s not just a lightbulb, it’s a piece of science. There’s a reflector and a high intensity spot of light stuck directly in the middle of some trigonometry that then goes through optical glass and goes out through the front of the fixture and can then be tuned and shuttered and you can put a gobo in it and adjust the aperture! Really the whole system of the light itself drew me to doing this work for so long.

Some of the technology we use in this business is taken from the military and is created to solve a problem. I went to a school where our training was banging out shows. I easily did at least 30 in the span of my undergraduate education. That really got me hooked into doing this. You get better at it, you find out what things frustrate you and what things you like. You’re able to take a mix of those things, which is human interaction and behavioral principle. Our lights are little systems, and that idea is what really drives me. There’s a lot that goes on inside a light!

I am currently writing a piece for my nerd blog, JimOnLight.com, where I try to use lighting and gear to explain scientific principles, like entropy. How many things are meant to go wrong in a light, like a fixture which is a chamber for an explosion happening over and over again. How to dissipate that heat, make sure the internal components don’t fail each other or melt, while still needing to be fragile. There’s so much there that drives me to find the next new thing, to innovate not only for designers, but for the science of our industry as a whole.

PRG: Is there anything from your personal life that inspires your lighting design?

HUTCHISON: My dad is one of my closest friends and he was a Navy guy. The stuff that he experienced as a Navy engineer in the 70’s were the things I grew up learning about. Pressure, steam, fluid mechanics: the things you run into on a Navy Vessel. My father really instilled in me the art of knowing how to solve a problem without panicking about it. This comes from knowing the system and how it works: this is supposed to happen, this is what’s happening, why is it happening and how can we get it back to its original intended state? If you can think calmly, you realize that a light is meant to work in a certain way and it becomes easy to diagnose. My dad has been a motivator and has had such a big impact on my life.

PRG: How did you find PRG?

HUTCHISON: Chris Conti is a longtime friend of mine. He flew me up to Secaucus to see a Bad Boy to write about it. In all of those times, I got to see how a Cadillac fixture like Bad Boy and Best Boy with all these internal components that are meant to be swapped out can operate while still being a really high-quality, well-built machine. The feature set included this one-button procedure where you can open the lenses in a certain configuration to allow for easy cleaning. That was a big deal then; the innovation made an impact on me and it still does now, the idea of making tools directly for the people doing the work.

The engineering team, the project management team from PRG, these guys are my heroes. People like John Covington, Tom Walsh, Dale Polansky, Andrew Spilberg, Clay Powers, they’ve been there since there was no established industry. Every day when I come into work I get to work with my heroes, which is pretty freaking awesome. PRG has been on the forefront of not only technology, but also the business of entertainment production. Chris made it clear when he said to me one time: “We are a production company. We make lighting fixtures and technology so we can make better productions.” Now I am on the end of that where I get to help make the fixtures and technology.

I just got off the rehearsals for the opener of the U2 tour where the GroundControl system is being used. Just that system alone is one of the most amazing pieces of entertainment technology because not only does it put a robot in the hands of an operator in a remote location, but it also takes people out of a really potentially dangerous situation. You have truss spot operators who can still do their jobs, but now safely from the ground. There’s a lot of stuff that’s happened in the industry with major accidents and people dying for entertainment over the years, and I find that PRG’s technology and the way we’ve been going at it is geared at making our people safer while making shows better.

PRG: To that point, where do you see the industry going in the next 5-10 years? Are there any advances you’re really excited about?

HUTCHISON: Data communication is a big one. PRG has a series 400 system which is power and data being managed in one system, and it’s outstanding. We also use fiber optic communication all over in our systems. As that grows, we are still sending the same standard DMX512 since they became standard. DMX hasn’t changed much, and all the lights and controllers use the same stuff. What’s cool about fiber technology is that we are able to send a regular DMX over long distance with signal that is solid. You’re able to send a lot of information over these glass fiber optic cables. As we as an industry figure that out more, we may come up with a protocol that is more efficient than DMX512. I think as we grow, things like talking via light will become more commonplace. For example: we are already experimenting with LIFI against WIFI where light is being used to communicate data in the commercial market. We are doing that with DMX in a little bit of a different format, using light to communicate back and forth between GroundControl and the Bad Boys, Best Boys and Followspots. As that grows, I think we are going to see things like RDM (Remote Device Management) get better, see a standard attached to it, and with universal development. That’s where I see the future going right now.

PRG: What is your proudest professional moment?

HUTCHISON: One of my proudest moments is when I joined the Cast Software Company. We got a lot of feedback from users who were really digging the new feature sets we were designing for them. When you’re making a product for a specific subset of people, it’s awesome to know that what you did really improved what they were doing. Being able to provide solutions to those lighting designers was so gratifying, and I continue to strive to replicate that result throughout my career.