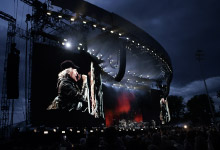 PRG has worked with Bon Jovi for almost 20 years. The band and the technical production solutions company are a great match, as they share a commitment to cutting edge technology. “Jon Bon Jovi always wants to push the envelope for what is the best,” says Tour Director Paul Korzilius.

Bon Jovi is currently out on their This House is Not For Sale Tour, where they’ve implemented a fully 4K camera and LED system, along with a PRG Ingest system to streamline storage of the large files of footage they capture every night of the tour.

“The 4K system definitely stands out, from the file sizes to the pictures that are up on the screen, everything about it is big. That’s the way we like it here at Bon Jovi - big,” says video director and brother of JBJ, Anthony Bongiovi. To achieve that look, ROE CB8 LED tiles are housed in PRG SpaceFrames™.

Watch the video to hear more from the incredible crew and see footage from their Dublin stop on the tour.