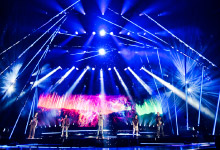 Join us for an inside look at the Backstreet Boys DNA World Tour in this exclusive 6-part series. PRG goes behind the scenes with the producers, designers, choreographers and the boys themselves as they have their first look at the stage design and dance their way through rehearsals. Producers walk us through design concepts, share what it took to visually represent 25 years of Backstreet Boys songs, and explain how PRG has become a part of this tour’s DNA.