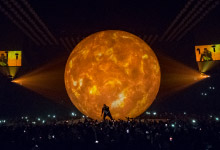 Tour Director and Designer, Steve Kidd, and Lighting Director and Designer, Guy Pavelo, have both worked with Drake for more than five years, designing multiple tours across the globe. During this time, PRG has partnered with Drake’s team to deliver lighting and video technology solutions to achieve visual experiences that push the boundaries of creativity and defy the norm. Steve and Guy sat down with PRG to talk about the current tour design elements and PRG’s role, including the integration of a kinetic LED lighting system, curved video wall, array of lighting fixtures from high brightness beams to remote followspots along with video projection. 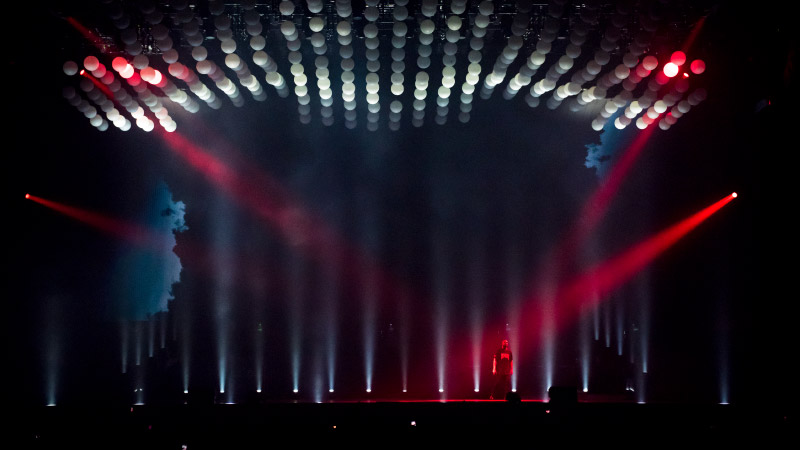 What was your approach to the design concept for the tour?
Guy: This was the fourth master rendition of a design we spent five months planning, reflective of inspirations gathered and a conglomeration of different elements Drake liked most. For example, one of his team members found a stop-motion video of an art installation in Japan, featuring little baseball-sized shapes moving in one pattern over the course of about six hours, but since it was stop motion it looked like it took 20 seconds. This video served as the inspiration for our ball and winch set-up enabling us to recreate the look and feel of the art installation. To actually execute the concept on tour, we had to develop a gridwork for the spheres so they would not spread out across the whole venue. Otherwise, the visual effect wouldn’t make sense to anyone except in the last row. 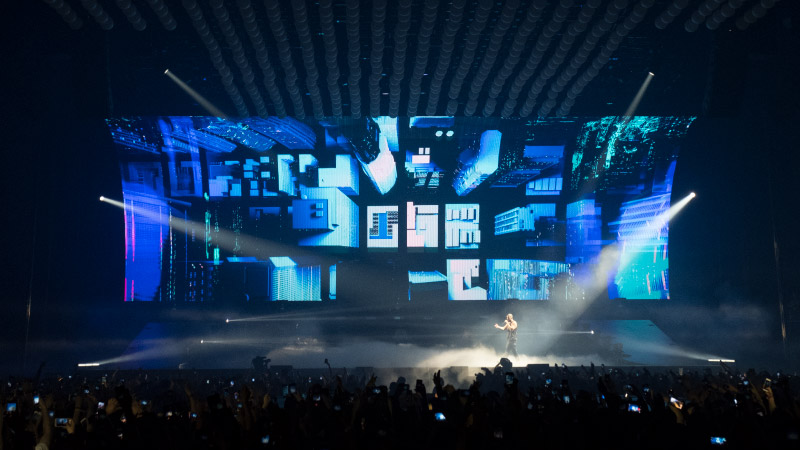 How do you create a design easily toured around the world, packed back into trucks and then loaded into different venues?
Guy: A good part of that planning effort involved working closely with SGPS to build some of the design elements, from the curved video wall to a custom truss. We went with a 48-inch, double-bay truss with a shorter leg set and cast assembly, so that almost every lighting fixture on the show stays in the truss. Yes, the truss is big and consumes a little more floor space, but there are 700-800 winches up there that never need to be touched again. If we went thinner, we would have a cart with pipes and poles, and we’d have to hang everything each day. It saves time, personnel, potential for failure and truck space.
Steve: When building a new production, we’re always up against time. Time and space are the two things we consider – particularly how much time we have to build the show and how much space assembling will take inside the venue. Guy: We’re at venue capacity in terms of what we can actually rig, but crew members aren’t killing themselves to load everything in. We were fortunate the budged allowed extra spending on a custom truss, so we could save the crew a little. 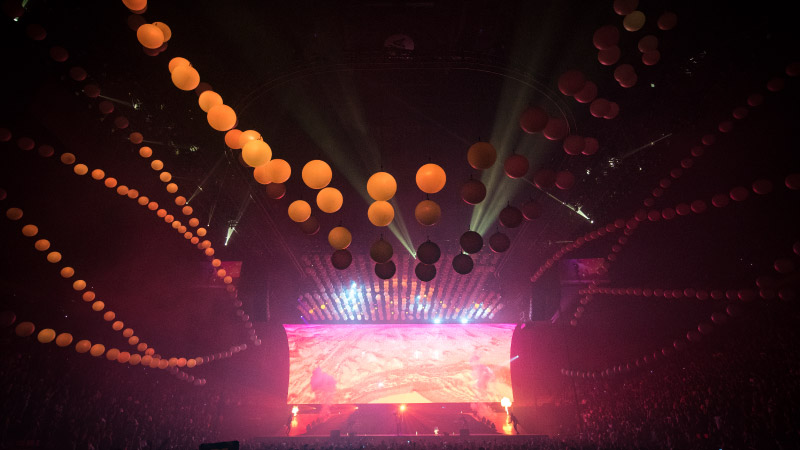 Let’s talk about the curved video wall built from 9mm LED. How did you come up with that idea?
Guy: We started with the curved wall, then we created the set with the lifts and other elements Drake liked and added the overhead structure which encompassed some of the house rig. With the kinetic addition, the last pieces were finally tied together to create the system over the deck.
Steve: That’s our relationship with Drake. We come to him with our ideas, what we believe would be great concepts, he then takes those ideas and bends them a little, as all great artists do. We then create a reality, knowing what our vendors are capable of and realizing how we can actually tour it.

Back to the kinetic moving spheres -- they are such a notable part of the show and wow the audience at multiple points during Drake’s set. How was the system developed?
Guy: The kinetic spheres are a collaborative project. Glow Motion Technologies (GMT) gave us all the pieces. It’s actually two different components: the physical plastic sphere and the LED chip inside. The winch is from Stage Kinetik, the hard-powered winch, data and control. However, GMT handled acquiring all the necessary elements of assembly.
Steve: The winch does all the work. Initially, when Guy and I first started talking about this design, it wasn’t a sphere, but by luck we got these spheres from a mutual friend of ours. They were sitting in storage from being used at an auto show in Germany. The spheres are the design showcase, but without the winch, they simply don’t work. Guy: It’s like an art installation where the lights just go on and off. After a few seconds, you’re done looking at it. With the winch, you continue watch the different look with each song 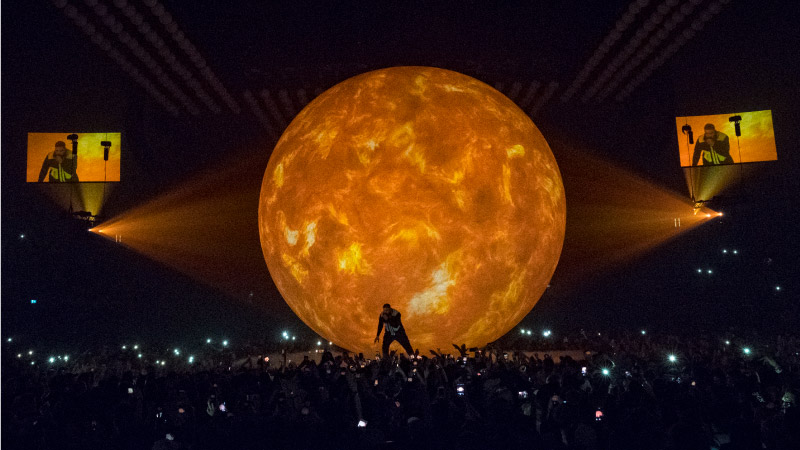 A major addition to the show design for the European leg was the projection globe. Drake wanted to give everyone in Europe a different show than in North America. The addition of a B-stage and the globe with projection meant some adjustments to the kinetic system. Can you talk about the inspiration behind the European projection globe?
Guy: That inspiration came from an art installation that happened in Toronto this past season. It was called Death of the Sun, a 45-ft round sphere on top of a projection-mapped pedestal over a 12- to15-minute progression on the different stages of the sun. Fortunately, the creator had worked with Drake before, so one phone call secured the ideas and the original needed to get the ball rolling. Two days later, we had an object to start playing with here in Europe. We have eight Panasonic 30k laser projectors, which drive the globe itself; four double-stacks in quadrant; and d3 and Blacktrax to map and track the ball as it’s inflated during the show, so we can realign and hit it completely. 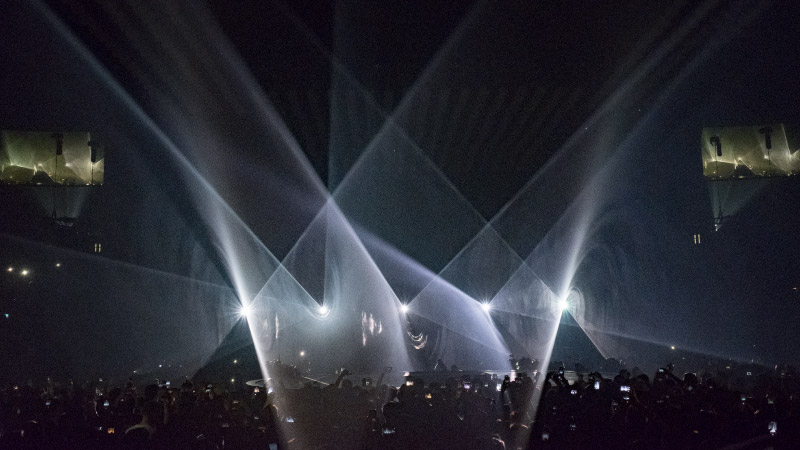 The addition of the globe meant a quick change to the set-up in Europe, for which PRG needed to add projectors and media servers. How’d we do?
Guy: We called up Yvonne and said, “we’re going to need a substantial amount of adjustment to the design.” PRG opened the shop back up at the weekend, had personnel loading the truck loading on a Sunday and we had the equipment that Monday, which I know doesn’t usually happen. It was a rush, but every single fixture worked and every one of them was clean, waiting for us to show up that morning. It was fantastic. PRG said, “just give us the list and we’ll figure out how to deliver it.” 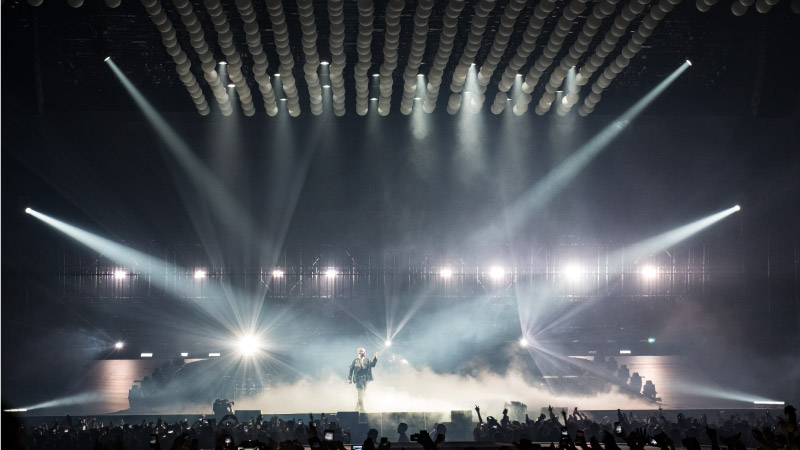 Another addition for Europe was the use of Barco projectors and their moving mirror system. How are they used?
Guy: They are a concept High End designed in lieu of lasers. Barco projectors are not laser projectors, but you can put content into them to make them look like a regular laser. You can broadcast out over the audience with no regulations, health or safety restrictions, and it gives a different look and color. You don’t get the super-vivid green laser beam but, past that, you get a unique effect, which works really well toward the end of the show. 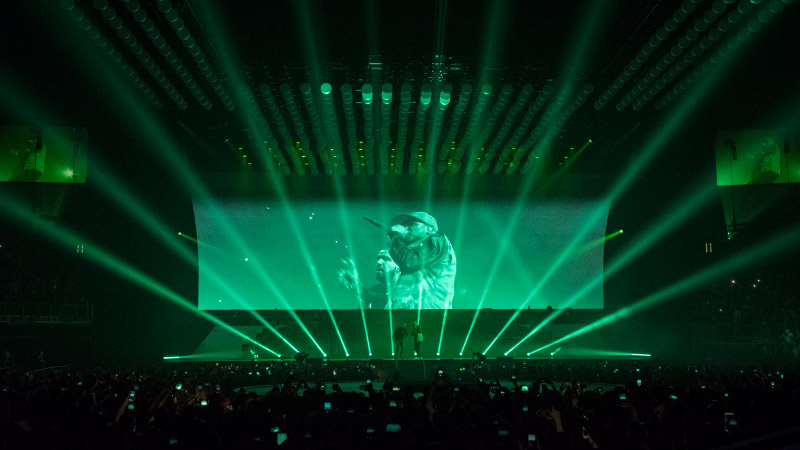 The lighting for the tour was designed to complement the kinetic sphere system with many fixtures chosen for their compact size, energy consumption and high brightness and impact. What thoughts were behind choosing the lighting fixtures?
Guy: We have a range of fixtures – PRG’s Best Boy Spot HP and Washes, a small boat load of the Icon Beam, Clay Paky Sharpy and Stormy, SGM P5 and Q7 LED fixtures, a quantity of the new High End Solaspot 1500 and LED Solawash 37 with Martin Atomics and GLP XBar 20 fixtures. The spots and washes are used for overhead coverage, firing through the winch and spheres to cover the deck. We went with the Icon Beam, because it is bigger than Sharpy and Drake wanted a different look. We needed a very specific size range to fit in the truss, so the truss could fit in the truck. In result, the beam’s width and compact head really worked out. For Europe, we added the P5 and Q7 to give a different mood and house coverage. The team chose PRG’s GroundControl™ Followspot system to situate the fixture on the truss, but with the control unit on the ground. They have two operators at the front of the house and four backstage, because the show is built in two halves – a forward U, which includes the B-stage and the main stage package. 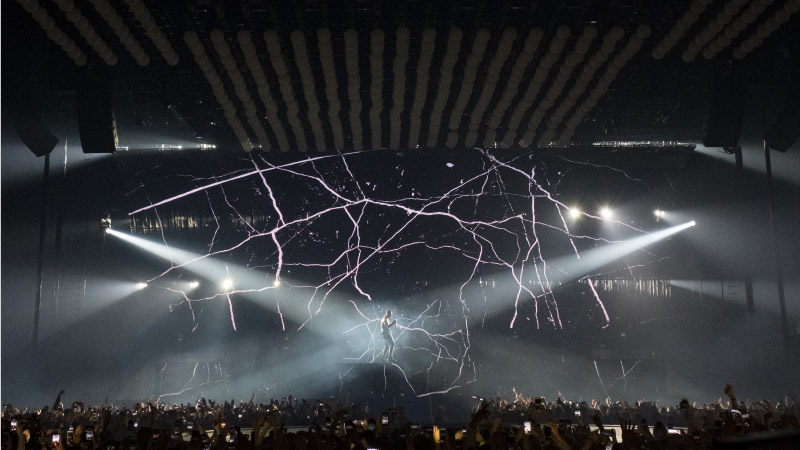 You both have worked with PRG globally for a number of years to support tours you design. In your opinion, what is the key to the success of this partnership?
Steve: PRG has been an excellent solutions provider for every aspect of all our designs. What I love is the support, not only from the sales side, so Guy can achieve the dream he’s trying to deliver to the artist, but also the ability for PRG to stay on budget. We can say, “what do you have that nobody else has used yet, or that has just come out and looks amazing?” In result, we get amazing crew support and a great product. PRG has been great for us, both domestically and worldwide, and a great supporter of Drake. Now that PRG owns video companies, we can get lighting and video solutions all from one source. One of the hardest things in touring is getting different vendors to blend together.
PRG has a cohesive team that works together. It was important for us to work with people who wanted to be partners, and I know a global partnership means a lot to both Curry and Yvonne – we can count on them. Drake is one of the biggest in music right now – selling more albums and selling-out more venues than any other artist currently, so his expectation is high, and as the designers, our expectation of our vendors is also high. 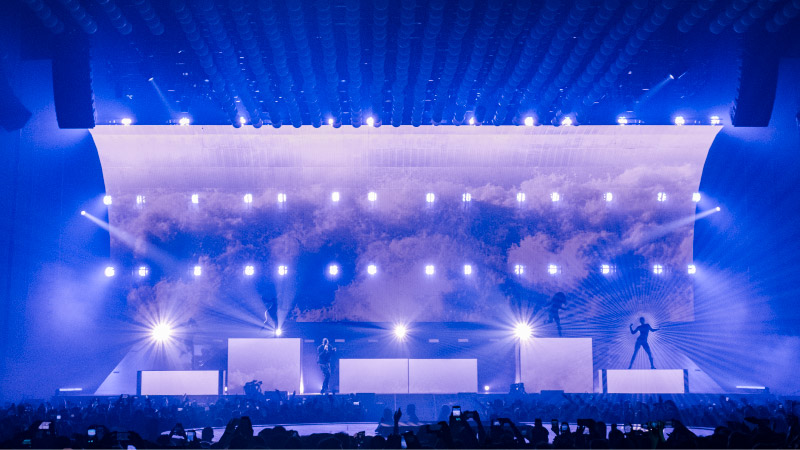