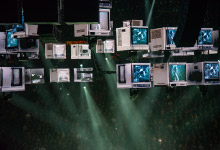 A dizzying array of flashing LED cubes descended from the truss above Metallica’s 360-degree mainstage setup on the Las Vegas stop of their “Hardwired… To Self-Destruct” tour. This was a show designed with the entire crowd in mind - even the nosebleeds had a great view.

A photographer raced by with purpose, sweating bullets to get all the shots – no easy feat when the band members rotate positions at their own will. Microphones were set up on all sides of the stage while Lars Ulrich and his drums sat in the center on a circular platform. Fitting, as Ulrich is the heartbeat of the band as well as the one who put out the ad in the pages of The Recycler looking for “other metal musicians to jam with” back in May of 1981. Of course, vocalist and guitarist James Hetfield answered that ad. Thirty-seven years and 11 albums later, they stood together onstage with guitarist Kirk Hammett and bassist Robert Trujillo to play to a sold-out crowd of 17,000. 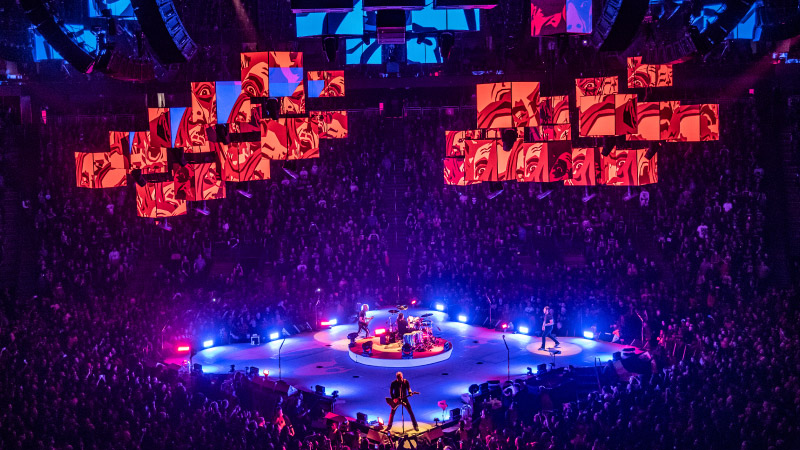 Show Director and Set Designer Dan Braun has been with the band for 23 years and is responsible for the immersive design on this tour. Four-hundred and sixteen CB5 tiles made up 52 4-sided kinetic LED cubes that hovered above the stage, seamlessly rising and falling to form a labyrinth of shapes, echoing the complex instrumental arrangements that make Metallica great. Below, a 44 by 44-foot square mainstage served as platform for the band as they grinded out hit after hit for a solid two hours. There’s nowhere to run when the stage is a square in the center of the arena, and there are no breaks when there’s nowhere to hide. 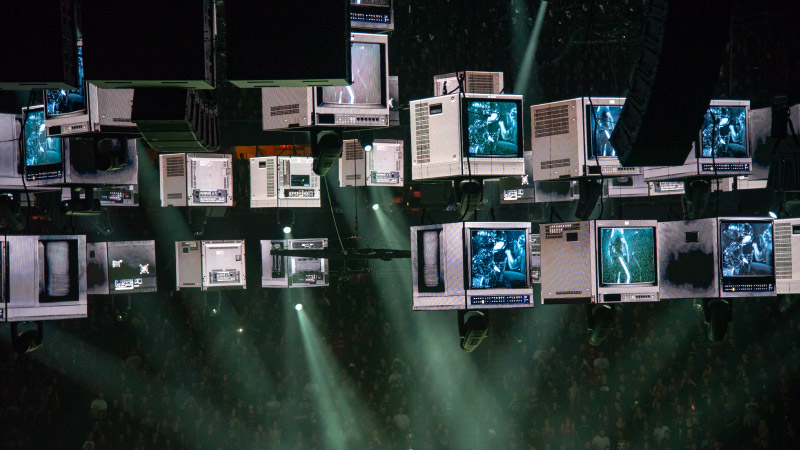 Four-hundred and sixteen CB5 tiles made up 52 4-sided kinetic LED cubes that were featured in the arena portion of the “Hardwired..To Self-Destruct” tour

The pulsing opening track of both the 2016 album and the tour, “Hardwired” kicked off the night with roaring energy. The cubes were high in their initial positions, transformed to become television sets from the 1980s. Live footage of the band played on the television screens, all in static and black and white. This acknowledgement of the band’s nostalgic appeal paired with new music the crowd was audibly excited to hear was a power move. Very few bands of this age continue to command an audience with new material.

Video Director Gene McAuliffe sat like a pilot backstage in video world behind his control desk, queuing the live footage of the band from 16 different Robocams. Using all robotic cameras on this tour was a unique idea that solved one problem, while also posing its own set of challenges.

“The benefit was that we could place so many cameras around the stage and still have a very discreet presence to the fans,” McAuliffe explains. “It allowed us to cover the entire stage without any operators being in the way of the fan experience.

They had an operator’s station set up back stage where three techs controlled four cameras each. This was where things got a little tricky, because operating four cameras off one controller is no easy task, and they could only see what the camera saw. Having skilled operators was imperative. 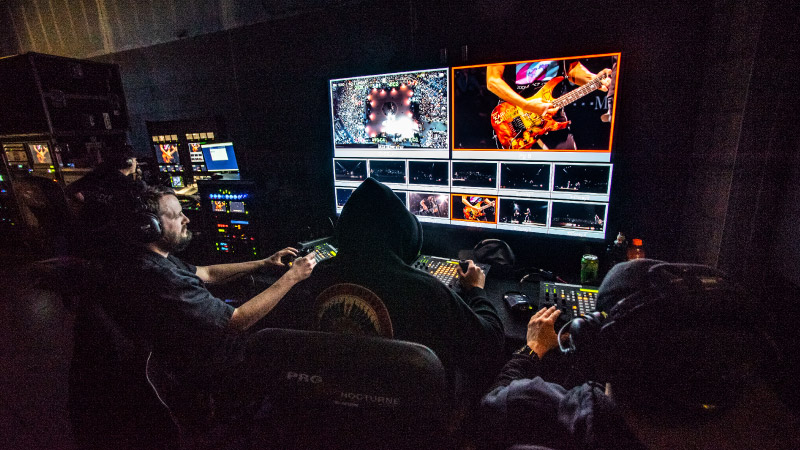 “This plan added a lot of infrastructure needed to get all those video signals and camera control sent from the stage to the video production system. We had some bumps in the road, but we found the tricks and people needed to make it work.”

McAuliffe started off as an engineer with Metallica in August of 2016. He quickly moved up to become Assistant Director, and has since moved over to the Director’s chair, where he sits now.

“Gene has done a fantastic job combining his experiences to fill so many roles with this band,” says Mark O’Herlihy, PRG Account Executive for Metallica. “Very few people could do this job the way he does.”

“I worked quite a few shows with some of the original creative team and current production crew, so we spent a lot of time in the trenches together already,” McAuliffe explains. “When we started up the stadium tour, I spent a lot of time programming the Mboxes and helping the design team get their ideas into reality.”

As Video Director, he works closely with the other visual departments to continually put out successful shows, night after night.

“It was quite a different show during the arena run, where there aren’t large IMAG screens as a main focus of the set. But we still capture the entire show for archiving purposes for the band and any sort of media releases they put out,” he continues. “During the build process for the show we all found the victories and challenges with the original design. It’s a really complex project that continually grows and changes over time.”

One of the biggest challenges was to give every song its own individual look. 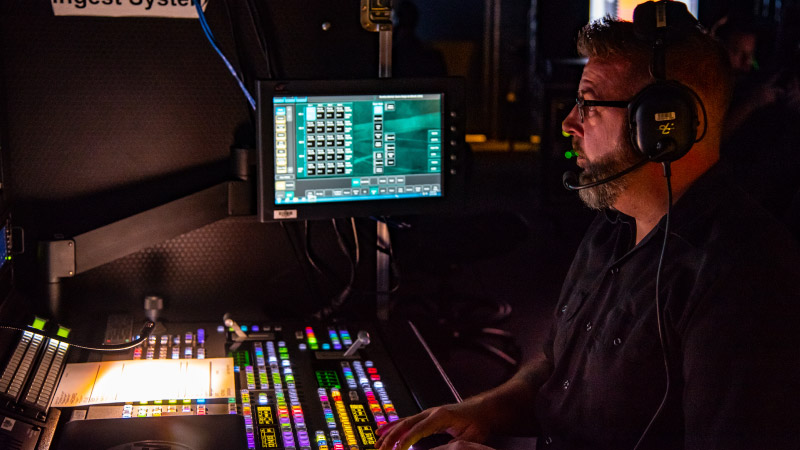 Video Director Gene McAuliffe’s workstation, next to the custom Ingest System that PRG created for Metallica.

“This was the hardest yet most exciting part of the project,” explains McAuliffe. “It allowed for video, lighting, and automation to all be a part of the creative discussion. Constant discussion between Dan Braun, Lighting Designer Rob Koenig, Automation Director Michael Pettit, and myself about the looks of the show created a huge pool of ideas, some that worked and some that didn’t. Over the course of the tour we have all continued to discuss the looks and new ways we can play with the show that we have been given. The design as a whole opened up so many possibilities that it continues to grow and change over time.”

Warped faces of the band faded into red. Red became neon imagery from the Las Vegas strip. Cubes rose and fell into shapes that were unique from every vantage point. The ever-changing video content on the cubes was controlled by Disguise operator Cameron Pigou, a soft-spoken Kiwi with some serious video chops.

“I look after everything that goes onto the screens, so the video infrastructure and fiber system to deliver the outputs to LED, as well as operating the show every night,” explains Pigou. “I have to know the music by heart, be able to adapt to any challenges the band may give us setlist-wise as well as update content daily and do programming for additional looks we need. I also look after the integration of the automation and lighting systems into the servers and make sure everything is operating as it should be.”

Disguise is the core of the entire video package on the tour, provided by PRG.

“It enables us to effortlessly output eight 3G SDI feeds to all the LED screens, and because Disguise is a full 3D environment, we could use the various mapping types, particularly parallel mapping, to virtually project multiple pieces of content up to 4K resolution across multiple faces of each screen,” says Pigou. “No other product on the market allows us to utilize that vast amount of canvas in such a comprehensive package.” 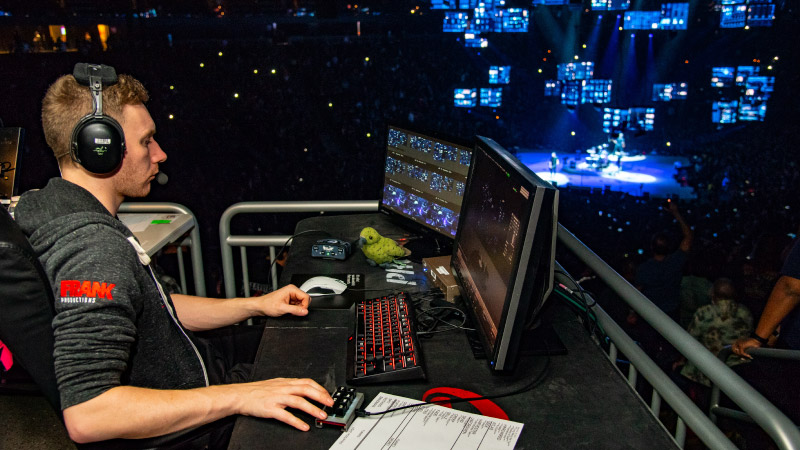 Pigou set the system up to be highly adaptable to the needs of Lighting Designer Rob Koenig, who was able to use the screens as lighting fixtures. Because they could be turned into a lighting or video element, this gave him a whole other design surface to play with.

“The system took multiple Art-Net inputs for lighting as well as automation. With the servers, we set certain perimeters of the content that Rob had control over such as color and intensity to match his various looks,” Pigou continues. “We run a custom version of the D3 software in which our programmer Andrea from Nocte Studio created some modules that allow Rob to control the individual faces of each screen, essentially turning the 52 Video surfaces into LED lights with the push of a button.”

This added an extra depth to the overall visual design, as Pigou could run content in the background while Koenig ran lighting effects over the top to achieve chases or strobes timed perfectly with the music and the rest of his lighting rig.

Disguise was also used to seamlessly integrate the automation, provided by TAIT Towers, so the crew could see and program to the movements of the cubes in real time.

“We also made extensive use of Notch throughout the show - at least one third of the possible songs the band performed had Notch effects or Notch-generated content running,” Pigou says.

When he mentions “possible songs,” Pigou is referring to the band’s setlist, which changed every night of the tour.

“We didn’t see a setlist until five minutes before the show begins because there were rotating spots,” explains Pigou. “So, the show was designed around the concept of having slots where the band can change the songs and we can have looks that fit into those songs without conflicting with the staple songs that are played every night. Most of these slots are where Rob and I play around with the cubes as lighting fixtures and I have songs and content that we can utilize while still maintaining a unique design and experience for the crowd every night.”

All the thought that went into this really made the difference for the crowd. GA seats got an intimate, classic concert performance. Mid-level tiers saw the cubes transform into different shapes, while the top tier got the full experience of the LED design.

“With this design, Dan has pioneered the best way to make an arena show both unique and enjoyable from every seat in the house and has set the benchmark for other shows to follow,” says O’Herlihy. “There isn’t a bad seat in the house.”

The final North American leg of the tour wrapped on March 13, 2019 in Grand Rapids, Michigan. From there, “Hardwired” will move onto a full European stadium tour and finally, Australia and New Zealand. The majority of the crew will continue on the road together, with some additions to accommodate for the completely different stadium design.

“We have had some really tough days in the cold and rain that nobody enjoyed but we can all look back on them now and chuckle,” says McAuliffe. “That’s one of my favorite parts of touring, there are good days and bad days but all of them together create friendships and memories that you will always have.”

That positive sentiment echoed throughout the crew.

“Everyone is pretty much one big family out here,” says Pigou. “Each department works so closely with one another, that there’s no room for people who don’t get along. We all have a good time while doing our job and getting paid to tour the world. Can’t get much better than that.”