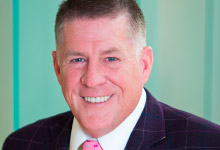 PRG is mourning the loss of Darren P. DeVerna, CEO of Global Theatre for PRG, who died Thursday, May 21st, following a battle with cancer. DeVerna oversaw PRG’s theatre division, consisting of a full spectrum of production solutions including scenic technologies, rigging, video and projection, lighting and sound for Broadway, the West End and touring productions. DeVerna was also a prolific producer with numerous shows to his credit.

DeVerna grew up listening to stories of the Great White Way from his father, grandfather and uncles who worked in theatre. He followed in their footsteps and became a fourth generation DeVerna to enter the business, becoming a Broadway stagehand in 1977 and a member of IATSE Local 1. DeVerna spent his early career at Four Star Lighting, which he was instrumental in growing into one of the major lighting companies serving the Broadway market. He was president of Four Star when the company merged with PRG in 2001.

During his nearly 20-year tenure, he led PRG to its dominant position in the market for theatrical production services and helped the company introduce transformative innovations in technology. Jere Harris, Chairman and CEO, said, “Darren was a unique individual in that he was both a great thinker and a doer. He would spend countless hours thinking things through, then go and execute. Nothing motivated him more than being told ‘this can’t be done.’ He always did get it done.”

Additionally, DeVerna was a partner in Grove Entertainment, a production company dedicated to developing, producing, presenting and investing in new work for stage and screen. His producing credits were numerous and include Jagged Little Pill, Dear Evan Hansen, Escape to Margaritaville, The Prom, King Kong, The Band’s Visit, Les Liaisons Dangereuses, SpongeBob the Musical, and Tuck Everlasting. He was also involved with London productions of Rock of Ages and An American In Paris and was an investor in London’s Charing Cross Theatre, as well as several Broadway shows.

DeVerna trail-blazed a 40-year career that impacted an industry beyond measure. In a 2018 interview, he said, “To be successful, to make your mark, you have to become part of the community. Eat, sleep and breathe it.” That is surely what he did and, coupled with his deep and long held friendships, is why his loss is felt so broadly within the theatre industry.

Harris said, “Darren and I started working together at summer jobs over 40 years ago. Much later, we spoke everyday many times a day. He was an integral part of my daily life the last 20 years. Losing Darren is not fathomable to me right now.”

DeVerna donated his time to numerous groups including being a board member of the New York Musical Theatre Festival. He was a former Chairman of Mount Vernon Hospital, the former Vice-Chairman of Sound Shore Medical Center, and cofounder of the Laurie Beechman Memorial Golf Outing.

DeVerna is survived by his wife Karen, as well as his children Tara, Kyle and Bridget, PRG colleagues and a Broadway family who deeply respected and admired him.