Twenty years later, Metallica and the San Francisco Symphony were reunited for their legendary S&M concert, this time as the opening night programming for the Chase Center in San Francisco. Show Director Dan Braun designed the set, which included four flown LED rings that hovered above the symphony and the band in an in-the-round stage setup. 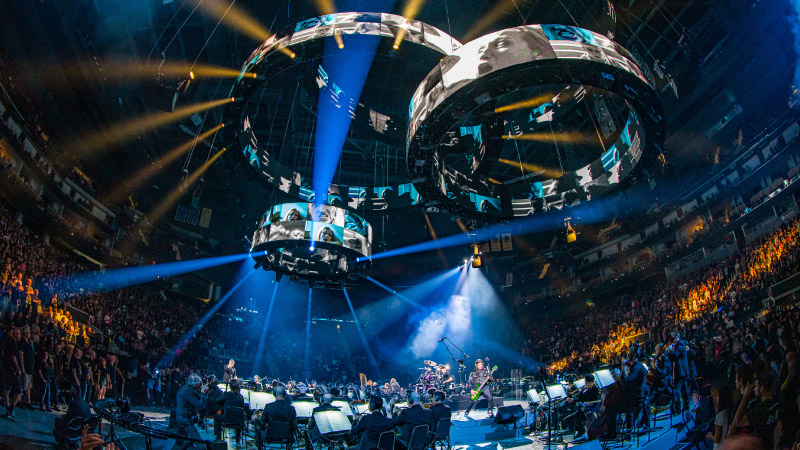 PRG provided LED, rigging, motors, sound and the camera system for this historical event. This included an LED system with a total pixel count of 16,418,688, a POV camera slider system, and 254 Meyer Sound speaker enclosures.

“Absolutely beautiful, cutting-edge design and vision by Dan Braun,” says PRG Senior Vice President John Wiseman. “When we saw the drawings, we realized we were looking at something we hadn’t seen before, which is really saying something considering the volume of shows our team has been lucky enough to be involved in over our careers.”

While the pairing of the band and the symphony had been done before, from a production standpoint this show was entirely different from the first S&M concert, which was held at the 3,500 capacity Berkeley Community Theater.

“This classically San Francisco band was a natural choice for the new venue,” explained Braun. “We used those parameters for the design.”

Metallica and Braun’s over-arching goal for the design was to facilitate the energy exchange between the band and audience as directly as possible. 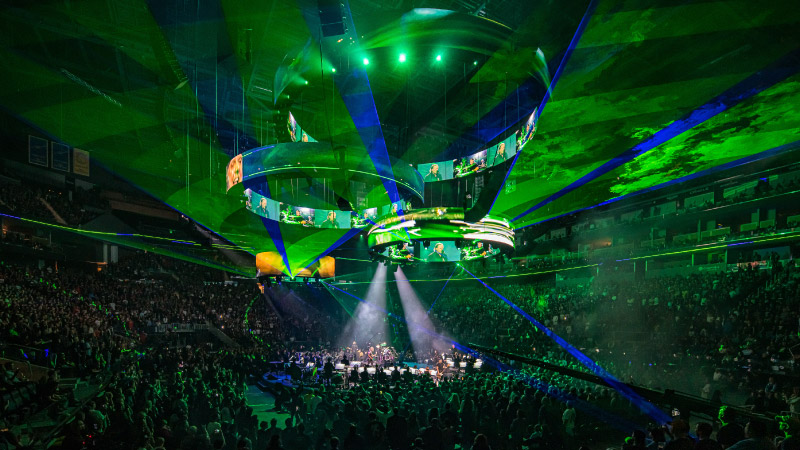 “The only way you can take the last row of the audience and move it halfway closer to the stage is to move the stage to the middle of the arena,” explains Braun. “I haven’t ever forgotten what it’s like to be a young person going to a concert, so I find the in-the-round design very attractive.”

Metallica and PRG have a long history working together, and when the drawings for this one-off came in, Director of PRG Projects Jeroen Hallaert realized it would be quite complicated. The four flown LED rings required that 60, 45, 30 and 16-foot circular truss be respectively stacked and clad with ROE CB5 tiles on both the inside and outside. Braun was committed to a very clean look, which meant that the LED would have to be custom designed with fabricated hanging hardware.

“When I drew the thing, I of course I thought it might be really special,” explains Braun. “In pre-vis, we had a dream team from PRG along with lighting director Rob Koenig and programmer Joe Cabrera. When I walked into the room where we had the rings set up for the first time with the stage and the video surfaces activated with test patterns, I beamed. That’s a breathtaking moment when you see it and realize it is going to work, and this time it was magical.”

The entire LED system was a full tile to tile redundancy in addition to processor redundancy. The bespoke hardware was designed for a very fast load in, as only 20 hours were available for everything including stage, sound, video and lighting. 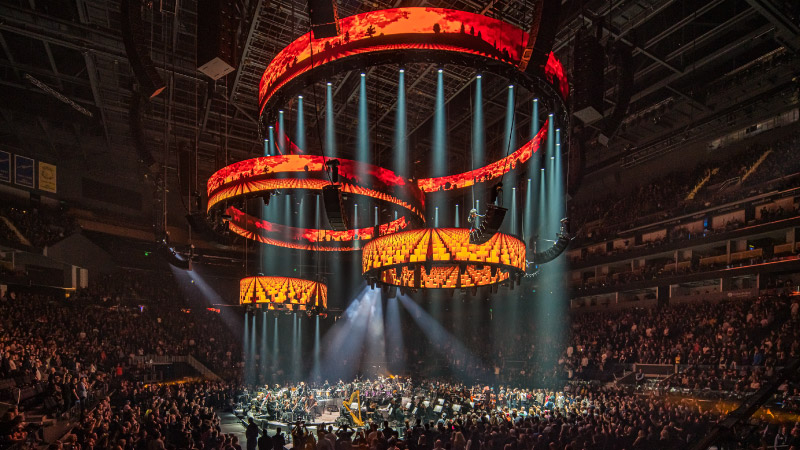 “The rings took us two days to assemble and hang during rehearsal, but our team came up with solutions to cut that time in half for the show load in,” explains PRG Project Manager Valdis Dauksts. These solutions included smart gear packs and keeping the entire crew consistent throughout rehearsals and the show.

In the end, it was all worth it as the show was a major success and received glowing reviews from publications and audiences on social media.

“What we heard and saw in the arena was exactly what we intended to do,” said Braun. “Lug managed to take 99% of the cabling from the ceiling. It created a magnificent environment. When you look at the photos, the cable drops were not photoshopped out, they were really not visible.”

Because Production Manager John “Lug” Zajonc has worked with Braun for years now, he says it was easy to understand his vision. 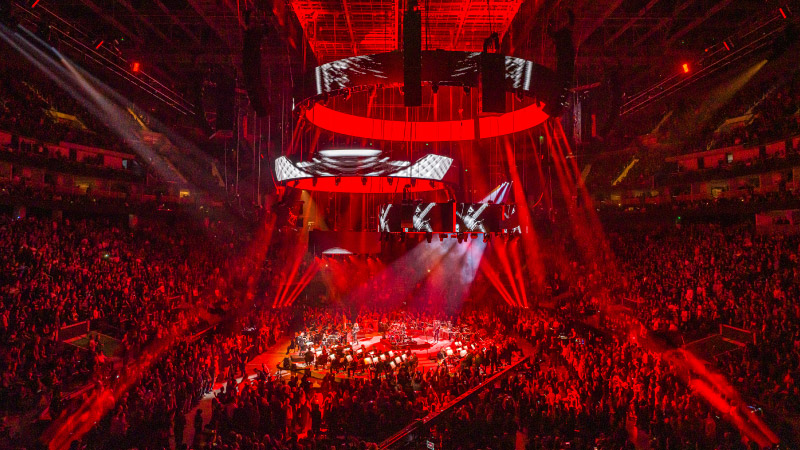 “I have always believed in the fit and finish as the fans deserve the best show we can provide, so immediately I thought that all the cables needed to be routed to the ceiling,” explains Zajonc. “We were able to work with the building to find additional power in the catwalks so we could achieve the clean look and were fortunate that they were able to accommodate all of our equipment.”

It might seem like a whole lot of work for a one-off show, but it is undoubtedly one that people will remember for years to come.

“Of course building this for a one-off was a steep hill to climb but with partners like Kish Rigging, the leadership of Lug and Dan, and our PRG team of Val Dauksts, Gene McAuliffe, Eric Geiger and Wolfgang Schram onboard, we had the expertise and all the tools to be successful,” says Wiseman.

Using PRG and VER for multiple disciplines had some notable benefits for production. 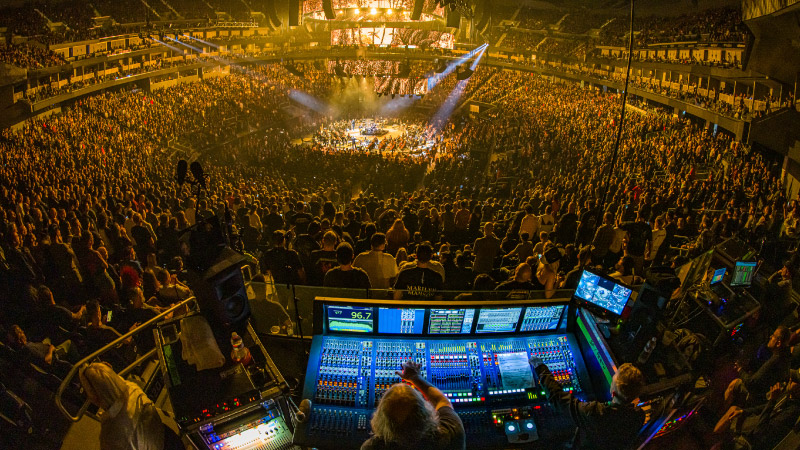 “Jeff Priepot did a great job getting our audio package sorted and John Wiseman came in on the video side to really help us out,” says Zajonc. “The motors being consistent throughout the entire project made it easier so we could plug in from anywhere to get things going.”

“Having a relationship with someone who can support you and do problem-solving is vital because doing a huge one-off like this is even harder than preparing for a tour in a lot of ways,” says Braun. “It takes an amazing group of people to look at a drawing and make it real and efficient. A partner like PRG who will embrace your values and pursue a common goal of a magnificent show is an amazing experience to be part of.”