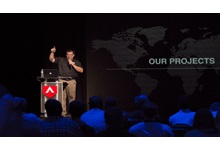 PRG, in conjunction with the local Producers Guild, the American Society of Cinematographers and the International Cinematographers Guild, held its first workshop in Atlanta — a growing television and film market. The purpose of the late-February workshop was to educate local and incoming talent on the latest technology innovations, products and services being used in productions around the globe.

Led by Cinematographer Shelly Johnson and Lighting Designer Jared Moore, over 100 attendees learned about intelligent lighting, LED immersive environments and more. Shelly demonstrated the benefits of PRG’s OverDrive solution, including shooting traditional location shots on a stage with LED backdrops featuring video of the location (anywhere–day or night) within a controlled environment. With the assistance of the PRG team, Shelly showed attendees how cinematographers collaborate and work through the technology while framing and composing within a monitor. Shelly’s presentation clearly demonstrated why filmmakers and actors alike get excited about the PRG OverDrive solution. Using this solution, enables both parties to walk away with confidence their shots are complete–executed hassle-free while saving significant production time and money. Shelly is best known for his work on Category 5, Captain America: The First Avenger, Jurassic Park III, The Wolfman and Hidalgo.

Jared addressed the advances in Intelligent Automated Lighting, showcasing how the technology used on FOX’s highly rated TV show Empire has increased the show’s production value. The presentation also highlighted the functionality, advantages and lighting effects achieved from a variety of PRG’s lighting solutions chosen as the technology of choice for not only the TV show Empire, but also for other features and television shows shot or produced in Atlanta. Jared is recognized for his work on Divergent, Empire and Mind Games.

PRG’s team reviewed the company’s newest technology designed for the television and film industry. Case studies were shared detailing how the latest solutions (OverDrive, HoloGauze and Intelligent Lighting) brought the visions of filmmakers to life.

Attendees were also engaged in an outdoor presentation introducing AirCover’s inflatable green screens known as Airwalls. AirWalls, an attractive alternative to traditional set construction for visual effects shoots for television and film, have already been used on recent shoots for Pirates of the Caribbean: Dead Men Tell No Tales, X-Men: Apocalypse, Captain America: Civil War, and Star Trek Beyond, to name a few.

Overall, the workshop was a wild success. Among those in attendance were Georgia Film Academy students who participated and filmed the event. PRG hopes to continue hosting workshops in Atlanta as well as other TV/Film industry-focused markets.