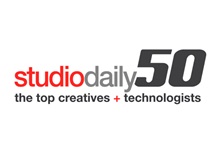 We are excited to announce that PRG’s own, Chris Conti, has been named to the 2017 StudioDaily50 for his work in advancing technological achievement in the entertainment industry.

The StudioDaily50 is an award that spotlights 50 “key creatives and technologists whose leadership and influence are breaking new ground in media and entertainment. The StudioDaily 50 is populated by executives and producers who make great work happen; directors, cinematographers and editors who push the creative envelope; and scientists, engineers, inventors and other innovators who keep pushing the state of the creative arts.”


Chris Conti, representing PRG Dallas and his team, has been recognized for his leadership in the development of the patented PRG GroundControl Followspot System.  Among the four categories of award recipients, Chris has been named as a Technologist, and joins a list of accomplished industry professionals from companies such as Marvel Studios and Paramount Pictures.  “Being recognized by StudioDaily is a great honor,” said Chris, “and I am truly thrilled to be representing the whole PRG Dallas Team that developed the cutting-edge technology that went into GroundControl and its success.”

Congratulations to Chris and his team on this achievement!