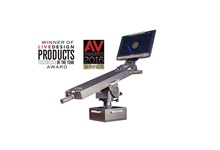 DALLAS – MARCH 16, 2017 – Production Resource Group LLC, the world’s leading provider of entertainment and event technology solutions, announced today that it has been issued a United States utility patent for the award-winning GroundControl™ Followspot System. The patent (number 9,593,830) is the culmination of a multiple-year development effort by the PRG Research and Development team based in Dallas. This patent is the first issued of the four patents filed by PRG related to the GroundControl system.

“We are very happy and proud to have our first claims granted on the GroundControl Followspot. PRG’s innovation is driven by our clients’ needs and this is just another example of our extensive technical capabilities,” said Chris Conti, product manager for PRG and one of the inventors. “This product is revolutionizing a category that has seen very little innovation in the past 30 years. We have been overwhelmed with the success and demand for the product.”

The GroundControl Followspot System, introduced to the market in 2016, has been well received by the industry – awarded Live Design’s Products of the Year for Best New Followspot in 2015-2016 and AV Awards Production Product of the Year in 2016 – and it has been quickly integrated into live music, TV and corporate productions. The technology has been used on tours by artists including Bon Jovi, Bruce Springsteen, Drake, Elton John, Metallica and Red Hot Chili Peppers and has been integrated into TV productions such as “The Voice”, “MTV Awards” and “iHeart Music Awards”. It has also been used in the Tom Ford Fashion Show and in events and exhibits by corporations such as Adobe, Microsoft and SAP.