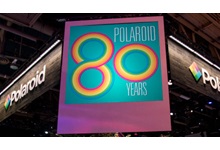 For the past six years, PRG has partnered with Polaroid’s team to design and develop the CES show site experience to attract and engage thousands in a meaningful way. As attendees move in and around Polaroid’s 110’ X 80’ exhibit space, PRG has been able to artfully integrate sound, light, video projection and movement to showcase a wide array of products, create discreet engagement experiences; and; establish a reasonably quiet zone for a suite of private meeting rooms.
Moreover, PRG has been able to leverage these solutions to deliver award-winning experiences while using an existing exhibit structure. This approach has saved Polaroid a tremendous amount of time and money. 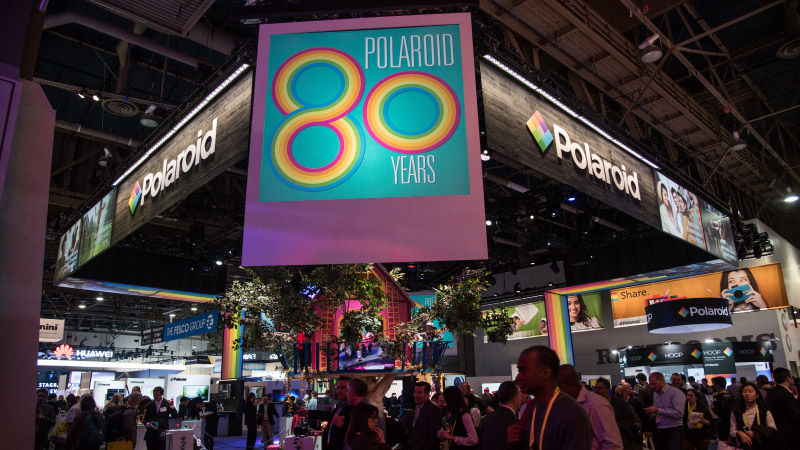 Six months prior to CES, PRG met with Polaroid to discuss the vision for the launch of the anniversary celebration. To enable the client to visualize the proposed solution, PRG rendered the space along with proposed lighting and movement in 3D.  This is referred to as the pre-visualization phase, allowing clients (like Polaroid) to actually review the lighting and movement in situ, simulating the actual experience to be delivered at show site.
Following the pre-visualization phase, PRG staged the exhibit and proposed technology solutions for final approval and to eliminate any surprises at show site. The staging experience, like a dress rehearsal, ensures a successful outcome and typically creates tremendous labor efficiencies–especially for an exhibit of this size and complexity. 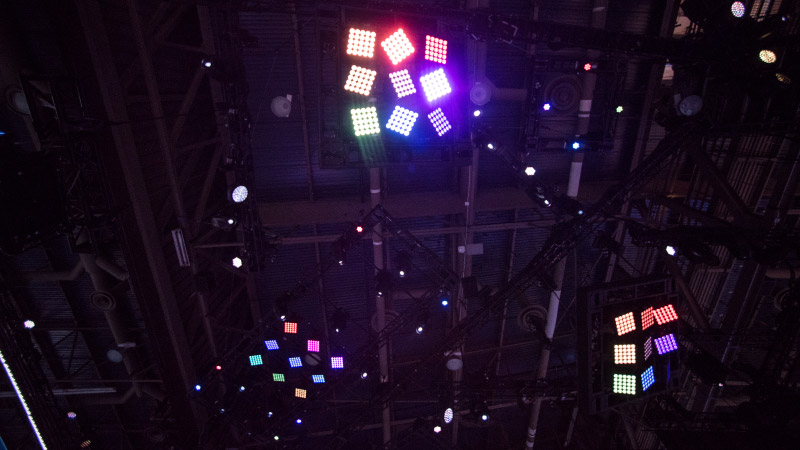 Magic Panels
As part of the 80th design, PRG incorporated its Magic Panels to create living Polaroid Cubes, a modern lighting showcase of their classic logo. While these Magic Panels are typically seen in concert touring, PRG brought them in for CES, stretching experiential lighting solutions across market segments. (great advantage!) 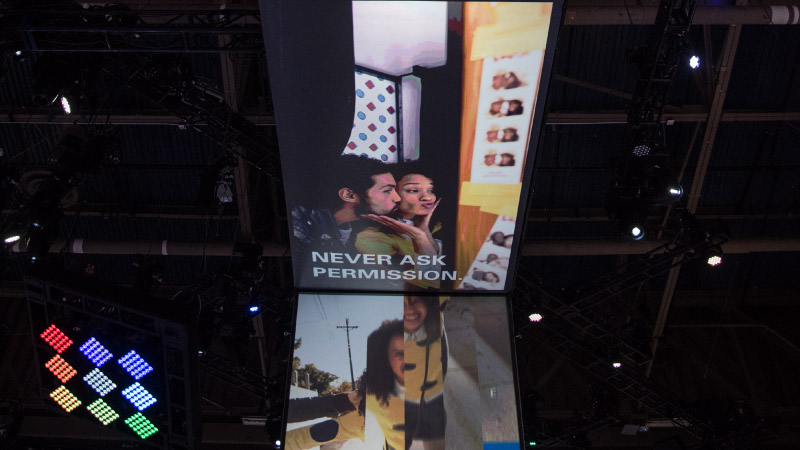 The team at PRG understands motion and light are two things the human eye quickly detects. Leveraging that knowledge, content ribbons displaying brand colors, strong imagery and campaign headlines were weaved overhead, as well as vertically and horizontally throughout the booth design creating a more immersive experience, constantly changing to maintain interest. Twelve state-of-the-art projectors, hung in unconventional orientations on overhead rigging and truss, distributing imagery without worry of the projection being blocked. The key to executing a projection design of this magnitude is ample preplanning and engineering, an important aspect of PRG and Polaroid’s partnership success. 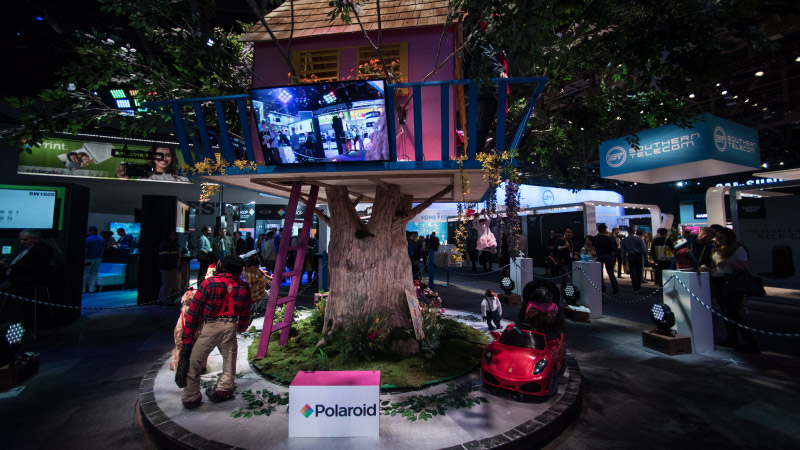 One of the exhibit highlights was the Monkey Tree, an ideation formed to promote one of Polaroid’s newest products, the Monkey Mount. The custom-built treehouse featured an array of monitors with content pushed over the booth’s wireless network. Managing sustained connectivity and bandwidth wirelessly is a considerable challenge for a show with over 100,000 attendees and hundreds of exhibitors. For context, during show hours CES uses the same amount of Wi-Fi as a midsize city. To ensure sustained coverage for this attraction, PRG took over the exhibit’s networking function, setting up Wi-Fi hotspots supported by Wi-Fi mesh technology. 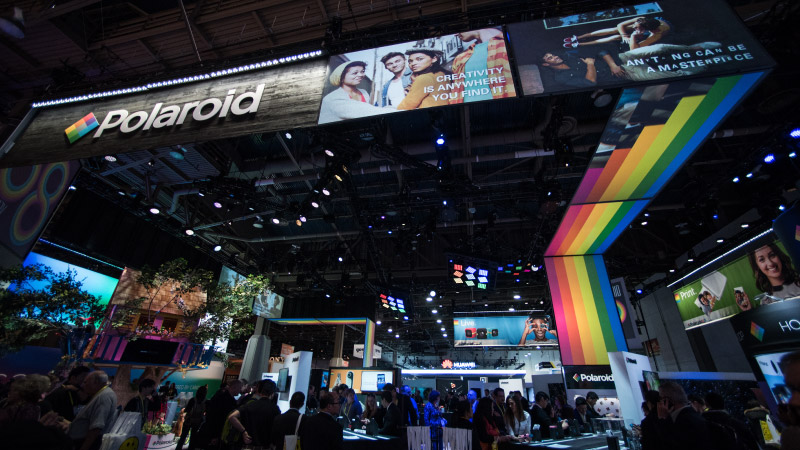 Audio control is always a challenge on any tradeshow floor, even more so at CES. With meeting rooms, activity areas, the product stage, the Monkey Tree and evening press conferences, audio zoning within the exhibit was imperative. The overall sound system was designed with five dedicated zones within the exhibit, each with individual switches to manage audio levels based on the ebb and flow of the traffic and ambient noise in the hall. Because the audio was controlled independently, the entire booth could push an isolated audio message or the system could manage a complete audio takeover. 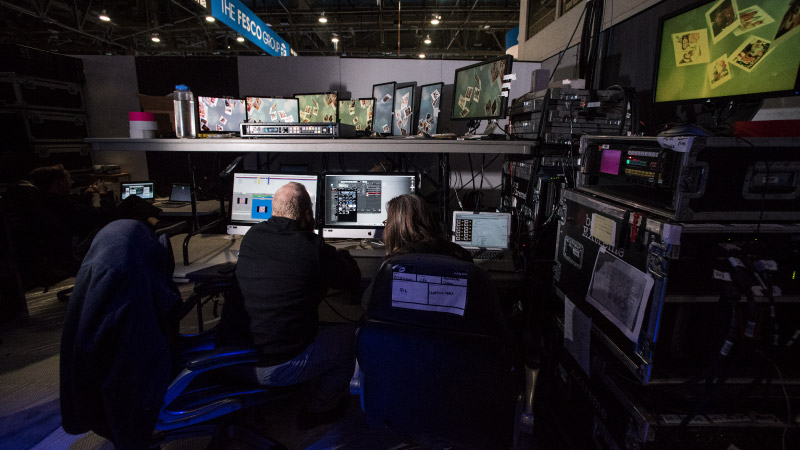 Because the Polaroid experience is and was so heavily dependent on audio and video projection, PRG managed all onsite labor–directing teams and tracking of all labor services at show site, saving Polaroid thousands of dollars. This is one more way the PRG Team added value to the relationship. 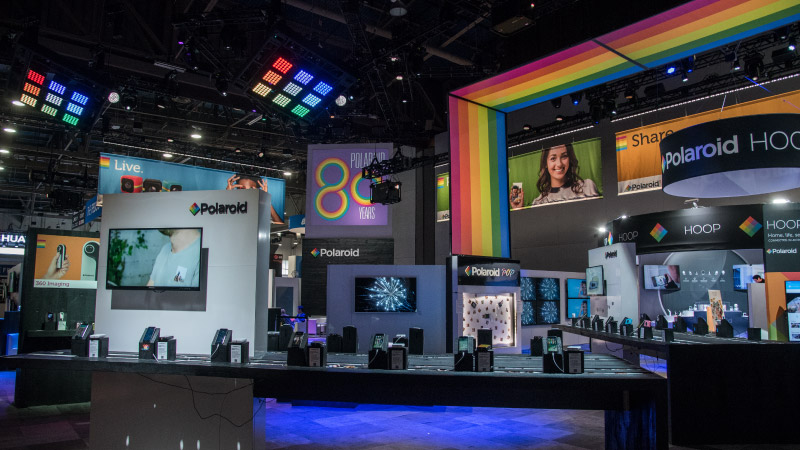 Overall, CES 2017 was another sweeping success for Polaroid and PRG, and we look forward to continuing this partnership moving forward.