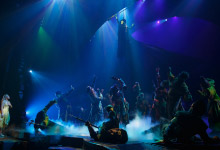 “PRG Scenic Technologies changed Broadway productions with the Stage Command® motion control system first used on “Phantom of the Opera” in 1988. Since then it has become the leading provider of rigging and automation, fabrication and technical and engineering services,” said Fred Gallo, President of PRG Scenic Technologies. “We are proud of our heritage in theater and our technological leadership.”

PRG Scenic Technologies’ master craftsmen and technical designers bring designers’ vision to life while pushing creative possibilities. PRG’s innovation and its ability to make the impossible a reality is demonstrated in current productions including “Frozen,” “King Kong” and “Wicked.”

For “Frozen,” PRG Scenic Technologies was the lead scenic shop and provided all the automation including some of the special effects. PRG created 136 effects including two giant, sub-deck turntables from which ice spikes rise; for Olaf’s trip to the beach, it developed special equipment that rises out of the floor and unfolds like a pop-up book. Specially designed scenery also includes a rope bridge covered in ice on which Anna and Kristoff have a dramatic scene.

PRG brought its full expertise in scenic automation to bear for “King Kong.” In addition to providing structural modification to the theatre so it could accept the load of the gantry that moves King Kong, PRG built the boat lift that rises out of the stage floor and created the performer fly effects – large vines that descend from 30 feet above the stage floor for performers to climb – and an LED drum wall, the largest on Broadway.

For “Wicked,” PRG was the automation supplier and created the famous levitation effect for Elphaba utilizing a custom designed, telescoping hydraulic actuation system and a performer securing device. Elphaba is instantly secured onto the levitator and is raised 20 feet above the stage while simultaneously moving downstage 12 feet. Her ascension appears seamless and integrates with the action. PRG has also supported subsequent productions throughout the world including Korea, Japan, UK and European tour.