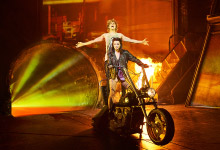 When Bat Out of Hell-The Musical Co-Producer Michael Cohl stood on a make-shift stage outside the London Coliseum at the press launch of Bat Out of Hell-The Musical in November, he declared his latest project, along with fellow Producers David Sonenberg, Randy Lennox and Tony Smith, and Production Manager, Simon Marlow, to be the biggest rock musical to premiere in London since We Will Rock You. He wasn’t wrong, positive reviews are plenty, with The Times calling Bat Out of Hell: ‘a crazy, wild child of a rock ‘n’ roll musical’, The Guardian declared the: ‘roaring choruses and fairy-tale plot are built for the ENO’s stage’. The Stage said: ‘Bonkers it may be but, hell, it’s pretty brilliant too’, adding: ‘although set in the future, in many ways it feels old-fashioned, like a huge, 1980s arena gig, intensified by Patrick Woodroffe’s blazing lighting.’

With Jim Steinman’s Iconic soundtrack, made famous by Meat Loaf, one of the most ambitious set designs to ever grace the stage of a theatre by Jon Bausor, an innovative use of video by Finn Ross, and an up-scaled, operatic lighting design by Patrick Woodroffe—Bat Out of Hell-The Musical has made a big impact on the UK musical theatre scene, which it will attempt to emulate when the show transfers to Toronto in October. 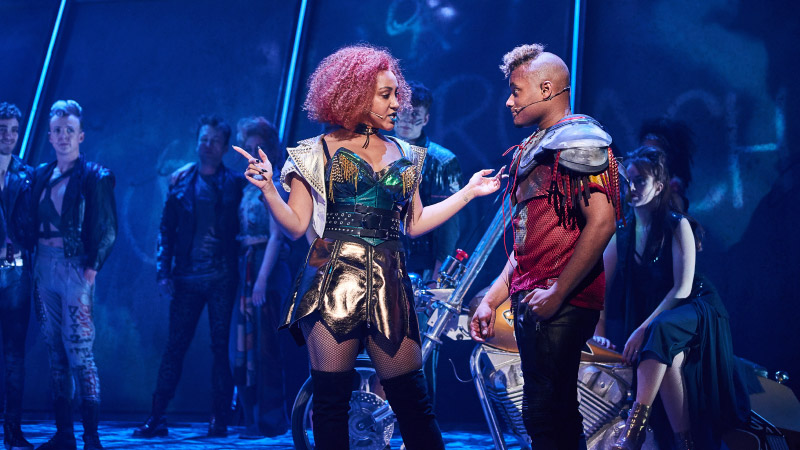 Set against amidst the ruins of a post-cataclysmic city, Bat Out of Hell-The Musical is a romantic adventure about rebellious youth and passionate love. Jay Scheib directs this stampeding musical, which sees wild-eyes Strat, leader of street gang, The Lost, fall for Raven, the daughter of the dictatorial leader of dystopian city, Obsidian amidst the bombastic soundtrack, featuring classics such as: I’d Do Anything For Love (But I Won’t Do That), You Took the Words Right Out Of My Mouth, Two Out of Three Ain’t Bad; and, of course, Bat Out of Hell.

Peter Marshall, Director of Theatre for PRG XL, oversaw the provision of kit to Bat Out of Hell: The show initially opened for a twelve-week run in Manchester at the start of the year, before transferring to the coliseum for the summer season from June to August. It was brilliant to continue our relationship with Producer Michael Cohl and General Manager Julian Stoneman again—after supporting them on Rock of Ages, and very exciting to work with Patrick and Finn, providing some of the latest technology on the market, including the Panasonic PT-RZ31K laser projectors. Bat Out of Hell was one of the first installs of these fabulous projectors in the world, which came straight from the Panasonic factory in Japan to the Opera House in Manchester.” 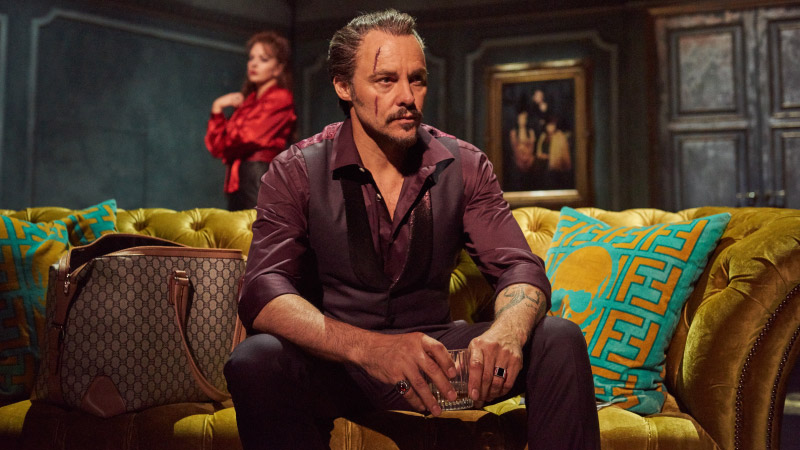 Associate Lighting Designer, Rob Casey worked alongside Patrick Woodroffe: “The overarching theme of the lighting for Bat Out of Hell is to achieve big, operatic backlighting which compliments Jon Bausor’s rugged set. We took a basic set of ideas from Patrick and theatricalized it using numerous positions overhead and around the set. The trusses are trimmed to around thirty nine feet, well out of view and capable of giving a steep-angled backlight, which Patrick is a really big fan of.”

Lighting Programmer Chris Hirst added: “The main workhorse lights we’re using are the Martin Mac Viper Performance moving lights, as well as GLP X4 and X4L LED lights, which we use to achieve a lot of the looks seen on stage. Additionally, we have Martin Atomic and HES Dataflash strobes, a variety of different sized Colorblaze LED battens, Icon Beams, Colorblast CB6 LED lights, and a substantial package of generic lighting fixtures in the rig. All the lighting cues are pre-programmed on a GrandMA2 console to timecode, which allows all the big, strobe looks, yet can still be cued through by a DSM.”

Bat Out of Hell-The Musical makes innovative use of the latest projection technology from Panasonic to add to the overall look of the set and lighting design. Peter Marshall explained: “When we specified the equipment needed for the show, it was clear that only the highest performance projectors would suffice. We opted for the Panasonic PT-RZ31K laser projectors to take on the bulk of the projection work. Being a laser light source, these units are incredibly efficient with a maximum lifespan of around 80,000 hours, suffering minimal light output drop off over the life of the lamp.” 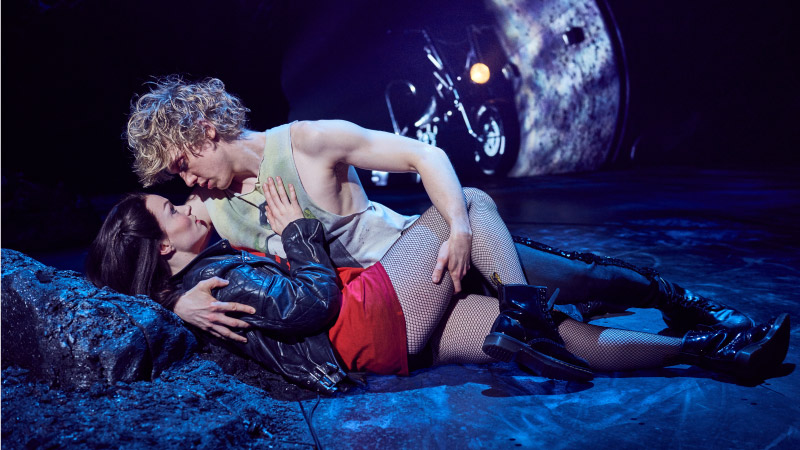 Emily Malone, Video Programmer on Bat Out of Hell added: “The Panasonic laser projectors are brilliant, they’re very bright but also very quiet for a projector of that size, which means they are perfect for theatre. We’re running all the content through a d3 media server, triggered by a GrandMA2 console. The d3 is an incredibly versatile media server which gives us the ability to integrate content across three dimensions, and tie in to Notch, which we feed live camera footage through to apply real-time effects. The combination of using d3, Notch and a GrandMA2 console gives us the maximum amount of flexibility and allows the show to be run by one person, on one console—activating both lighting and video cues.”

Video Designer, Finn Ross, of FRAY Studio design, commented: “The video design for Bat Out of Hell summons the ruined world of Obsidian, the neo-futuristic city in which the show is set. The set is fully video mapped and constantly textured by video to shift us from location to location, in an abstract style inspired by the ruined Bronx of the 1970s. We also use a lot of live camera to present certain aspects of the show as if happening in a dream. We process the camera through Notch to give the image a heightened, dream-like atmosphere. Everything is sequenced in d3, making it very easy for us to rework whole segments of the show in visualization.” Working alongside Finn and Emily was Video System Engineer, Jonathan Lyle and Video Engineer, James Craxton, who designed and implemented the system to realize Finn’s artistic vision.

General Manager Julian Stoneman commented: “Once again it was a pleasure to be working with PRG on such an epic production as Bat Out Of Hell The Musical. The expectation from an audience pointof-view was going to be huge and with the designers that were employed, it meant that the finished product was going to be a class of its own. The designers along with PRG worked as a family, so the time and effort that was put in was never wasted."

Rob Casey described the challenges of adapting the set-up when moving between the two venues: “Moving from Manchester to London was a really big change, the Coliseum is considerably bigger than the Manchester Opera House, so some adjustments were always going to have to be made. That said, we had both venues in mind when designing the show, so very little of the lighting rig changed, with the exception of reconfiguring the way some of it was rigged overhead. When we were in the Opera House, the additional width of the proscenium arch in the Coliseum was marked on the wall, so we knew what would and wouldn’t be visible when we arrived in London. The transition between the venues was very smooth, because the core team was kept the same for both theatres. Production Electrician Rich Mence lead a team of seven production electricians to bring this mammoth production to the stage.” 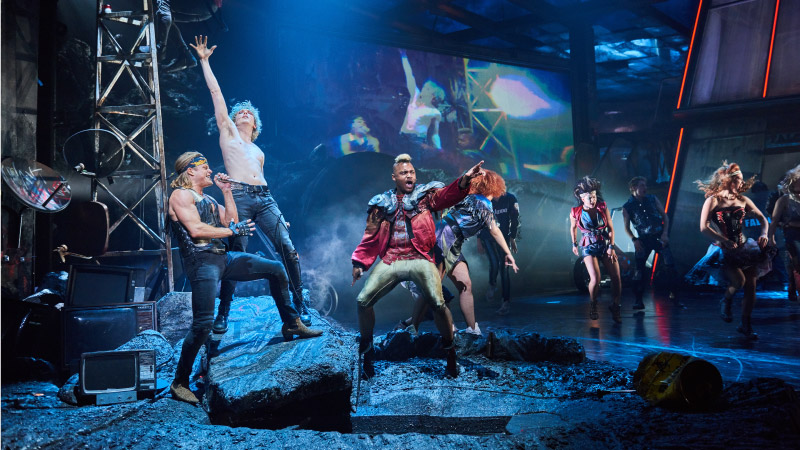 Rich discussed: “I was really excited about working on Bat Out of Hell, I remember listening to my dad’s copy when I was really little, so to be given the opportunity to see it brought to life on stage was an exciting prospect. It’s not like a regular musical theatre show, being so loud and rocky. The load-in schedule for London was fairly quick compared to Manchester, where we had an additional couple of weeks to build everything and technically rehearse it, with the show still being tweaked during preview shows. Because we already knew how the show would run, we spent most of the time before previews adjusting the position of the lights to accommodate the Coliseum stage, which is much bigger than the one in the Manchester Opera House. I’s been a pleasure working with the whole team on Bat Out of Hell; everyone has played a vital role in making the show what it is.”

Rich continued: “The most challenging part of prepping for the show, was that we always had to have in mind that the production was going to move between two different theatres. Usually a show of this size would go into a venue and sit down for a prolonged period of time. We treated Bat Out of Hell like a tour in terms of infrastructure needed, the show tours all its own cable, distro and control networks, which isn’t always the case with a big West End show. Every element of the rig—electrics, smoke effects and pyro, needed to work in both theatres, and be practical to move. Building the rig in the modular way that we did, enabled us to move the whole lot between two cities with only minor alterations needed. Soon, the show moves to Toronto, so we will need to go through the process again, and then probably again after that when the journey continues.”

Peter Marshall concluded: “It may sound like a cliché to say that it was delightful to be involved with the show, but everything about Bat Out of Hell has been brilliant and a real privilege to be part of it. The music, design, people and experience have been amazing. The out of the box creativity shown by all the creatives involved have allowed us to showcase exactly what we can do combining lighting and video in the theatre. We wish everyone involved in Bat Out of Hell all the best for the remainder of their time in London, for the transfer to Toronto and beyond.”

Bat Out of Hell The Musical will play at Toronto’s Ed Mirvish Theatre from October 14th to December 3rd 2017.