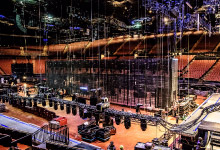 PRG’s innovations are industry-changing and the recently debuted PRG Ingest system – which captures concert footage in real time – is revolutionizing the concert touring industry. PRG Ingest is a scalable, live ingest system for video and audio signals, allowing the recording of a concert in less time and with less man power.

With the PRG Ingest, the capture is done simultaneously. With a minimum of four channels – or camera feeds – and up to as many as you want, you can ingest live, transcode and push the converted signal via a 10GigE network to an external hard drive. Each server can handle either 1x 4K at 60P as quad link square division, 2SI or four separate 3G single link channels. Audios embedding and Matrix routing for SDI signals is part of the package, time code distribution comes with the system. Further. the PRG Ingest system can transcode to all common codecs in film and television.

PRG Ingest was used on Beyoncé and Jay-Z’s “On the Run II” Tour. In order to handle the 6.2 TB of data that “On the Run II” Tour generated per night, PRG used six media servers which made copies of what is recorded, transcoded it to a pro res 422 file and pushed it over a 10GigE network on an external NAS drive.
“With the Ingest system, we can create a show record on an external drive of all channels in nearly real-time and still have a back-up copy on the server should anything go wrong,” said Wolfgang Schram, Director of Video Engineering, PRG. “The servers also get time coded, so all recordings have real time and can be used in an edit right away.”

PRG Ingest was on the road with U2 for the “eXPERIENCE + iNNOCENCE” tour. U2’s head Video Engineer, Jim Toten stated, “PRG’s Ingest is extremely accurate and high quality with full resolution and frame rate. PRG are innovators when it comes to technology, video, LED, anything to do with concerts.”
“Part of what we do at PRG is making the impossible, possible,” said Schram.


Back to top
X
Please Select: