The sold-out shows, in support of Smith’s ‘In The Lonely Hour’ album, visited venues across the US and Canada during January and February 2015 including The Forum in Los Angeles, and Madison Square Garden in New York.

Will Potts’ show design called for a subtle, classy video setup with Sam Smith’s band all situated on varying height risers at the rear of the stage. These risers were custom-built for the tour to house XL Video’s ROE MC-18T Hybrid LED, mounted into XL’s own touring frames.

Will was able to achieve the specific heights and widths he required for the stepped look of the design by XL Video disassembling the standard ROE tiles and repackaging them in a more flexible form factor.

The band risers, in pairs of 2 feet, 4, feet and 6 feet high, in a wide arc around Sam’s center position, were clad with a diffusing surface which resulted in subtle, pulsing color washes across the LED; the content for which was supplied via one of XL’s Catalyst media servers.

The two 14’ x 20’ portrait side IMAG screens, which were used for the larger venues on the tour, were built from XL’s popular Pixled F-12 LED.

XL Video also supplied a multi-channel camera system for the tour, with footage for the IMAG screens directed by Jon Shrimpton. To suit the classic style of the show, Shrimpton wanted to create something quite cinematic and used a combination of three Folsom Image Pro 2s to grade the contrast, gamma, color balance and to add a film flicker effect to the camera outputs. The three Image Pro 2s were each preset for black & white, sepia, and dynamic color.

The camera package consisted of two Sony HXC-100 cameras with 86x lenses at 45 degrees to center stage, situated in the audience, and giving more cinematic angles than traditional “pit” cameras, with a third at front of house. Additionally, three Sony robocams were situated on stage to pick up the band members. For the mix, Shrimpton used one of XL’s Blackmagic 2 M/E ATEM switchers.

The resulting mix was slower paced that many live shows, but as Shrimpton comments: “There are times when I only had one camera live for a whole song, but I wanted to make sure the mix wasn’t too complicated, so the folks at the back of the arena could really connect with Sam pouring his heart out.”

In addition to Shrimpton, XL’s crew for the tour consisted of Crew Chief Ted Cognata, plus Tim Bolland and Eric Escujuri who all doubled as LED technicians and camera operators. Charles Signiago was the Catalyst operator for the tour and the PPU was engineered by Michael Connell.

Gareth Jeanne, Touring Projects Director for XL Video in the US comments: “We were delighted to work with Will Potts and Production Manager, Cyril Thomas to realize the video design for Sam Smith’s first major US tour. Will’s very classic design allowed us to utilize our LED in a different way, and our team in China were really key in getting the risers constructed. Jon’s flawless direction, ensured the camera mix fitted perfectly with the whole style of the show design.” 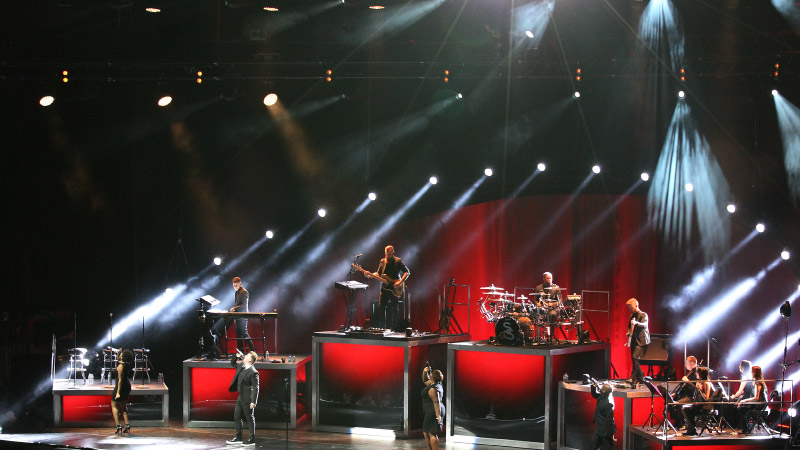