The free outdoor event drew in crowds of approximately 19,500 people and combined the music of John Adams’ choral work Harmonium, made especially by the Royal Scottish National Orchestra and Edinburgh Festival Chorus conducted by Peter Oundjian, with visually stunning projection mapping onto the Usher Hall in central Edinburgh. 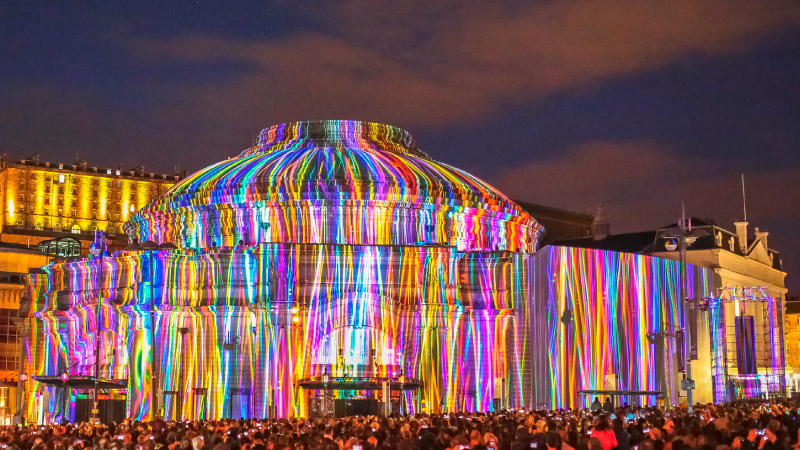 The 34-minute performance of The Harmonium Project integrated scientific data captured with the support of the Centre of Design and Informatics at the University of Edinburgh, who collaborated on the project to examine the effects singing has on both the performer and the listener.

Having worked with them successfully on Sinatra: The Man & His Music in the West End, and wonder.land at the Manchester International Festival, 59 Productions sought out XL Video to realize their video design for The Harmonium Project.

To cover the intricate columned façade of the Hall, XL Video employed fourteen of their Panasonic PT-DZ21KE projectors, with content fed by five of XL’s d3 Technologies' d3 media servers.

The show control, including triggers to the d3 servers, was all handled via an MA Lighting grandMA2 Light desk and NPU, with back-up from a MA Command Wing.

A team of animators from 59 Productions, under the direction of Nicol Scott, created the content for the show, which was designed to perfectly fit the building.

XL Video’s Ed Cooper commented: “It was lovely to work with Leo, Richard and their team so soon after Sinatra: The Man & His Music. 59 Productions’ technical briefs are always very exacting, and provided our team with a range of challenges which they ably met. The show looked fantastic, and the crowd were delighted by the spectacle!”