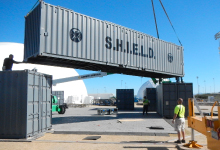 Los Angeles, CA – Hero Ventures, a Los Angeles-based entertainment company, announced today that technical elements for The Marvel Experience, an epic-scale, immersive adventure experience in which guests step into and interact with the world of Marvel’s Super Heroes and Super Villains, are being led by Production Resource Group (PRG).

“The Marvel Experience has evolved into an amazing, premier touring experience, complete with unique technical elements such as 3D 360˚ video projection, first-person ‘live’ interactive gaming and a dynamic 4D motion ride. It became apparent early on that we needed an elite team of seasoned professionals in entertainment production that could offer us real solutions to help execute our complex vision – that’s why we went to PRG,” said Hero Ventures’ Chief Production Officer, Jason Rosen.

The team assembled by Jim Lehner, PRG Senior Vice President, Special Projects, and Duke Durfee, PRG Creative Director and Design Manager, will be handling all the coordination and supervision of the design and construction for the project. While The Marvel Experience’s technical requirements pose a unique set of challenges, PRG’s global reputation has been built on its ability to bring innovative solutions to a wide range of projects including Broadway’s groundbreaking Spider-Man: Turn Off the Dark, Olympic Opening & Closing ceremonies, key elements of Universal Studios’ Harry Potter attraction, Super Bowl Halftime Shows and an exhaustive list of global concert tours.

“Traditional entertainment design is evolving,” explains Jeremiah J. Harris, Executive Producer of The Marvel Experience and the Chairman and Chief Executive of PRG. “Technology, guest interaction, and immersive storytelling need to be balanced seamlessly together to realize the next generation of experience-based entertainment. For Marvel Entertainment and Hero Ventures, that means taking the world of Marvel directly to fans, on a scale never before toured, and letting them enter that world fully. This is the future of entertainment; the guest doesn’t have to travel to an attraction in a fixed location, the attraction is brought to them. Of course, that takes a considerable amount of logistical planning, innovative problem solving, and meticulous coordination.”

That same proficiency is evident in the complex control network the PRG team has designed to integrate all of the technical aspects of the production. In this case, bringing everything together “under the Dome,”The Marvel Experience is a touring complex that covers over 140,000 square feet and features seven interlocked, air-inflated Domes, with the largest towering over six stories high. Developing these new custom made Domes was a unique engineering feat in its own right. As much like a concert tour, they had to be designed to travel from city to city, being built and deconstructed in a matter of hours. As guests enter the Domes they instantly become an integral part of the story. While on their quest, guests will experience hands-on interactive games and a variety of show systems from 3D, 360-degree stereo projection to atmospheric lighting and audio, animatronics, virtual and augmented reality, and projection mapping—all while being interconnected to the experience via RFID in the form of a technologically advanced “tracking” Super Power Band. The crowning jewel of the experience is the final battle featuring the largest touring, motion-based attraction in the world where guests are able to participate in the outcome of the mission.

“Tracking animation, the movement of the seats, the movement of the lights, the audio levels, and combining everything else into one cohesive experience is a challenge uniquely suited to PRG,” says Lehner. “We worked closely with the animation group and scenic fabricators to make sure that what you see and hear throughout blends with both the on-screen and physical elements that you are sitting in and walking through—and blurs the lines between fantasy and reality into what Hero Ventures is calling Hyper-Reality. Every cutting-edge, high-tech feature was designed and installed to make The Marvel Experience one that visitors will never forget.” “Creating a themed-entertainment attraction that will redefine the ‘state-of-the-art’ requires a team of talented set designers and technical engineers to envision, produce, and execute,” notes Durfee. “For example, Electrosonic provided groundbreaking audio and video design solutions that enabled the interactive exhibits, live gaming and virtual experiences to become a seamless immersive environment. It is this type of innovation that differentiates The Marvel Experience from the typical traditional touring shows.”

The culmination of the experience is an epic interactive finale in which Hero Ventures collaborated with MediaMation, the leading manufacturer of 4D/5D motion theaters, to develop a traveling, 4D motion ride. “Designing a 4D motion ride for a theater-quality ‘Dome’ experience presented exciting new challenges for our engineers and technicians,” according to Dan Jamele, VP and Chief Technical Officer of MediaMation Inc. “The unique requirements of this large scale, portable MMX®4D attraction included custom seat “tilt” angles, ensuring that the entire audience stayed fully immersed in the action regardless of where they are sitting. Executing 4D effects such as wind and water spray also required new and innovative solutions in this unique environment. Working alongside Hero Ventures and PRG on a project of this stature is really a unique opportunity that MediaMation is proud to be a part of.”

The Marvel Experience lands in Phoenix on December 19th and runs through January 3rd before moving on to Dallas, San Diego and San Francisco with more cities to be announced shortly. Tickets are available both at Ticketmaster.com and at themarvelexperiencetour.com/tickets.

ABOUT MARVEL Marvel Entertainment, LLC, a wholly-owned subsidiary of The Walt Disney Company, is one of the world’s most prominent character-based entertainment companies, built on a proven library of more than 8,000 characters featured in a variety of media over seventy years. Marvel utilizes its character franchises in entertainment, licensing and publishing. For more information visit © 2014 MARVEL