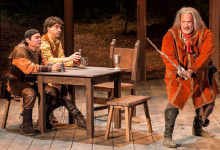 “The most important factor that contributes to successful transition to civilian life is a Veteran’s ability to secure a good job.” Ben Donenberg, Founder & Artistic Director – The Shakespeare Center of Los Angeles

The crew, however, was comprised of a group of veterans participating in Veterans in Art, a Shakespeare Center program which helps veterans learn new skills. From load in, through the run of the show and load out, the veterans learned about the inner-workings of a production and can take that knowledge and skills into their job search. As to be expected for a Shakespeare production (presented in The Japanese Garden at the West Los Angeles VA Campus), the staging and lighting was exceptional. PRG donated gear for the production, as it has done for the last seven years. This year, PRG provided them with the largest rig to date; including a complete rig for the production as well as lighting for the garden.