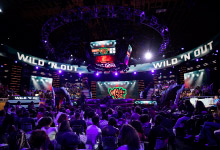 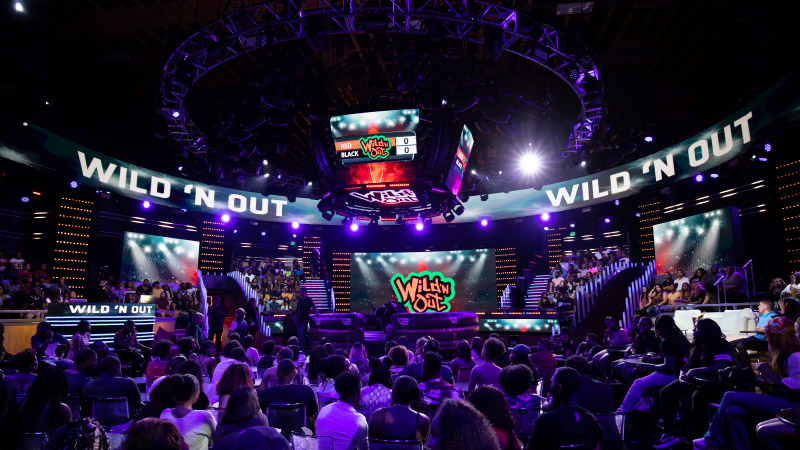 Screens Producer Eli McKinney was brought on the Wild ‘n Out team the first year they decided to upgrade to a bigger video set.

“I brought in the PRG Mbox®, at that time it was the 3.5 machines, and PRG consoles for control. It was a completely new workflow for them. Being able to have unlimited resources where you could just change the graphics and be in a completely different location or environment was amazing for the gaming and comedy elements,” McKinney explains. “We worked with the executives to really set the look for them.” 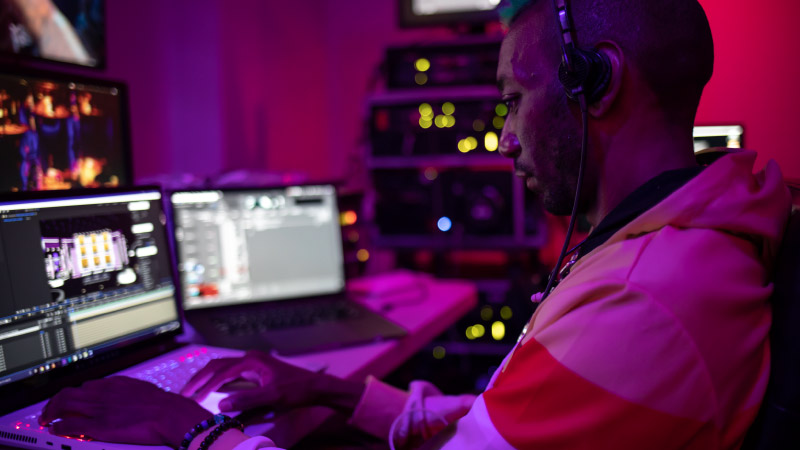 Three seasons ago, the executive producers requested to put a video behind the entryway with the contestants. McKinney came to PRG Account Executive Lauren Paul and told her that he’d love to see something bright that would still allow them the ability to do the video.

“Lauren suggested hybrid walls, brought them in and everyone loved them. We still have them in today. It’s a really cool collaborative client-vendor-client relationship working together to create new stuff.” 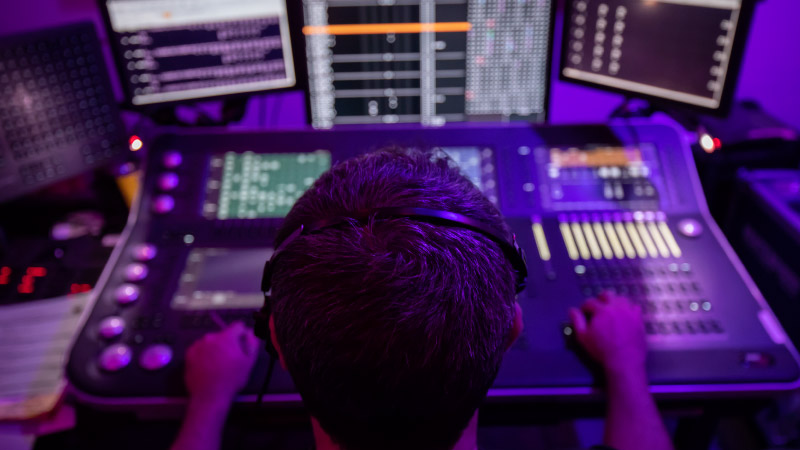 The benefits of the Mbox workflow is something McKinney returns to in conversation.

“I could have an animator in Germany working on something, render it directly to the Mbox, and have an image up for approval in minutes,” he explains. “This is a beautiful part of the Mbox workflow: it gives us flexibility so we are never in a place where we feel we cannot do anything due to technological limitations. Six or seven years we switched over and have not looked back.”

The screens are a vital part of the set, as they are used for game clues, music performances, and creating environments.

“The screens have almost become a part of the cast! PRG was able to offer cool options with the new Mbox with more layers and more responsiveness. This has worked out great because Nick Cannon and the executive producers are really forward-thinking, open-minded people. When we pitch things to them, they are open to it. And when they pitch us ideas, 99% of the time we are able to do it because of the technology. It’s been a really cool progression with them.”

“It’s been really great having PRG in the back pocket when we want to try new things. Last year, we did the video floor which was something John Gilles studios was very interested in. Lauren jumped in and showed us different product options and it became a reality. It looked great and added a lot to the show. Having a vendor who is willing to be part of the collaboration and conversation and is able to suggest ideas and technology allowed us to see a potential we would not have otherwise known.” 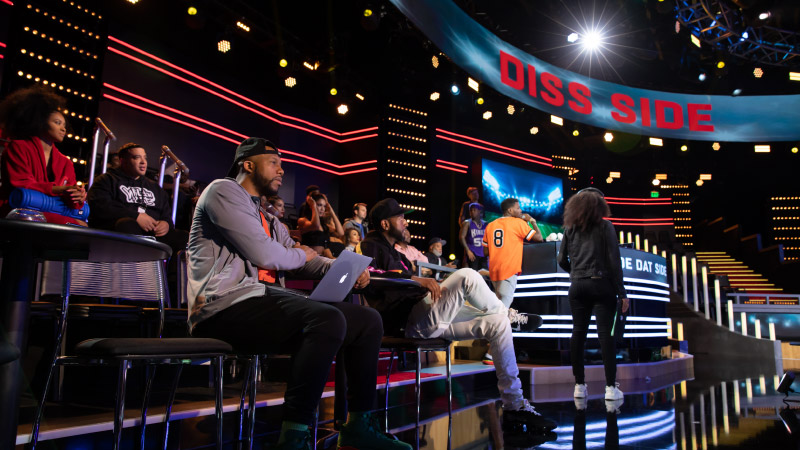 Matt Ford started as the Lighting Designer for the show in 2016 and has been with Wild ‘n Out for four seasons. The rig has grown substantially to currently have close to 300 moving lights.

“When you see this set, the scale is more like a large arena rock concert than what you’d imagine for a sketch comedy show,” Ford says. “We shoot the stage as if it is an arena and line it with vertical sections of Sunstrips. We have 230 of those, which give a lot of the visual backbone to it.”

Wild ‘n Out episodes usually feature four games per show, with three of them changing from show to show, so an important part of the creative process is giving every game a different look. At the end of every show there is always a musical performance, so there is a need to be able to seamlessly transition from an improv environment with game play to a performance environment. Ford designed the rig to be able to accommodate all of this.

“The challenge always from show to show is budget,” he says “It’s always a challenge of trying to accomplish your lighting goals with the amount of money you’ve been given. PRG is always great at finding creative ways to achieve those goals. Jeff Javier helps us look at substitutions that achieved both our aesthetic and monetary goals.”

Javier has similarly positive things to say about the Wild ‘n Out crew.

“What we do in our industry is very challenging but Matt, his gaffer Tommy Carey, best boy Juan Romero and the rest of the crew make it a pleasure,” Javier says. “They are all so talented, flexible and fun to work with.”

The need for flexibility is also imperative in the rig itself, because each act can be different, and the performers tend to run all over the place. 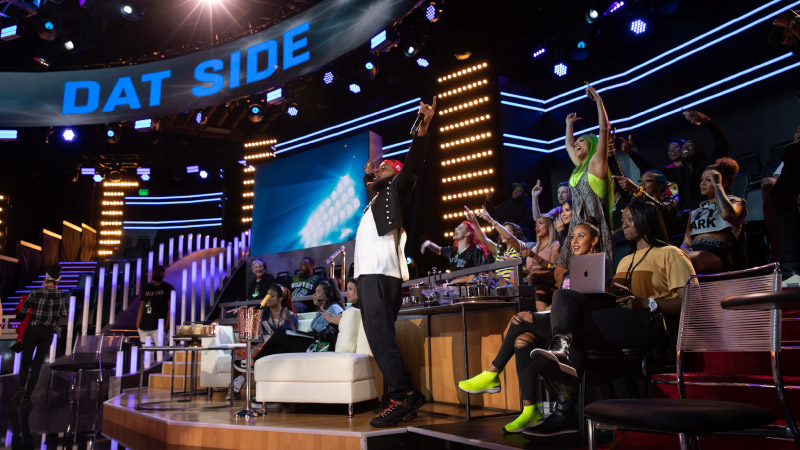 “In this particular show, it’s important that literally everything in break is automated so we do not have any conventional fixtures. Key lighting and everything are automated,” Ford says. “The meat of the key lighting is done with VL3500s as spots. The PRG Best Boy® GroundControl™ Spots are the other very important fixture we have.”

Ford described a particular moment this season where one of the performers went out into the audience during a musical performance.

“Because we had an automated fixture that could flip around and light the guy, we were able to follow him. Had it been a traditional Follow Spot, the operator would have been restricted by the basket. So, the PRG GroundControl has really been a life saver on this particular thing.”

Ford estimates that this is one of the largest lighting rigs on any MTV series.

“The support that we get from PRG is fantastic and having one vendor that supports both the lighting and rigging is very helpful. I love using them,” he says. 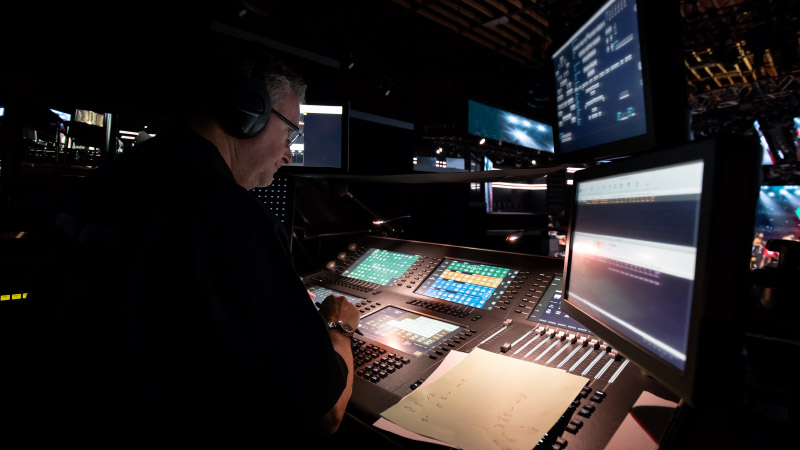 “Having a large footprint in Atlanta has been really beneficial in allowing us to respond quickly to any last-minute needs and requests for the Wild ‘n Out Team,” explains PRG Account Executive Lauren Paul. “We also have a deeply cultivated network of local technical talent that allowed us to support the LED video portion with 100% local talent – saving production thousands in travel costs.”

“When the show moved to Atlanta, we were able to roll out there with the same gear and level of support that our team had come to expect,” McKinney agrees.

Now in season 13, the show keeps getting bigger every year.

“With the help of PRG and Lauren, we have really helped the team evolve and grow the show into something amazing.”