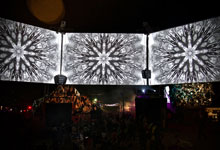 Glastonbury is well-known for being a festival with quirky elements and the bravado to push technological and creative boundaries; and it’s one that PRG are delighted to continue their involvement with. Nick Diacre, Technical Director of ddld, partnered with PRG to bring an innovative 360˚ video installation to the Gas Tower area in Shangri-La. Nick described the concept of the installation at Glastonbury this year: “We’ve created a 360˚ immersive projection environment in an outdoor arena with a capacity of 1200. The structure itself is inescapable to the audience, being almost twelve metres tall in places, and completely encompassing the arena. Over the period of four days, we welcomed over fifty guest artists, as well as VJs and AV artists to the arena to contribute content across our 360˚ screen.” Shangri-La’s Willy Brothwood was responsible for the design and build of the Gas Tower structure. 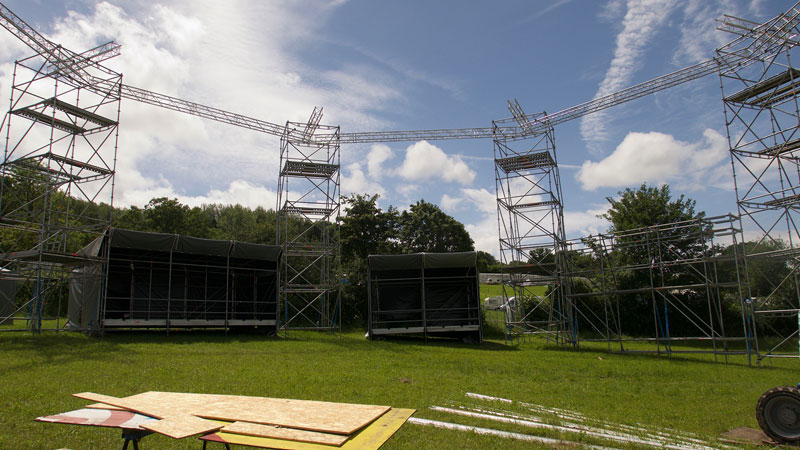 The 360˚ projection is achieved by mapping eight Panasonic PT-DZ-21k projectors across the playback surfaces. These are fed by a combination of d3, Touch Designer, and Resolume media servers patched through a 32x32 routing matrix. Nick explained: “We needed to create a system which not only served the purpose of simultaneously projecting eight HD outputs in a field, but also has the flexibility to accommodate the varying demands of the content creators we had performing in the space. The core team of VJs and a handful of those dropping in to play a set were more than comfortable to use one of our media servers to replay their content; but some would simply give us an output from their laptops—be it one, two or three screens, which we then fed into the d3 and remapped it onto the eight screens surrounding the arena." 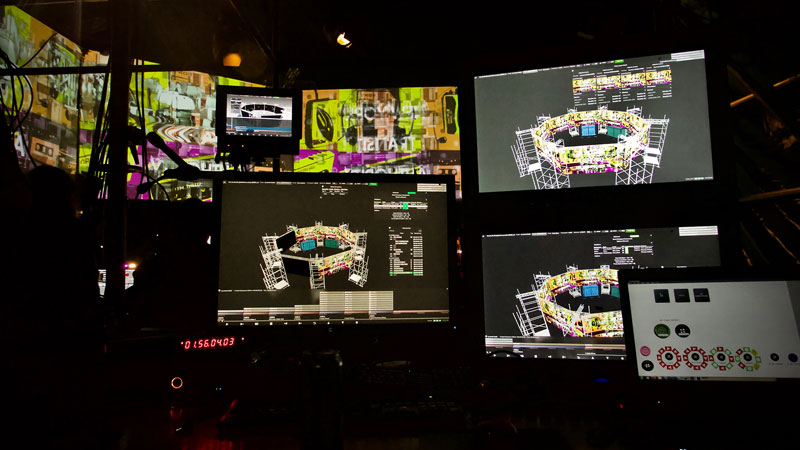 Nick worked with Shangri-La Creative Director Kaye Dunnings, Technical Production Manager Seain Loughlin and Production Director and Music Programmer Robin Collings to bring the concept to life. Ela Brunel Hawes oversaw the careful curation of bands, VJs and visual artists appearing in the Gasworks, these included: Limbic Cinema, a VJ collective from Bristol; Delta Process, video mapping experts from Italy; Enjoy Kaos Visuals; DJ’s Yoda and Cheeba who produced an AV centric set that was both reactive and interactive with the audience; and Ela’s own company EBH Luminaire, with partner Daniel Shutt. Nightly performances of ‘The Bomb’ were performed by ‘The Acid’, with production support from Smriti Keshari, Margaret Avery, and their d3 operator, Scott Millar. The original ‘The Bomb’ d3 show was developed by Ben Kreukniet and UVA. 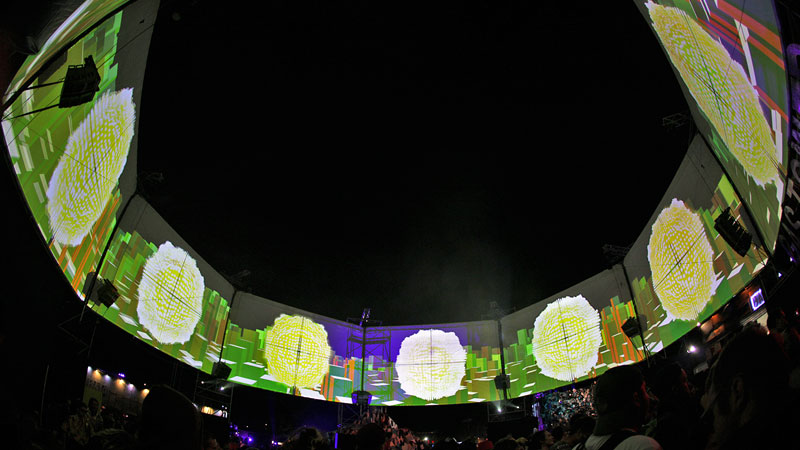 Nick explained what set their project apart from other endeavours: “Simply projecting video onto a 360˚ surface is really cool, but nothing new or particularly novel. However, the challenge was building a system which has the versatility of accepting all the artists over four days. We had our ups and downs, but everything went well and I think that what we achieved is something special.”

Video Systems Engineer Erica Frost has worked with Nick at Glastonbury for four years: “What I love about working with Nick is that he’s so enthusiastic and inspiring. Nothing is impossible with Nick, whenever we discover we need a new way of doing something, he’s open to different methods and solutions. His passion and drive is contagious, it rubs off on you and makes you a better creative technician. Before the Gas Tower project, we did a different video installation in Shangri-La, with live projection mapped content on a surface of tessellated triangles. Being an organically produced surface, there were no 3D models—which meant that each shape had to be individually mapped. Nick’s the kind of person who likes to take on ambitious challenges, pushing his own capability and that of the technology.” 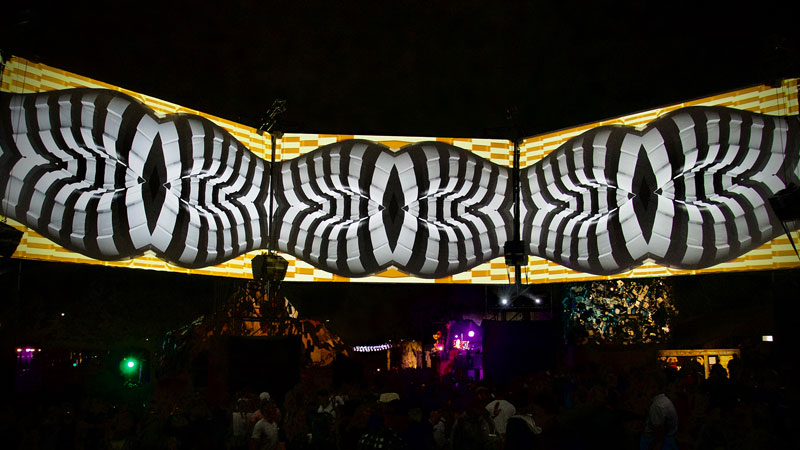 PRG Account Manager Rich Pow, facilitated Nick’s equipment needs: “It’s a pleasure, as always to support Nick at Glastonbury. We’ve worked together on this project for a number of years, and each time Nick ups the ante and makes a real impact at the festival. Nick’s a real street geek and always finds new ways to utilise the technology to his advantage. He’s full of ideas, work-arounds, enthusiasm and knowledge; he doesn’t just think outside the box, he jumps on top of it to get the best view in the house.”

Nick started the preparation for the Gas Tower installation several months before the event: “Despite designing an incredibly versatile but complex system for this year’s production, we’ve managed to reduce the amount of kit needed to make it happen; this is largely down to using the incredibly powerful and practical media server, d3. Everything was built so it could be quickly moved in and out of place on forklift trucks; it’s Glastonbury, we always need to prepare for mud! We loaded in four days before the field went live, and then spent the rest of the time fine tuning the system and running content. In our line of work, we spend so much time sitting at a desk looking at a monitor or two, to be able to see your work in such an arena is really, really cool.”