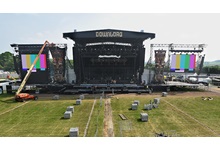 The UK’s premier heavy metal and rock event, Download Festival, is getting underway at Donington Park. For the 14th consecutive year, PRG XL Video will be supporting the festival with a comprehensive lighting and rigging package for the main stage, as well as stages two and three, the TeamRock Plus zone and other VIP areas. PRG XL representative Gordon Torrington who is overseeing our involvement on site explained, “This year’s Download’s a little different to previous set-ups, the three headline acts are touring so much lighting and video equipment, there’s very little load capacity left for a basic rig. For the other stages, we are providing a full system, but we’ve had to scale it back on the main stage to cover audience lighting and a floor package for the daytime bands. Rammstein alone will be hanging thirty tonnes from the roof, Black Sabbath and Iron Maiden have a similar amount of kit.”

Our lighting system on the main stage consists of Martin Mac Viper profiles, Mac Aura LED wash lights, Clay Paky Sharpys, Vari*Lite 3000 spots and 3500 washes, par 36 fixtures as well as 50 molfay lights around the perimeter of the stage working as audience blinders. GrandMA2 lighting consoles are being used for control across all three stages.

PRG are also providing video technology for Black Sabbath as they make their only UK appearance at Donington during their ‘The End’ world tour. The Birmingham born rockers who headline the festival on Saturday night are playing in front of a 17M x 4.5M V12 LED screen, fed by two d3 media servers and a versatile camera package made up of the PRG Europium camera system. Account Director Stefaan Michels is looking after the band’s video needs in Europe, “We’re doing the video for the world tour. When you tour a system in so many venues it needs to be versatile and very well prepared. What we have lined up for Saturday is going to look amazing and do justice to such an iconic band.”  Black Sabbath are using six PRG Bad Boy followspots on the front truss, and three PRG GroundControl followspot systems, with the specially adapted Bad Boy lumieres mounted on the back truss.


Iron Maiden, who stop off at Download as part of ‘The Book of Souls’ tour are using a substantial amount of PRG XL lighting technology to replicate their touring rig when they close the event on Sunday night. Over 100 Martin Mac Aura LED wash lights, as well as Mac Viper profile lights and Vari*Lite VL3500 are packaged in PRG BAT truss for ease of transportation and hanging. Account Director Yvonne Donnelly Smith, who handles Download festival for PRG XL Video explained, “one of the biggest challenges of doing festivals are the overnight changeovers, proper planning and preparation are essential, as is using the right equipment. BAT truss is perfect for one off shows where time is tight, the trusses have been pre-loaded with lights and cabled up in our Longbridge warehouse during prep. When we get to site, it’s a simple as connecting the truss and cables, and hoisting the trusses up. For the load out, they are dropped back onto their wheels, disconnected and loaded onto the trucks ready for being stripped out back at the warehouse.” We are also providing Iron Maiden with a HD camera system consisting of a Blackmagic Atem 2 M/E switcher flypack, 4 Sony HXC-100 HD broadcast cameras, Canon 70x, 21x and 11x lenses, 4 HD POV drum cameras and 6 Atmos Blade hard drive recording devices.

This weekend is a busy one for PRG XL Video, when the festival season really gets underway. As well as our involvement with Download Festival, we also have a team of crew on the Isle of Wight Festival where we are supporting the festival with lighting, video and rigging. Field Day is a more intimate festival, being held in London’s Victoria Park, to which we are supplying video.

Check out our facebook and twitter pages for regular updates throughout the weekend. Let’s hope for fine weather!