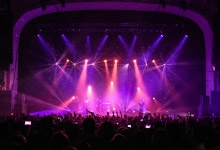 Canadian singer-songwriter Claire Boucher, who performs under the moniker of Grimes, recently made several appearances in the UK as part of her Ac!d Reigns tour. The production, in support of her critically acclaimed 2015 album Art Angels, used a versatile floor lighting and console package from PRG XL Video in Germany as they played venues across continental Europe before shows in Manchester, Dublin, Birmingham, Leeds, Bristol, Nottingham and Glasgow; but for the sell-out extravaganza at London’s iconic Brixton Academy, Lighting Designer Sarah Landau called on PRG XL Video’s UK Senior Account Manager Roy Hunt to help add a little additional razzmatazz to an already impressive light show with an overhead lighting rig.

Roy said “Sarah’s artistic and creative reputation is exceptional and the opportunity of working with her on any project is exciting, especially something like this.”

With the tour starting off in Berlin, it made sense for the main lighting system to be supplied by PRG XL Video’s facility in Hamburg, where Account Manager Marco Mahl took care of Sarah’s needs. Discussing her choice of lighting products, Sarah said “I needed versatile fixtures that could create a variety of looks with minimal fixture counts. I was excited to try Clay Paky Mythos for the first time; they are the best of a Sharpy and Pointe with colour mixing as well. I used Martin Mac Vipers for backlighting and projection through the camouflage netting—we needed a bright fixture with a wide zoom and interesting gobos, and they’re very reliable. The Robe Robin 300s were a bright, fast wash, perfect for backlighting and with a wide enough zoom for us to use as cyc lights too, I selected four Sharpy washes to provide sculptural side light from the downstage and midstage edges, they were very bright, even using UV filters!” 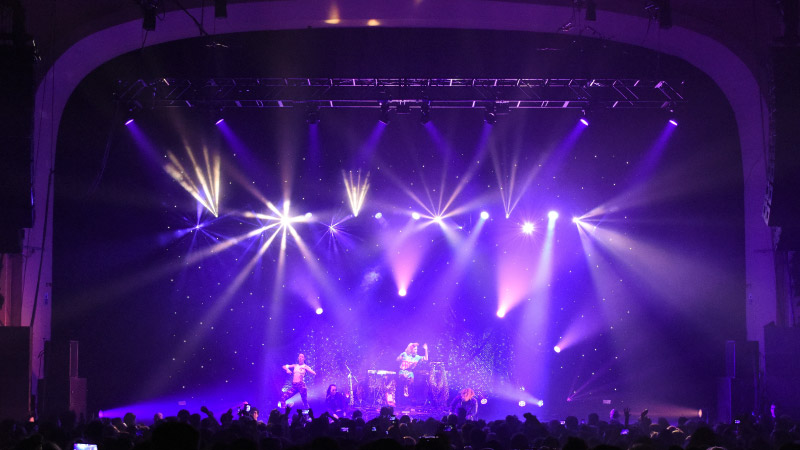 When asked how lighting the Brixton show differed from other dates on the Ac!d Reigns tour, Sarah explained “Because Brixton is an empty room, I was able to hire in an overhead plot. PRG XL Video supplied Best Boy HP and Robe Pointe moving lights, Solaris Flare LED strobes, Martin Mac Aura LED washes and an RGB star cloth. The star drop added depth and made the relatively small rig onstage look much bigger and added lots of ambience to the ‘pretty’ songs in the set list.”

Grimes’ stock has been steadily rising since her emergence with the albums Geidi Primes and Halfaxa in 2010. Her name has been included on numerous shortlists and has been marked as an artist with extraordinary potential. Boucher cites her musical influences as being drawn from video game music, k-pop, Japanese composers, and artists as varied as Christina Aguilera, Skinny Puppy, Nine Inch Nails, Beyonce, Marilyn Manson, Enya, Dizzee Rascal, Aphex Twin, Mariah Carey and Outkast. Hermione Hoby of the Guardian described Grimes’ layered style as “sounding a little like everything you’ve ever heard, the whole sounds like nothing you’ve ever heard.” 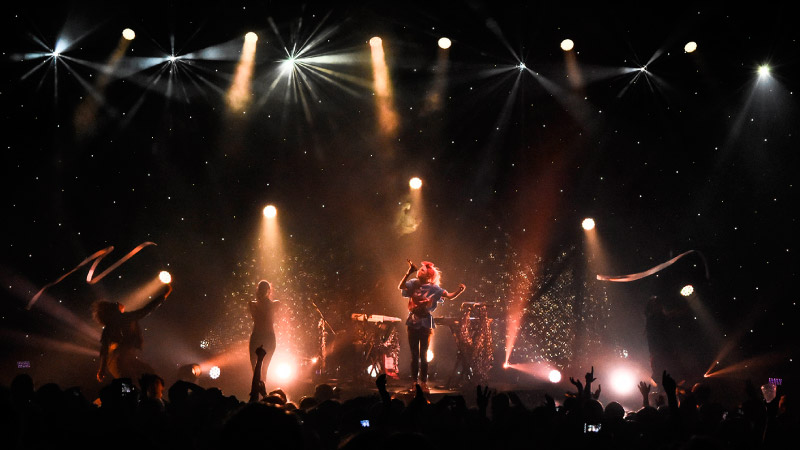 NME magazine chose Grimes’ fourth album as their album of the year for 2015, writing “Art Angels is an album everyone should own, that everyone can take something from. It’s bold, angry and provocative—a statement of intent from an artist coming of age and imprinting her singular worldview on the mainstream.” Grimes’ idiosyncratic brand of electro-poppy sounds almost defy categorisation, Sarah Landau refers to her work as art-pop, “It’s catchy and beautiful, but also very weird and experimental. Her latest record combines many disparate musical, literary, cinematic, artistic influences, and ends up representing Grimes’ eclecticism perfectly.”

Claire Boucher’s a creative force to be reckoned with, in addition to her musical talents, Claire also directs some of her music videos and creates her own album artwork. Regarding the aesthetics of the Ac!d Reigns shows, Sarah commented “Claire and I collaborate on the set designs—it was her idea to incorporate the camo netting, but I chose the colour and shape of the structure. When we first started working together, Claire and I had general conversations about the aesthetics and vibe, realised we were on the same page, and she has trusted me since.”

Sarah has handed over to the brilliant lighting director Michelle Sarrat as Grimes tours North America, stopping off for two appearances at Coachella festival before the band returns to play a number of European dates in the summer, including a handful of UK shows and appearances at Glastonbury and Latitude festivals. 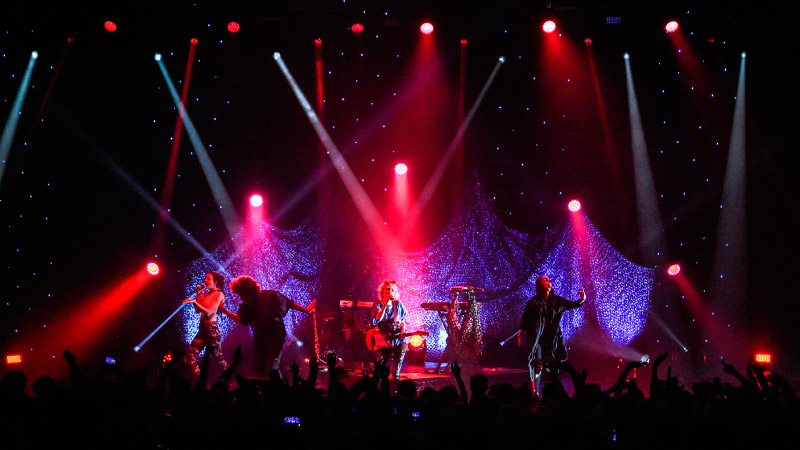