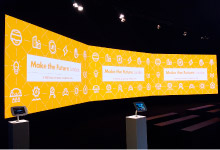 The annual Shell Eco-marathon events take place across Asia, the Americas and Europe. This year the European event was part of Make the Future London – a festival of ideas and innovation. The events challenge young engineers to design, build and drive energy efficient vehicles that go as far as possible on the least amount of fuel. The student teams compete in a number of categories on a variety of circuits.

For the Shell Eco-marathon Europe in London, the circuit was built in the Olympic Park and surrounded with a range of interactive experiences which the public could enjoy, whilst learning about Shell’s support for future energy sources and technologies. 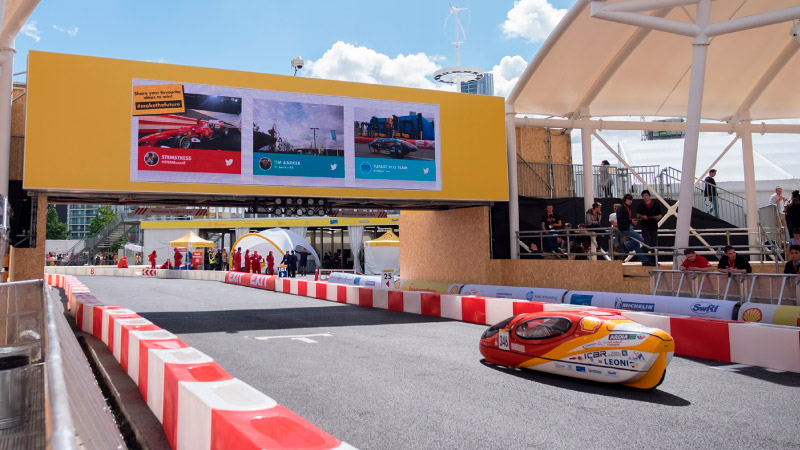 Over the three-day event, 30,000 members of the public visited the site. PRG XL Video’s Account Manager, Rich Pow, worked with the team from Imagination to realise the extensive video brief across a variety of areas. He comments: “It’s always a pleasure to work on the Shell Eco-marathon events with Imagination. Their team are second to none, and their designers, production and health and safety staff ensure that the creative idea is delivered to the highest standard. We were delighted to support them with the technology they needed to make the event a success.” 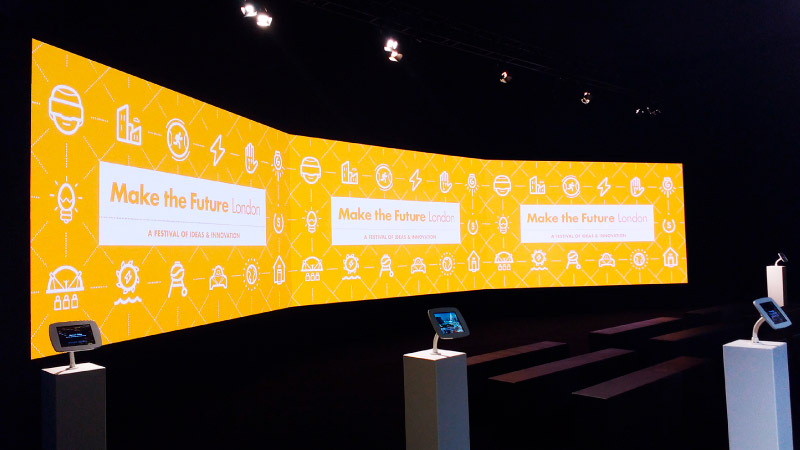 PRG XL Video supplied all rigging and lighting for the stage as well two ROE MC-7 7mm LED video screens – one either side of the stage. These displayed IMAG footage from two wireless cameras in the pits, and on the main stage, two cameras fixed above the Eco-Marathon circuit, and from eight of Imagination’s 4G camera which were mounted in or on the cars. PRG XL Video’s central control area on site included a Grass Valley Kayak-based portable production unit (PPU), which took all the camera feeds, and fed them to the IMAG screens with live vision mix by Mark McCaffrey.

Close to the main stage, in the Pavegen area, an interactive football game for children helped visitors learn about the power of energy. Two outdoor LED screens, built into the set displayed timings and the best scores from across the weekend. 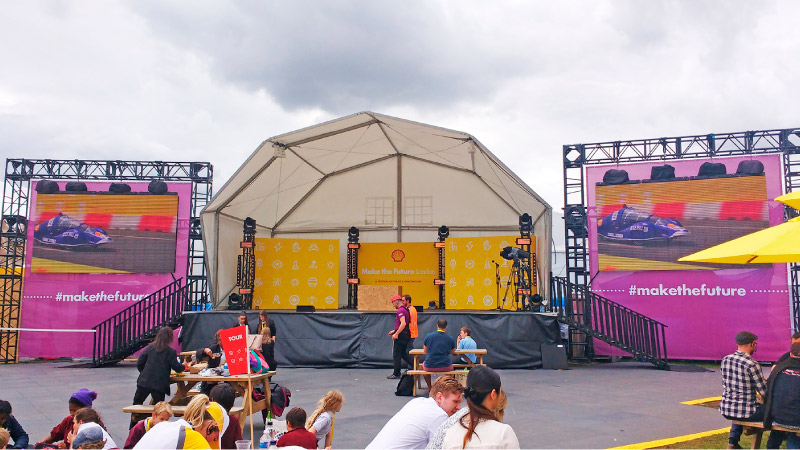 PRG XL Video supplied Barco e2 screen control systems located in the central control area, and these were used to manage the various content feeds to the LED screens and monitors across all the main areas.

In the Future Energy pavilion, a temporary structure near to the circuit, PRG XL Video supplied rigging and lighting via a central truss. HMI pars were used for the exhibition space highlighting interactive games, exhibits which explained the development of new fuels, and even a Ferrari Formula 1 car alongside an explanation of how the sport is developing and embracing new technology to power the world’s fastest racing series. The pars were selected as discharge lamps are more energy efficient than their tungsten equivalents. 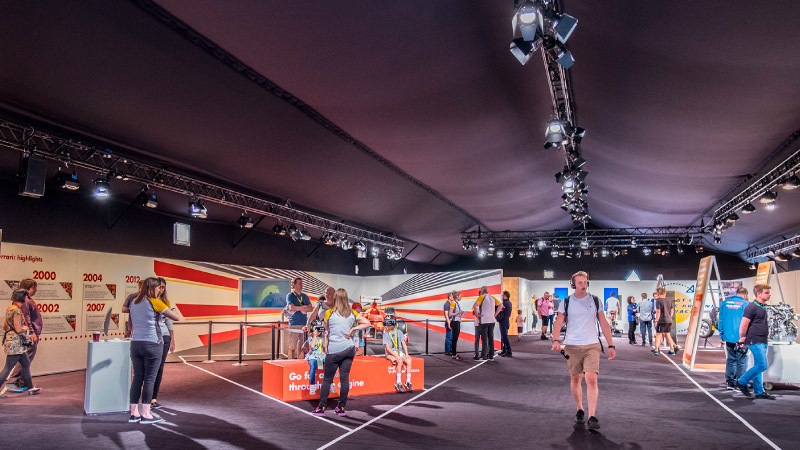 The Future Energy pavilion also included a variety of large monitor screens around the exhibits displaying information films. They were also used on an interactive exhibit with stationery bicycles with monitors powered by the bikes.

Within the exhibit, a set of transparent running orbs were set up, and PRG XL used their GLP impression 120 RZ LED lamps to light the orbs and make them glow within the indoor environment.

On the main stage, Tabner’s design was informed by the stage structure, which had a weight limit. With this in mind, he opted for a floor package consisting of lighting totems built from Mini Beam Truss Towers. The fixtures needed to be bright and punchy for daylight use, and PRG XL supplied a combination of PRG Icon Beams, Sun Strips, and Solaris Flares for the maximum impact. 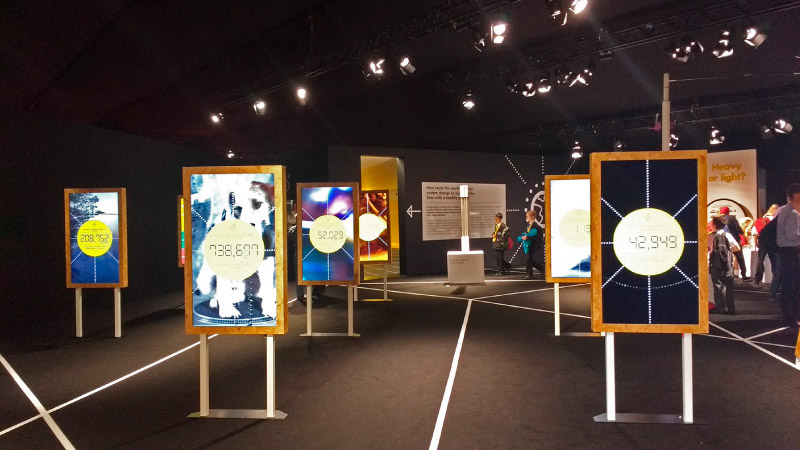 For the Shell Eco-marathon Europe, Imagination constructed a temporary circuit for the energy efficient cars to run on. Enabling the public to cross the track, a bridge was constructed and one side of this included an 8.4m wide x 2.4 metre high LED video screen. The screen was used to display live social media posts from the public using the #makethefuture hashtag, as well as practice heat and race announcements.

Rigged below the screen, at the front of the race grid, five pairs of PRG XL’s Expolite LED fixtures were used to create a set of traditional starting lights, which gave the racing teams the signal at the start of each session. The Expolite units are energy efficient, and offer plenty of brightness in sunlight. They are also IP rated to make them weatherproof which made them the ideal fixture for outdoor use.

Nearby in the paddock and parc ferme area an array of LCD screens were used to display results and timings for the competitors and public. The temporary paddock and preparation areas were fully covered with lighting and rigging from PRG XL.

As part of the package of technology and services provided, PRG XL Video’s Account Manager, Ade Stead and Head of Rigging, Q Willis, and worked closely with Imagination’s team on the rigging specified, preparing the necessary CDM (construction, design and management) regulatory paperwork for all the rigging, lighting and video across the site.

In a further efficiency PRG XL Video used their Smartmast structural system for a large windsail banner located by the start-finish line. The Smartmast system allows for the ballast loading required to be calculated based on surface areas within a set of specified parameters. Because the system uses pre- certified designs within its parameters, it does not require any additional calculation or inspection by a structural engineer, saving time and costs on site.

Cameron Bannister sums up: “We really enjoyed supporting the team at Imagination on Make the Future London, supplying a full package of lighting, rigging, and video for the event. The technology we supplied helped contribute to the energy efficiency of the event, and our crew across all three disciplines delivered to the highest standard.” 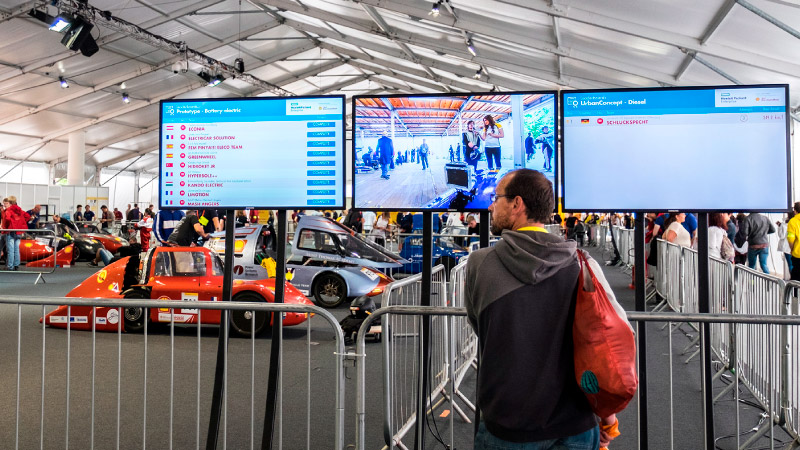