After an impressive debut in 2019, EDM fans have waited with bated breath for the return of MDLBEAST Soundstorm – the world’s largest (and loudest) festival. The wait was certainly worthwhile, and Soundstorm 2021 roared back into the Saudi Arabian capital, Riyadh with an even grander and extraordinary second edition. The line-up across the four-day festival featured the biggest names in dance music, including: Martin Garrix, David Guetta, DJ Snake and Tiësto, as well as 11 of the Arab world’s biggest stars, from Nancy Ajram and Elissa to Tamer Hosny and Amr Diab. These performers and over 700,000 fans partied across eight stages, including the behemoth main stage “Big Beast” which stood at 250m wide and 42m tall – one of the world’s tallest and largest stages! PRG were on hand yet again to provide 360° technical support for Big Beast, as well as site-wide EVAC PA and lighting activations for one of the site’s “VIB” entrance gates and projection mapping of the MDL Town Sculpture.

This epic vision for the main stage was a huge undertaking for the PRG team. PRG supplied gear from its newly established Riyadh warehouse, and this was then supplemented by various European depots. Over the course of our 7 months of continuous prep and planning and almost 3 months of set up on site, we delivered nearly 600 tons of technology; including the stage’s entire video, lighting, audio, comms and rigging package.

The record-breaking, continuous screen comprised of over 4,000 sqm of LED, and around 70 million pixels. For the screen’s centre, PRG supplied 2,200sqm of its brand-new Titan-X panels which were developed by PRG and Infiled this was supplemented with ROE MC-7H for the mid wing sections, plus ROE CB5 for the DJ Riser. To cater to the mass of stock, weight, power and pixel considerations that come with such a large single screen project, PRG designed a comprehensive control system, delivering a large yet flexible sync network solution for all artists.

For lighting, the main stage rig included over 1,000 fixtures, with 130 Universes of DMX, 6 x 400A Supplies and 26 km of cable. Fixtures included GLP X Bars, JDC1’s, Robe Pointe, Hybrid fixtures, and LED Bars. For audio, PRG supplied and distributed L-Acoustics K1, K2 and KS28 systems across the main stage and the delay towers which ran using L-Acoustics LA12X controllers and were monitored using P1 processors. Carrying it all were PRGs master riggers with a truss 3.3km long, and 410 hoists.

“The great thing about working with the 360° from PRG is that each department can draw upon its own wealth of expertise and resources, and each team comes together to deliver one exceptional event. This is a bespoke project, and so PRG built a bespoke team. Such a vast production really needed the internal workings and conversations between all our expert technicians to flexibly develop solutions smoothly. From a production point of view, this certainly makes things a lot easier and has definitely been appreciated on this show.”  Yvonne Donnelly Smith, UK Sales Director Music. 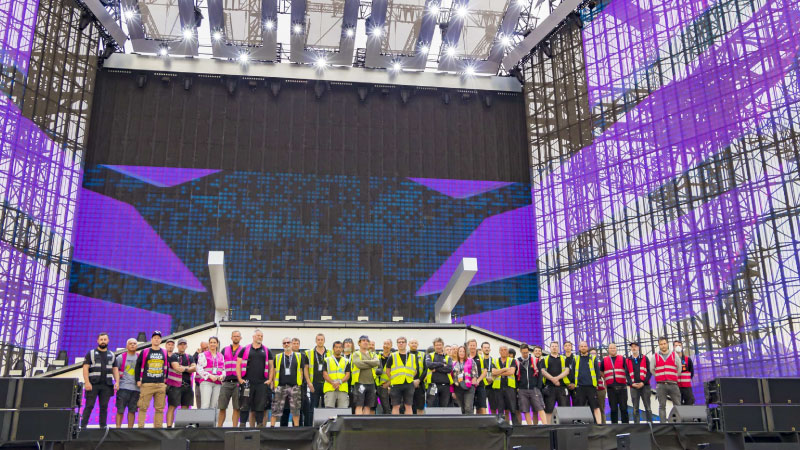 
To match and deliver the increased scale of the 2021 festival, PRG mobilised its global workforce. Working over 3000 man days, 130 members of PRG crew headed to the event site from our offices in Riyadh, UK, Dubai, Belgium, Germany, and Spain.

“What I see we are doing here is we're at the very forefront of the formation of the entertainment industry in Saudi Arabia. We've insisted that our vendors have a Saudi Arabian presence because we can't continue to support events unsustainably. We have to get going here and everyone has shown a willingness to do this and PRG have now moved into Saudi Arabia.” – Michael Jobson, Executive Director – Events, MDLBEAST.

In the spirit of the Saudi 2030 vision, this focus on supporting the region and its wealth of talent is certainly shared by PRG. Thanks to our newly launched Riyadh office and warehouse, PRG now has a pool of regional assets and resources for future events. After proudly supporting the Saudi Arabian F1 Grand Prix in Jeddah and Soundstorm 2021 for MDLBEAST, PRG has established a regional depot which already houses a great selection of assets, building a foothold for accessible equipment in Saudi Arabia to deliver exceptional events in the future.

“Part of our drive within Saudi Arabia will be to make sure that we are enabling and empowering and recruiting local Saudi resources and training them to ensure that they develop the skills to help deliver the events of scale that we put on. And that's one of the key drivers where we've been aiming our expansion within Saudi over the last three years.” Bruce MacLean, Manging Director PRG Middle East.

PRG would like to congratulate and thank MDL BEAST, Production Glue and Silent House for this outstanding second edition of the festival and give special thanks to our incomparable global PRG team for their incredible work.