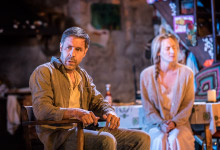 Produced by Sonia Friedman Productions, Neal Street Productions and Royal Court Theatre Productions, The Ferryman not only has multiple 5-star reviews to its name, but also the accolade of being the fastest-selling play in the history of the Royal Court Theatre. Now the play, written by Jez Butterworth, and directed by Sam Mendes, has transferred to the West End’s Gielgud Theatre where it is now booking until 19th May 2018 due to overwhelming demand.

Olivier Award and Knight of Illumination Award-winner Peter Mumford has lit Rob Howell’s set for both runs of the production. The play is set in rural Derry in the early 80s, where the Carney farmhouse is a hive of activity preparing for the annual harvest. A day of hard work, will be followed by a celebration of the harvest, but this year they are interrupted by a visitor.

The entire action takes place across two days, with an introductory scene then leading to the remainder of the action unfolding in the kitchen of the Carney household. With a single set used for the majority of the play, the lighting becomes key in transporting the audience into the kitchen setting, and in transitioning through the day as the sun rises and shines through the window. 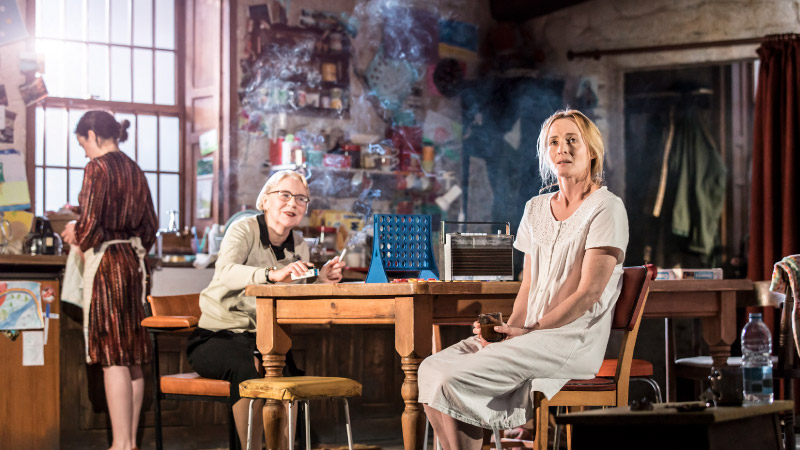 Lighting designer Peter Mumford explains his initial approach to designing for a show: “Once I have familiarised myself with the material - opera score/script/musical composition etc. - and met with the director and designer for initial concept and design meetings, I tend to concentrate on creating a ‘palette’ that will enable me to create my work alongside and in tandem with the direction of the performance and the surface design. Whilst I will almost certainly have imagery in my head, I regard my real creative process and application to happen in the theatre with all the other elements present because they are basically the canvas on to which I work.

He continues “My approach is more like a complex preparation - creating a shape for the lighting rig, choosing the right equipment, making decisions about colour, but I never commit to the number of cues or precise pre-planning of lighting states - that is something I create in situ.”

For his design for The Ferryman, Peter first read the script and met with Sam Mendes and Rob Howell, attending read-throughs and following the evolution of both the script and set design. Alongside this, Peter began to map out the lighting design: “I had to design and draw it, work out the technical specifications to fit into the theatre. In this case we knew that it had to work for both the Royal Court, and later The Gielgud, so that became an additional technical consideration as well.” 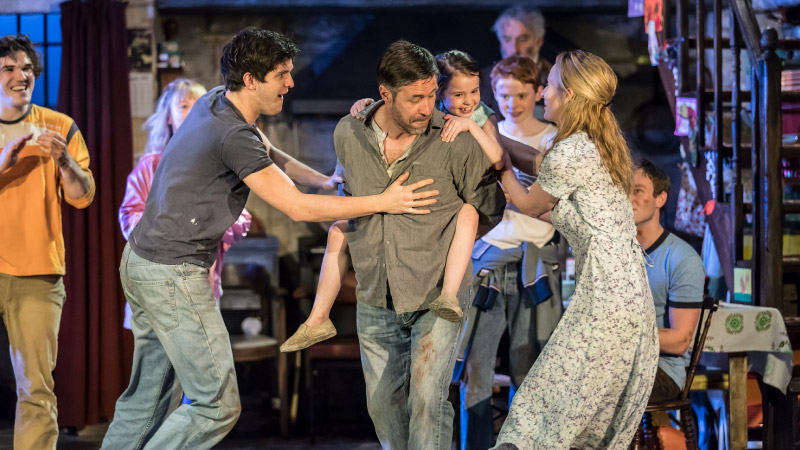 Peter did not work alone on lighting for The Ferryman, bringing with him lighting programmer, Cat Carter, and production electrician, Matt Harding. He was supported by assistant designer, Rachel Cleary, who Peter describes as “brilliant! I’m sure she’ll be seen working as a lead designer in her own right before very long.”

With the play mostly taking place in a single room, over many hours, the imitation of natural daylight, sunrise and sunset was a key feature of the lighting. Peter explains how this was achieved within the set: “Rob Howell’s design gave me a ceiling over the whole room, but he also gave me a window, thank goodness! I never mind sets with ceilings, but it does, to some extent, define how one approaches the lighting.

Peter explains how the light seemed to move within the room as the light changed ‘outside’: “I had a considerable number of units behind the window to maximise the way I could move both colour and light around the room; creating the feeling that the natural light from outside was the dominant light in the room. To that extent, the ceiling actually helped to show the feeling of a sun setting and the light moving across the space. Here the ETC Lustres were invaluable because I could create smooth colour changes over cues that were as long as 12 minutes in some places. I wanted to create seamless changes where, in fact, the light goes on a considerable visual journey, without being too apparent.” 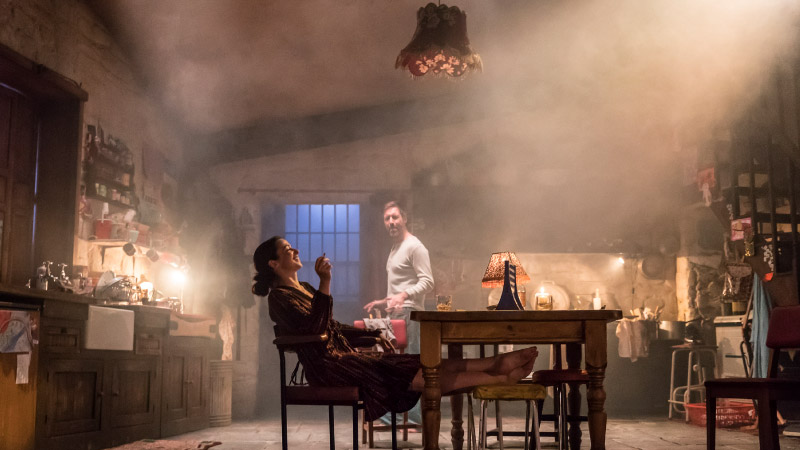 Internal room fixtures were essentially cosmetic, but were part of the story. Peter explains: “To some extent they give me a reason to create a pool or glow of light in different areas of the room, for example, there is a moment when Caitlin enters after the sun has gone down and the room has become quite dark. She switches on the centre pendant light, and that gives me license to completely change and transform the room lighting with the snap of the switch, while still being within a completely naturalistic narrative.”

Some scenes in the play include candlelight, creating an eerie mood and calling for a very different lighting effect. Peter used Par 16 Birdie lights to achieve this. He explains, “I hid little ‘Birdies’ in corners and crevices of the room – influenced by the idea that the candles used in Act 3 would be distributed around the room, and would naturally send a variety of random shadows up on to the walls and ceiling. Of course, the candles by themselves would not be bright enough to illuminate a long scene in a big theatre, so I amplified this quality in a controlled way.”

For night-time scenes the room has a hearth-like warmth, Peter explains how he created the effect using both colour and the lighting angle, “Whilst the Birdies relating to candlelight were set mostly on the floor, I used another layer of units low slung from the front of house, in particular a couple of (quiet!) moving lights that could imperceptibly track action and maintain intimacy.” 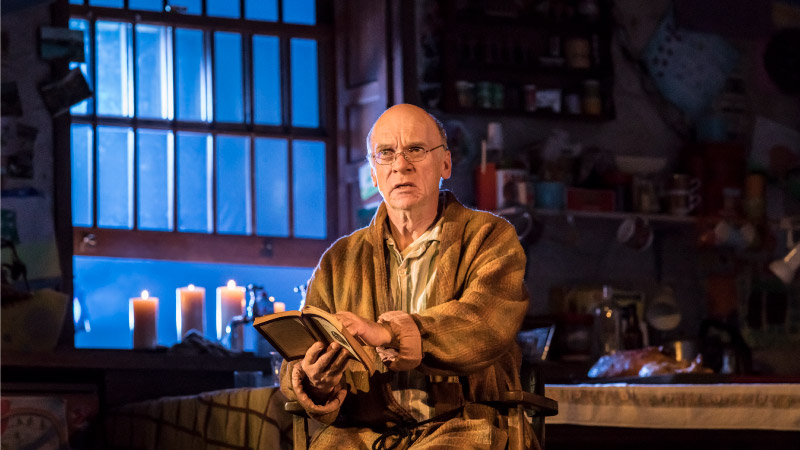 “I had to use good old VL1100s because of the noise factor. They are still the only usable moving light in drama situations like this, and I still haven’t found another moving light which will allow the absolutely smooth introduction of diffusion to the beam – one of the main factors that allows me to move light around the set imperceptibly.”

Lighting the performers, capturing their movements and facial expressions, has its own specific requirements. Peter explains, “The key light for me was the light coming through the window, and wherever I could, I used that light to edge and shape. Similarly, another source was that which I got into the space through the stair well, along with runs of GLP X Bar 20 strip lights that I had hidden behind the ceiling beams. Much of the front of house lighting was rigged as far left and right as possible, to maintain ‘shaping’ and not give too much flat light.

“There were, of course, units coming straight in to give facial clarity, but hopefully working more as ‘fill light’ on an actor who was already benefitting from the more three dimensional quality from the side light”. 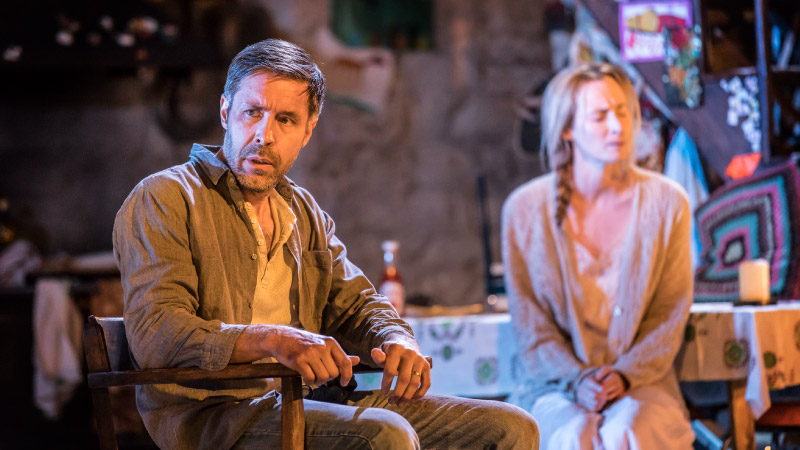 With Rob Howell’s set design presenting some interesting challenges for the lighting, Peter sums up how his work on The Ferryman differs from many other productions, “It’s not a huge rig, by any means, and it’s what I would call an unusual focus. Each light has pretty much its own job, and there are not really any basic washes as one might normally have.”

The Ferryman is at the Gielgud Theatre until 6 January 2018. For tickets visit www.theferrymanplay.com.

£12 Day seats are available for each performance at 10.30 am in person at the Gielgud Theatre Box Office.