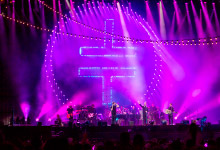 With the main stage lighting and rigging set-up supplied by PRG XL Video, Lighting Designer Tim Routledge was asked to provide a unique lighting design for the Take That show. He contacted PRG XL’s Director Music Group, Yvonne Donnelly Smith to supply over 450 additional fixtures to supplement the main rig.

He explains the brief behind his design: “The show was aimed to be a full celebration of summer festivals in Britain; from classical picnics in the park to Glastonbury, and everything in between. The band are well known for embracing production elements to make a full cohesive show and this one off show was to be no exception.”

With budget in mind, and focusing on delivering the kind of show Take That are renowned for, Tim opted to utilise pre-visualisation for the design and rehearsal of the show. He elaborates: “I opted for maximum bang-for-my-buck and decided to not have the rig for rehearsals. This allowed us to spend the entire lighting budget on hire for the day itself, so a weird week was spent at LH2 Rehearsal studios with the show being rehearsed to scale, and Tom (Young, programmer) and I sat with a WYSIWYG screen programming offline. 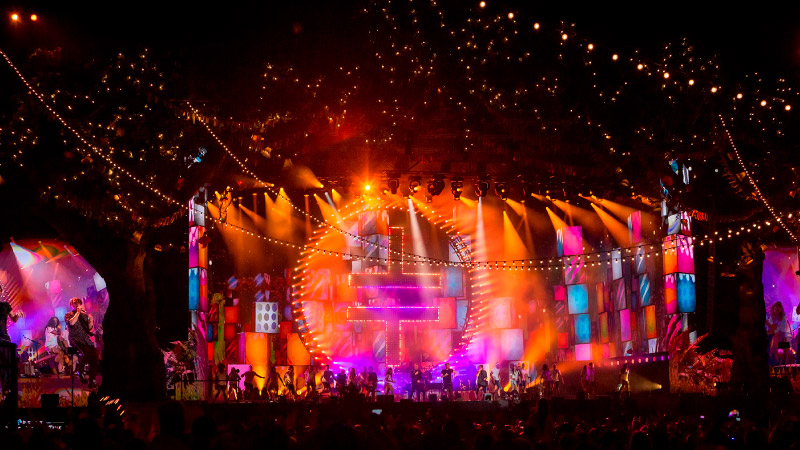 With another show the night before, the challenges of changing to a new set-up were not inconsiderable. Tim continues: “Logistically this was always going to be epic; it felt like we were doing a closing ceremony as everything was installed overnight with no dark time and a large number of props, practicals and set dressing (plus a big hole in the field to install a hydraulic lift) and it all had to be installed ready for midday doors.

“With Mumford & Sons, the night before, having removed the entire festival rig to install their touring rig, PRG had to work fast to reinstall both the overhead festival rig plus all of our extras.”

The central fixture of the design was a giant lit Take That logo which was flown centrally upstage in front of the main festival video screens, which were supplied by Video Design. Rebuilding the main festival rig overnight, as well as supplementing the lighting with Take That’s additional requirements was no mean feat. A challenge which PRG XL Video Crew Chief, Luke Jackson, and second in command, Jason Dixon, relished!

Jackson comments: “Our team of a dozen technicians did an excellent job, delivering under the pressure of re-installing the main rig overnight and getting Take That’s extras in place for the next day’s show.”

The Take That logo, designed by Tim Routledge was created using a custom rigging frame. Consisting of a large 10-metre diameter circular truss with the double T logo incorporated in the centre, PRG XL Video constructed the custom shape with additional pipe elements built by Steelmonkey. The shape was pre-rigged at PRG XL’s Longbridge warehouse before the show to ensure all the fixtures fit in place.

“The TT logo itself had well over 250 fixtures on it,” commented Tim Routledge.  “PRG’s team, led by Luke Jackson, did a sterling job overnight, kept chipper and looked after us fantastically. This show was always going to be special as we really took over the stage and the site and transformed it for this one night. This included taking control of all of Hyde Park’s LED architectural lighting down the length of the field, to give those at the back a more immersive experience. Luke’s team could see that this was going to be worth all the work and that gave them the push to get us there overnight.”

Part of the Take That show design included a huge catwalk leading to a B-stage further down the field. This presented Tim Routledge with an additional lighting challenge which PRG XL Video was able to solve: “Our huge catwalk was so long that the B-stage was past the viewable area of the front followspot towers. Thanks to the marvelous invention that is PRG’s GroundControl™ Followspot System, and their compact size, we were able to rig three spots on to the delay towers further down the field. These took over the job of the front spots as Take That approached the middle of the catwalk.”

With space at front of house at a premium and the space around the catwalk occupied by the audience, the GroundControl Followspot System’s remote control units had to be located elsewhere. The system allows for the control units and operators to be located up to 610 metres away from the spotlight fixtures, and for this show it enable them to be operated from backstage.

Yvonne Donnelly Smith said: “We were delighted to work with Chris Vaughan of CV Productions, and Tim Routledge to realise their special design for Take That’s Hyde Park show. The band’s production designs are always impressive, and we’re happy to play a part in bringing that to life! Our on-site crew were stellar, as always, especially in view of the challenging overnight build. The show looked amazing!”