For ten days – from 17 to 27 September – visitors to the Opel booth at IAA 2015 could create their own personal ‘Opel Selfie Jump’ – a Bullet-Time tracking shot with frozen scenery, known from the Matrix films and numerous commercials. The automobile manufacturer relied on the experience of PRG XL Video for the planning, design and technical implementation of their exacting requirements. Bellprat Associates AG was responsible for the idea and the concept. The graphical user interface of the terminals, the Facebook connectivity and implementation of the barcode scanners was realized by bluelemon Interactive GmbH.

For ‘Opel Selfie Jump’ the full-service event provider developed a system using 75 digital SLR cameras arranged in a semi-circle of 270 degrees, which was aligned with millimetre precision with the booth visitors in the centre of the circle. As a visual aid to the participants, a monitor with countdown was displayed below the cameras. The shutter release of the 75 cameras was done manually using a remote control by an employee at the Opel stand.

The instantly-created three-second video sequence from the 75 simultaneously acquired images was incorporated into the interactive content displayed on high-resolution LED screens and 3D objects around the Opel booth. At the same time, visitors could access their own ‘Selfie Jump’ posted on the Opel Facebook page.

The technical requirements for hardware and software with which PRG XL Video was confronted during the two-month design and production phase were enormous. The event provider had to respond to a variety of technical challenges including automating the post-processing of the camera images as video to make the sequence available immediately.

During the production phase of the event, PRG XL Video developed, specifically for this purpose, a modular system of opto-couplers and a microcontroller. These were able to synchronously trigger all of the cameras, start the countdown over the network, begin the rendering process, and display any error messages. This allowed the error detection mechanism to autonomously utilise the fallback system.

This solution was made more impressive because of special provisions the ‘Opel Selfie Jump’ system required for its prototype. Drawing on experience from previous projects, the team managing the project had to install the camera rig separated from the jump landing-pad to avoid transmission of vibrations to the cameras.

Since the installation of the cameras was covered to protect against unauthorized access and to avoid dust entering the mechanisms, PRG XL Video developed a custom software solution that enabled them to remotely configure the cameras both individually and collectively. In addition, the team had to consider sufficient manual access to the camera hardware to enable servicing and recalibration.

The ‘Opel Selfie Jump’ project was a complete success! Over the ten days of IAA 2015 more than 3,500 video clips were created by visitors on the Opel stand – meaning the 75 cameras clicked and produced a Bullet-time tracking shot every 2 minutes! 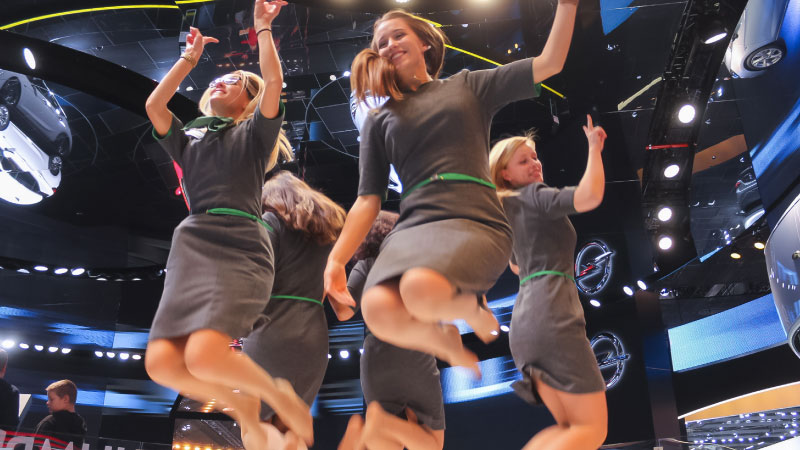