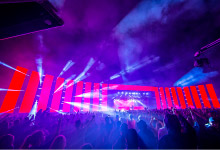 Over the August 2016 Bank Holiday weekend over 70,000 music fans descended upon Daresbury, Cheshire for one of the world’s biggest electronic music festivals, Creamfields. The festival has grown in size each year, with the Cream organisation constantly raising the bar in terms of line-up and production values.

Technical event producer LarMac Live was once again called in by promoters Cream and Live Nation to liaise with the artists and deliver the premium technical production and high quality visitor experience that Creamfields audiences have come to expect. 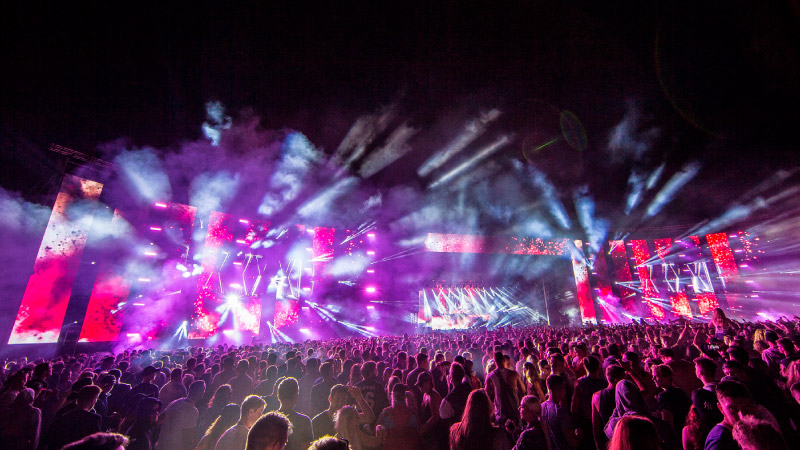 To help LarMac Live deliver the largest Creamfields to date, PRG XL Video were brought in to supply video, lighting and rigging across the two vast main stages – Arc, and Horizon, together with video across six more stages around the 900-acre site.

PRG XL Video’s Head of Rigging Services, Q Willis, oversaw a team supplying the rigging across stages CF01 - Arc, and CF02 - Horizon. He explains: “During the design process we worked closely with Charlotte Scott and Igor Pacejs from Acorn Events who built the stage structures, ensuring that the rigging for video, lighting and audio was accurately assessed/plotted and installed as per the agreed plots.”

Both of the two main stages – Arc and Horizon – had new designs this year. Arc was a curved structure, wider than last year’s North Stage, extending around the audience to the sides and giving them a truly immersive experience. Horizon was a mix of varied height towers clad with LED, giving the former South stage a completely new look. 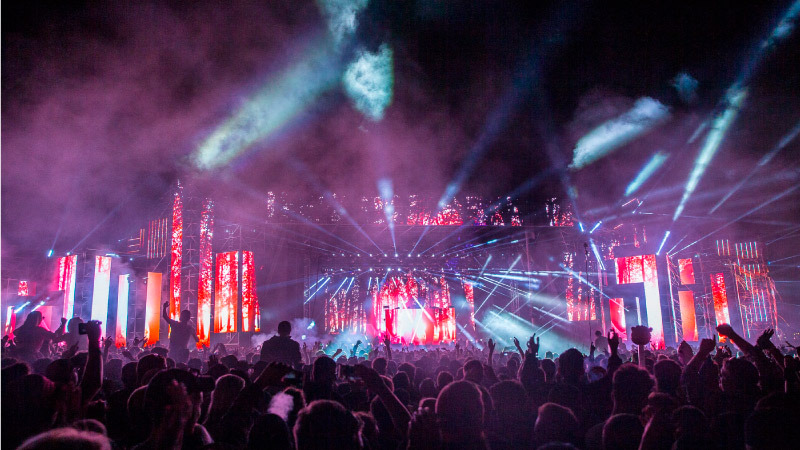 For the Arc stage Willis’ team, led by Chris ‘Karrit’ Harris and Cleveland Brown, installed a truss system suitable for the opening show headliners Alesso. That system then formed the mothergrid for the second day’s headliner, Axwell /\ Ingrosso’s 28 Kinesys hoists, and was then used for Calvin Harris on the final night with the addition of touring animation.

A similar design was installed on the Horizon stage, with the team led by Stav Hanks and Kim Klusters, and that allowed them to efficiently change Avicii’s design into Tiesto’s overnight.

Willis explains: “By producing individual, accurate show artist plots, that allowed us to keep overnight changes to a minimum and costs down. We used the first rig as the mothergrid for the following nights’ headliners, which included hanging the Kinesys system from for Axwell /\ Ingrosso’s set on Saturday, which was operated by Pete MacDonald.” 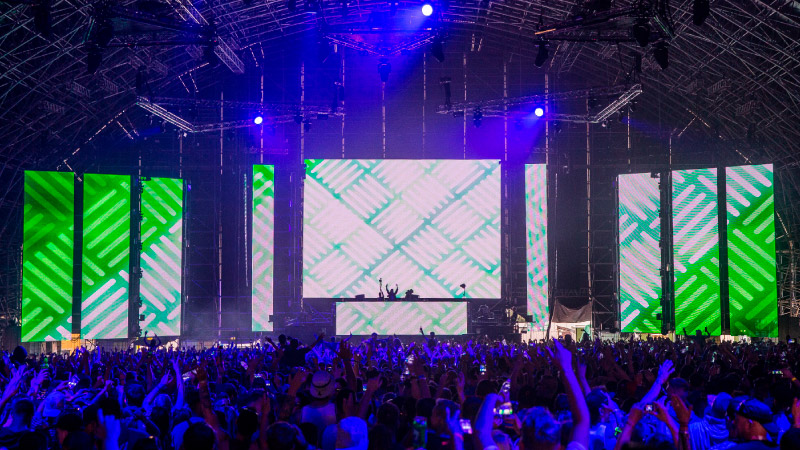 “With PRG XL Video supplying rigging on two of the stages, and working alongside our own lighting and video teams, this really enabled us to plan ahead and work out a lot of the potential on-site issues in the design stages. That meant we could create an efficient plot which kept the on-site work to manageable levels.”

PRG XL Account Manager Gordon Torrington oversaw the lighting side of the project. He worked closely with LarMac Live to deliver Creamfields’ brief for the lighting on the Arc and Horizon stages. The festival’s aim is to deliver the lighting requirements as specified in each artists rider, which enables them to create a unique look for each of their sets.

On the Arc stage Torrington worked with Front of House Operator, Chris Scott, and Lighting Crew Chief, Aidan MaCabe, to specific the lighting for the giant curved wings, creating a look which would complement the artists’ onstage lighting setups.

For the Horizon stage the lighting design was led by the artists’ requirements, and Torrington worked with Crew Chief, Luke Jackson, and Front of House Operator, Adam Power, to make sure their designs were delivered. The design for the Horizon stage utilised 100 of PRG XL’s powerful Icon Beam fixtures, ideal for an event of this size and scope.

The team also supplied a WYSIWYG suite on site at the festival, allowing the artists’ lighting designers to test and refine their set-ups before the live sets. 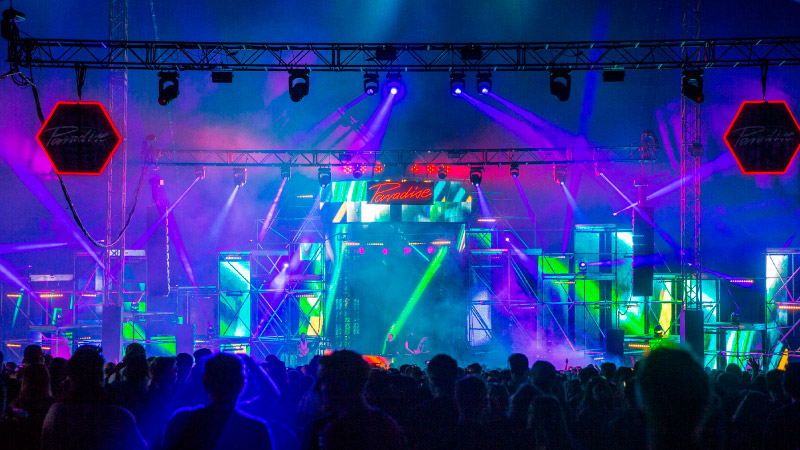 The largest element of PRG XL Video’s contribution to the Creamfields event was video, with LED screens of all shapes and sizes used across eight stages. This is the sixth year PRG XL has supplied video to Creamfields, working with the team at LarMac Live to satisfy the ever-more impressive designs each year.

PRG XL Video’s Account Managers Paul ‘Macca’ McCauley and Jay Mobbs-Beal oversaw the video requirements across the stages, working to specify thousands of square metres of LED, media servers, and screen management systems, which filled 13 trucks with video technology. Macca and Jay were supported on site by video Project Manager, Ian Jones, who was instrumental in ensuring all the video elements worked to the event’s high specification.

With 250 artists and VJs appearing across the weekend one huge consideration was ensuring that their video content was correctly formatted for the wide variety of screen sizes and orientations. Onsite, a team led by Stuart Merser was on-hand to assist the artists and VJs with their content, getting it fully working with the Resolume media servers used across the Creamfields stages.

To help artists prepare for the show, PRG XL Video’s Erica Frost created Resolume output maps which were sent out before the event alongside standard pixel and content maps. These allowed artists VJs to build their content specifically for the unique Creamfields video layouts. 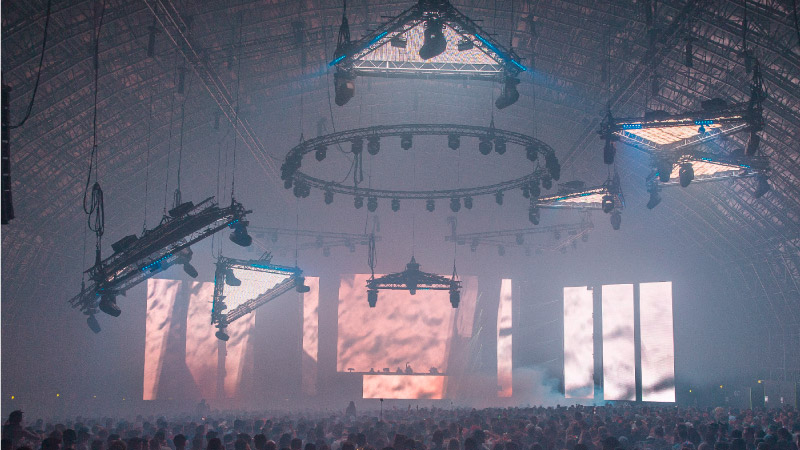 Creamfields continues to grow each year, regularly winning the Best Dance Event category at the Festival Awards. With this in mind, the two main stages had new designs for 2016.

The Arc stage used columns of LED on either side of the stage to create the curved arena, as well as using LED for headers, backdrops, risers and DJ booths. Video Crew Chief for stage CF1 was Stevie Marr.

On CF2 – Horizon, the new design used multi-facetted towers to create an effect much like a small city built from LED. Horizon was looked after by Crew Chief Al Bolland across the weekend.

In CF3 – Mega Arena – the largest of the tent stages a multi-layered effect was created with LED backdrops, risers, DJ booths, and even tent poles clad in LED.

For the Steel Yard – CF04 LED triangles were flown above the crowd on a Kinesys system which enabled the shapes to move and tilt. The 3-metre high stage was clad with LED at the front and paired with a 12-metre wide backdrop, both of which were covered with ROE MC-12 LED. The stage was flanked by four columns each side built from the innovative ROE MC-18 Hybrid LED. The design of the Steel Yard was a new idea from Creamfields, and is set to be used for an upcoming show in Liverpool later this year. 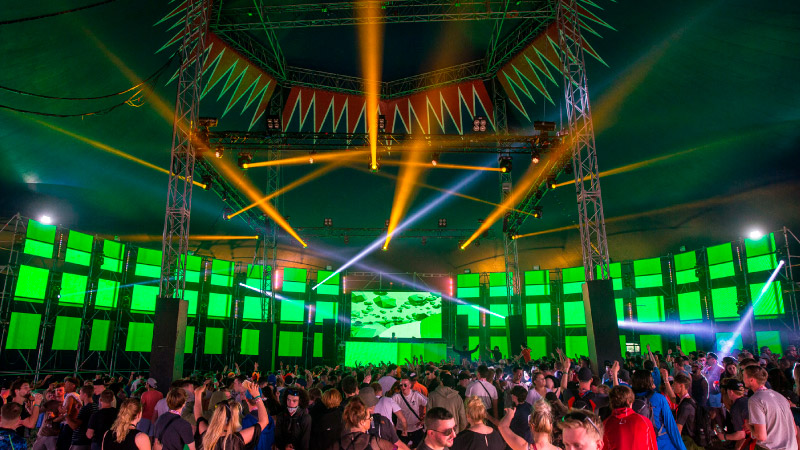 Stages CF5, the Curve arena, was created using multiple square LED screens to build a curve, reminiscent of stacks of TV screens, whilst CF 6 used LED towers, risers and backdrop. Stages CF7 and CF8 both used LED for backdrops, risers and DJ booths. In CF07 Ants used additional LED from PRG XL Video to further enhance the show. This included additional ROE MC-7 which was used in pre-fabricated blocks for their production.

In total well over 17 million LED video pixels were seen by the audiences across the weekend festival, formed into a variety of different shaped and sized screens. 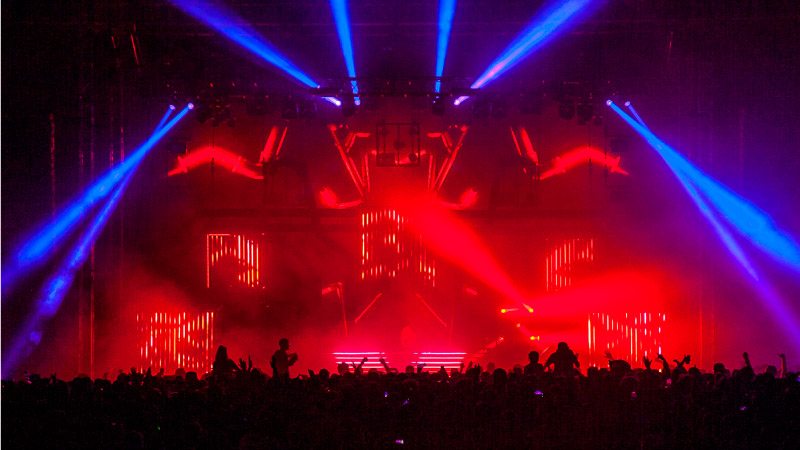 PRG XL Video’s Paul McCauley comments: “Creamfields is one of the more challenging festivals we work on each year – purely because of the amount of equipment we ship to site. I was particularly impressed with the design of the Steel Yard structure as vastly improved the amount of weight loading compared to a traditional festival tent.

“The team from Creamfields and producers, LarMac Live, strive to make the show bigger and more impressive every year, and we’re very proud to have played a part in helping the festival grow over the six years we’ve been supplying video to them! The new designs this year gave the event a fresh new look, and we can’t wait to see what they do next year.

“I’d like to say a massive thanks to all of our video, lighting and rigging crews who worked together with all the on-site suppliers to deliver the most successful Creamfields yet and we look forward to building on that next year!” 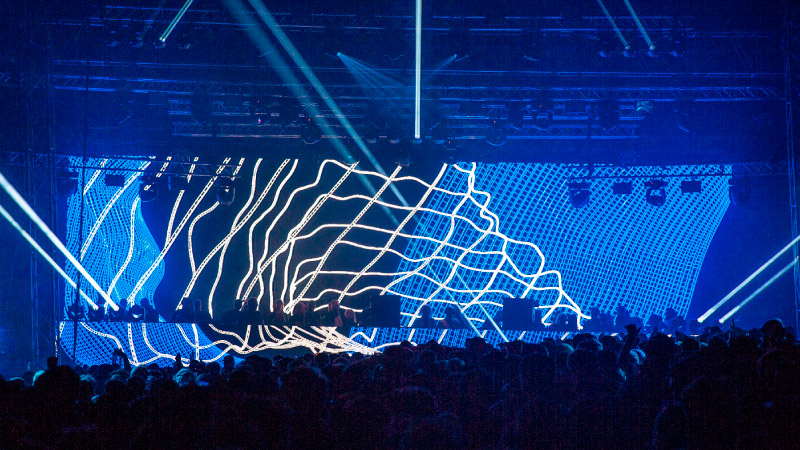