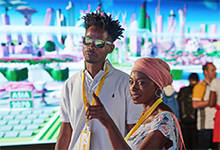 For the third year running, PRG has worked with Imagination to supply lighting, rigging and video technology at Make the Future Live London 2018 for Shell.

The festival of ideas and innovation took place over four days in July at the Queen Elizabeth Olympic Park - and was completely free for over 15,000 visitors. At the event, visitors enjoyed live music from Lemar, as well as family-friendly activities including science shows, street food and hands-on interactive gaming.

An Intelligence Squared Podcast was chaired by Alexander Armstrong, and visitors could immerse themselves in the latest immersive experiences using cutting edge technology. The event also hosted the Shell Eco-marathon Mileage Challenge and Drivers World Championships, where student teams and vehicles competed in one of the world’s greatest ultra-energy-efficient challenges.

PRG were contracted to provide rigging and lighting services for the event. Tasked with managing this year’s camera and control from video, we provided cameras, wireless cameras and control. From our team Dana Read took the lead on lighting and video was managed by Anthony Lear. Rich Pow worked on video and Cameron Bannister looked after lighting and rigging.

Lighting included the supply of daylight pars to the two exhibition areas based on the designers specification, and appropriate rigging to support. Additionally, PRG provided a lighting package for the main stage. Based on Sunstrips and GLP moving heads, the lighting created a cost effective solution to make the stage pop in a primarily daylight environment.

We were also tasked with providing a cost effective solution for creating an immersive entrance tunnel experience for the exhibition space. Our solution was to use the Barco MiStrip scenic LED product, to build a dynamic video surface that we were able to extend through the 24 metre tunnel to provide a custom build feel using the cost efficiencies of a rental product. We were also then able to extend the products used to create animated directional signage that reflected the feel of the tunnel environment.

We overcame a fair few challenges in the setup. Our rigging team were tasked with dead hanging all of the trusses to reduce our impact on roof beams and maximising the rigging systems capacity to accommodate the designers lighting rig.

It was great to be a part of the evolution of this fantastic event for the third year running. Working alongside Imagination, we helped to create an engaging and supported environment, ensuring all energy invested in the message resonated throughout the team involved. We’re looking forward to working with the Imagination team again soon.

If you want to find out more about what PRG could do for your next event, whatever its size, we’re the people to talk to. Contact John Montague or Andy Johnston.