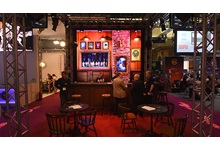 The 38th ABTT Theatre Show took place at Alexandra Palace on 22nd & 23rd June. PRG XL Video had a multi-facetted presence at the event and spent two highly productive days meeting and catching up with clients, colleagues and industry peers.

Head of theatre lighting for PRG XL Video in the UK, Account Director, Peter Marshall explained our contribution, “Both PRG and XL Video had been involved with the ABTT Theatre Show for many years and we were delighted to be exhibiting together for the first time as an integrated company and as platinum members of the ABTT Industry Support Group. For this year’s show we were keen to honour our extended commitment to the ABTT and UK theatre industry by contributing more than we have in previous years. We had been having internal discussions about suggesting a seminar space when David Mayo and Isobel Hatton approached us with their idea for the Petrus Bertschinger Studio (PBS) as a collaborative performance space to showcase theatre technology products and practices to show attendees. We appointed John Harris to design the show space, and worked alongside Production Manager, Ned Lay, with Ambersphere and ETC supplying lighting and rigging. Autograph and D&B Audiotechnik contributed to the sound element of the space, whilst Drapemakers did an excellent job with the drapes.”

PRG XL Video provided a seven by seven metre ground support for the PBS, raised to a height of five metres, as well as the power and data infrastructure. ETC supplied some Coloursource par and spot LED lights in addition to the sensational Source 4 Lustr fixtures which served as key lights. Ambersphere contributed a selection of Clay Paky’s popular theatre lighting fixtures, including Scenius Spots, Alpha Profiles and the award winning A.leda B-EYE K20 LED wash and visual effects light. Also on show were the new Robert Juliat Dalis LED battens which provided a solid wash on the white background. Operator Lawrence Stromski used a GrandMA2 supplied by Ambersphere.

David Mayo, General Manager of the ABTT Theatre Show commented: “It was great to be able to recognise the work of our colleague Petrus Bertschinger in the form of the new pop up studio theatre. PRG XL Video were instrumental in getting the idea off the ground. The commitment shown by Pete Marshall was quickly supported by other exhibitors and in no time at all, we had a full performance facility. The reaction of both visitors and exhibitors was extremely positive and this is a concept we will be progressing next year. To enable exhibitors to demonstrate capability in a live performance environment is a very positive way forward for the ABTT Theatre Show, which has shown consistent and sustainable growth over the past three years.”

Lighting the PBS allowed PRG XL Video to show the PRG GroundControl™ Followspot System to the UK theatre industry in a live show situation. Throughout both days there were stage performances by Bird College of Dance, which provided the opportunity to demonstrate the GroundControl to prospective clients. The GroundControl was entered for the ABTT Lighting Product of the Year award. Although the product narrowly missed out to the GLP Impression X4 Bar 20 LED Batten, the judges gave the remote followspot system a special mention, noting: “Made for the theatre industry, the PRG GroundControl removes follow-spotters from elevated positions whilst still achieving the optimum rigging height for the light.”

Head of theatre video for PRG XL Video in the UK, Account Director, Gareth Jeanne discussed the concept and technology behind the team’s exhibition stand, The Magic Lantern: “Video is playing a bigger and bigger part in theatre productions, so we wanted it to play a key role on our exhibition stand too. The brief for PRG XL Video stands at the ABTT Theatre Show have always been to be an informal, welcoming space for our industry friends to come and catch-up in. Considering we regularly feature a complimentary bar in our show space, we had the idea to theme this year’s stand as a traditional British pub, which resulted in our creation of The Magic Lantern. We brought in some fantastic furniture from Event Prop Hire, and selected a ROE Visual 3.47mm Black OnyX LED screen as a backdrop/digital scenery. Thomas Kother created our video content, offering several options from the regular wood and exposed brick surfaces of The Magic Lantern to a tropical beach bar. Although the background was a static image, we used a picture in picture method to display footage of current theatre shows we support in a picture frame behind the bar. We used six Samsung ME46B displays, mounted back to back and hung as pub signs, which did an amazing job of letting people know where we were. The content to all playback surfaces was driven through a Catalyst media server.”

The five by five metre show space was filled with a ground support raised to a height of four metres. Lighting Designer John Harris specified which lighting products were used on the stand: “We went with a clean and simple look, without overcrowding the space with technology. The only lighting products we used were ten GLP X4S LED wash lights and seven ETC Source 4s with PRG XL Video gobos projected onto the three walkways either side of the stand.” The Theatre Show was held at the Alexandra Palace for the second consecutive year. In addition to supplying the Petrus Bertschinger Studio and our exhibition stand, PRG XL Video also sponsored the lanyards handed out to attendees when collecting their passes, and the drinks reception prior to the ABTT awards on the Wednesday evening. Robin Townley, Chief Executive of the ABTT, commented, “It is particularly good to see a major industry player like PRG XL Video taking their place at the show. For an operation that straddles so many diverse elements of the theatre, live performance and events sector, it is really pleasing to see PRG XL Video placing value on their attendance at the ABTT Theatre Show and recognising the unique opportunities it provides to talk, not only to major collaborators in theatre and live performance production but also to new talent coming up through the industry. The PRG stand was all about conversations, providing the surroundings of a good comfy pub as its setting. To have the likes of PRG XL cheek by jowl with such a diverse range of suppliers all united by their support of performance, goes a long way to ensuring the ABTT Theatre Show has a unique flavour and works as a one stop shop for exhibitors and visitors alike.”

Gareth Jeanne added: “The real benefit of exhibiting at ABTT this year was being able to catch up with people in a suitable environment. We had a fantastic response to what we achieved on the stand and were delighted to be able to contribute to the PBS.”

Peter Marshall concluded, “Another successful ABTT show is done and dusted. It was a great privilege to have had an increased involvement in this year’s event. The PBS demo room is a marvellous idea which adds another dimension to the show, and we’re keen to work with the ABTT to learn from what we did this year and collaborate with other industry suppliers to bring an even greater performance space to the show for next year. Thank you to everybody who came to see us on the stand and in the PBS, and an enormous thank you to all the riggers, technicians and product specialists who brought our vision to life at this year’s ABTT Theatre Show.”