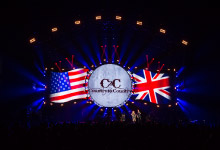 Since 2013, an array of country music’s biggest stars have been visiting the UK and Ireland as part of C2C: Country to Country, a festival of country music devised by AEG (The O2) and SJM Concerts in collaboration with the Country Music Association.

The show began at The O2 in London, and has since added shows in Glasgow and Dublin, as well as visiting Scandinavia in 2015 and 2016.

Show and lighting designer, Mike Oates and his partner Ryan Hopkins have worked with the festival since it began. For the 2017 festival at The O2 they created a sophisticated design featuring shaped video screens, curved trusses, and a bright versatile lighting package. 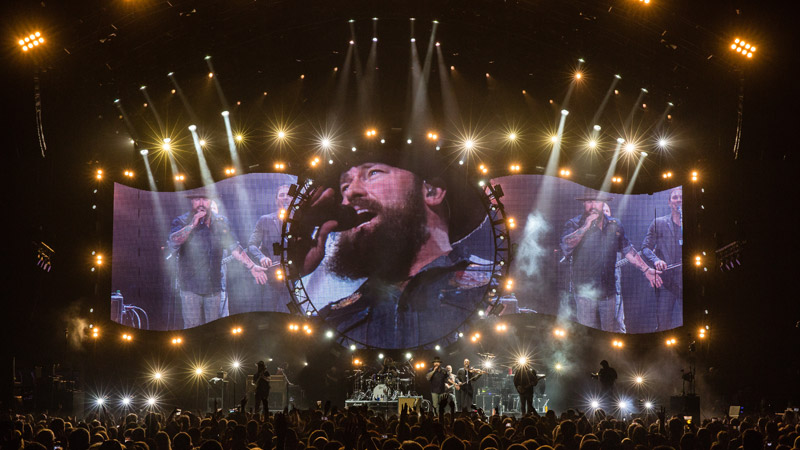 Mike comments: “The design comes together after a series of meetings with Ross Hanley from SJM Concerts. Ross has ideas of what they would like to include in the design and look of the event, and we then go away and develop those ideas into several options.

“It’s great working with a client who wants to be actively involved in the design of look of the show. SJM want to offer the customers a fresh look every time. It’s so easy to do four straight trusses and a slab of LED upstage, but I think offering a unique look to a festival makes it more exciting for not just the audience but the incoming lighting designers and video directors.” 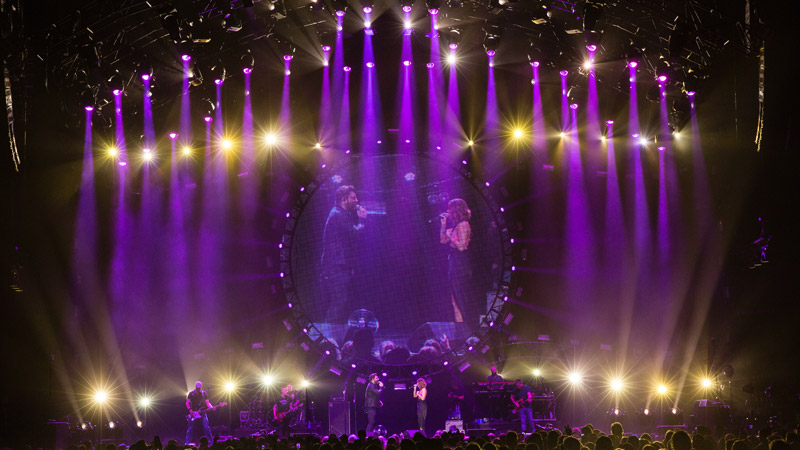 To form the basis of the design, PRG XL Video supplied both the house rigging at The O2 as well as the production rigging. Additionally the company provided rigging in the main entrance foyer of the venue for two huge 15-metre drop banners. This was overseen by Account Manager, Ade Stead, with Jay Call as the Crew Chief for the production rigging onsite. The rigging design incorporated a series of curves with the flown rig using hinged sections to build the curves.

PRG XL Video’s Senior Account Manager, Paul McCauley worked with Mike Oates to supply the video set-up for the show. On stage a vertically flown 8m diameter circular truss masked the centre section of the upstage LED screen, and circular and straight trussing sections were combined to create flag shapes on either side of the centre circle, creating a distinctive look for the show which mimicked the C2C logo. Mike explained: “We had been playing around with different looks involving the logo for some time. We’re really pleased with the result."

Behind the shaped truss a 20 metre wide x 7 metre high LED screen, masked to fit the shaped truss, displayed a combination of the performers own content, and IMAG. To provide the IMAG footage, PRG XL supplied a Grass Valley Karrera-based PPU, and eight camera package. Two Sony HXC-100s were positioned at front of house, two were on dollies for the pit and B-stage. Two robo-cams and two HDiye minicams onstage completed the package and provided close-ups of the performers.

The masked screen set up was produced using a Barco e2 system paired with Barco’s EC200 controller, programmed by PRG XL’s in-house media server technician Erica Frost. As part of the service to each of the visiting performers who brought their own content, Erica was able to format their content on site to fit the specially shaped screen. 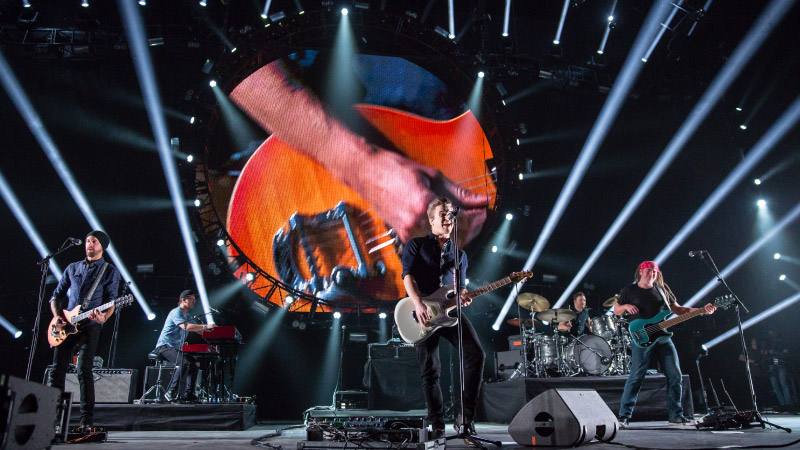 PRG XL’s Account Manager, Gordon Torrington worked with Mike Oates design to fulfill the lighting specification. A variety of lighting fixtures were flown from the main rig as well as arranged around the shaped screen. Mike Oates chose to use the new Icon EDGE around the flag sections of the screen. He comments: “I was really impressed with the Icon BEAM last year, so I was more than happy to use the new Icon EDGE this year, which I must say is a brilliant light.”

Martin Atomic strobes and GLP impression X4S fixtures were flown around the circle at the centre of the screen, and the main overhead rig featured PRG Best Boy HP Spots, VL 3500 washes, and blinders to light up the audience. Luke Jackson was lighting crew chief for the festival, supported by Will Gallegos, and Matt Morris. There was a total of seven crew working over the weekend. Jon Trincas used a GrandMA2 fullsize to operate the show.

The PRG team set up a WYSIWYG suite on site which allowed LDs to prepare and customise their designs as they arrived. Mike explains: “We have four mainstage artists per day. All of which would arrive at the O2 10.00 hrs overnight from C2C Glasgow. With the WYSIWYG we could offer LDs sufficient preparation time both in reality and virtual world.”

A secondary B stage was added to the design, and Mike explains the benefits of using two stages for the festival: “The B stage is to bring the action more to the D end of the arena. Being sat in the gods at The O2 you are so far away, so the B stage brings those audience members much closer to the action. It also allows us to run acts back to back whilst giving the A stage team time to turn around artists.”

To give the audience around the huge arena a close-up view of the artists, IMAG projection screens were used; one screen either side of the main stage, and a further screen above the B stage.

Mike Oates sums up: “A key part of realising our design was the synergy with which the PRG XL Video lighting, rigging and video teams worked. They really pulled together to make it all happen.”

Gordon Torrington comments: “It was great working with Mike and Ryan, and with Ross Hanley of SJM Concerts. The C2C show at The O2 grows every year, and is hugely popular. The design for this year’s show was the best yet, and the capacity audiences had a real visual treat to accompany the music from some of Country’s biggest artists.” 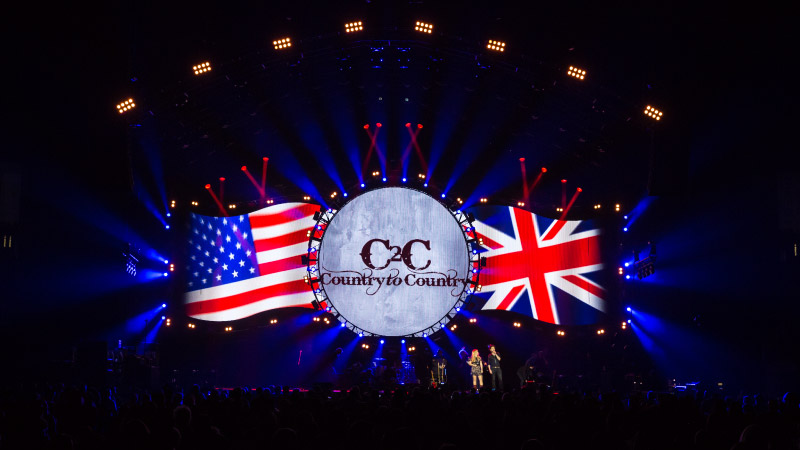