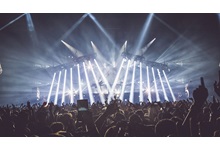 Disclosure, the sibling electronic music duo from Surrey, UK, continue to work hard as they take their Caracal tour around the world. The Disclosure show returned to the UK last month, when the band headlined the Reading and Leeds festivals, before heading off to South America. Show and Lighting Designer Will Potts has been with them every step of the way as the tour stopped off at venues and festivals in North and South America, Japan, Australia, Korea, mainland Europe and the UK. PRG XL Video’s lighting Account Manager Roy Hunt and video Account Manager Paul McCauley take care of the band’s event technology needs as they stride around the world, performing sell-out shows and whipping audiences into a Disclosure frenzy.

We caught up with double Knight of Illumination winner Will Potts when Disclosure played three sought-after nights at London’s Alexandra Palace at the end of last year. The short UK tour, which stopped off in Glasgow, Manchester and London was the first time our new Vanish, high transparency LED screen had been used. There are lots of products on the market which have a reasonably high-transparency, but Will was after a product which became invisible when switched off, yet still had a decent resolution and was very bright. In the summer of 2015, Will organised a demo with co-designers Okulus (James Scott and Louis Oliver), during which they tested the beta version of Vanish screen against similar products alongside the Robe BMFL, Aytron Magic Blade and some profile lights to select which high-transparency LED screen he’d like to use on upcoming Disclosure shows. 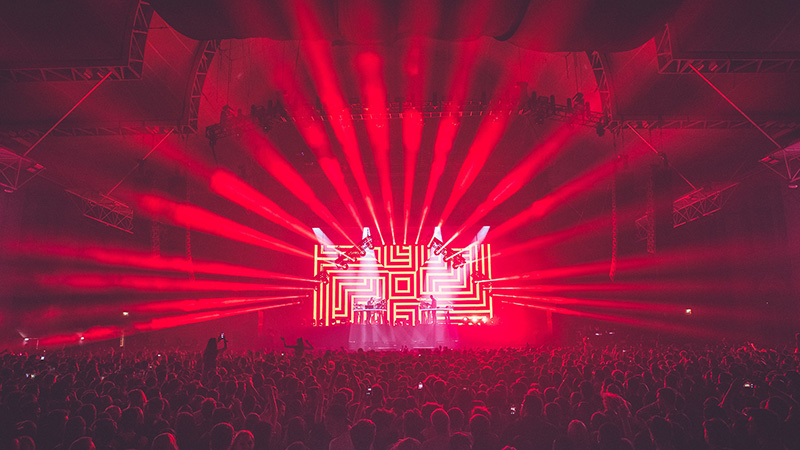 Behind the upstage 22.8mx6M Vanish screen sat 2 trusses, fitted out with 32 PRG Best Boy HP spots and 32 Martin Atomic strobes to blow through the screen. Will is a huge fan of both products: “The Best Boy is an exceptional product, now they’ve been upgraded to high power output with the 1500W lamp and overdriven to 1640W, they are the perfect product to use for the blow-through effect which penetrates the Vanish panels. The Atomic strobe is a complete workhorse—no matter how many strobes I’ve seen, you’ll never beat the Atomic strobe for that look of pure electricity.”

Although the Vanish screen was the main feature of the video design for the show, there was plenty more LED on and around the stage. Two 6x3.6M ROE MC-18 side screens displayed image magnification, with footage being provided by four of our Sony HXC-100 cameras. Curved around the riser from where Howard and Guy were performing was 7.2x1.2M strips of ROE MC-7; above the performance area was a further strip of ROE MC-7 LED screen, referred to as the Venetian, which pivoted down into view at certain points during the show. All video content was run through two d3 4x4 pro media servers—specified and programmed by Icarus Wilson-Wright. 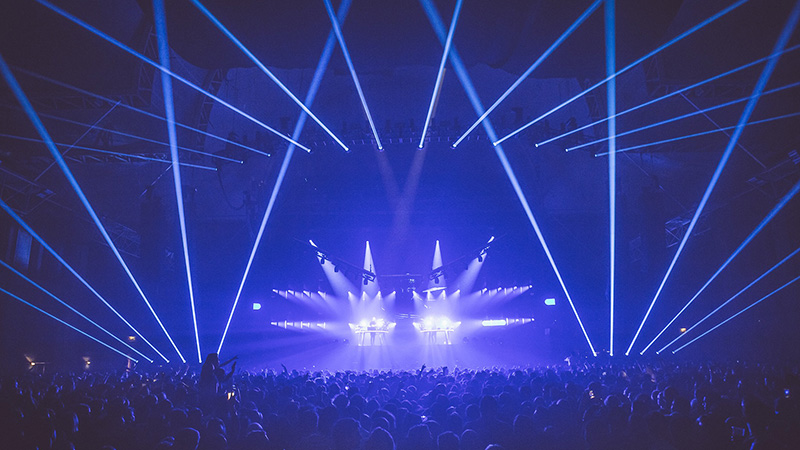 Discussing other elements of the design, Will explained: “Mid-stage we have the Mythos trusses, which are basically a long truss split into 5 independent and automated sections which are choreographed tightly with the video through the show. I’ve always wanted to work some automation into the Disclosure show and for the summer festivals we managed to use three moving trusses, now we’re in arenas, it’s five.” Each section of the truss is loaded with four Clay Paky Mythos moving lights and seven Philips Nitro 510C LED strobes. “The Mythos is perfect for a show like this, they’re so flexible and versatile you can create plenty of contrasting looks with them. They have lots of sparkle when you need it and a really nice beam to cut through a high power LED screen. The Nitros accentuate the line from the the Mythos trusses and we use them a lot when they are moving around to create drama. One of the great things about Nitro is that you can butt them up next to one another to make a single, seamless batten which I haven’t found in any other high power LED strobe.”

Will’s an agile designer who has both creative and technical prowess in abundance, watching his incredible work with Disclosure, it is evident their style of music is very close to Will’s heart. His efforts are not simply the result of a paid obligation, but the product of a deeper interest and passion. Will told me: “I’ve always been passionate about music and its representation in live performance. I’ve been with Disclosure for all of their shows so this particular show is close to heart.” 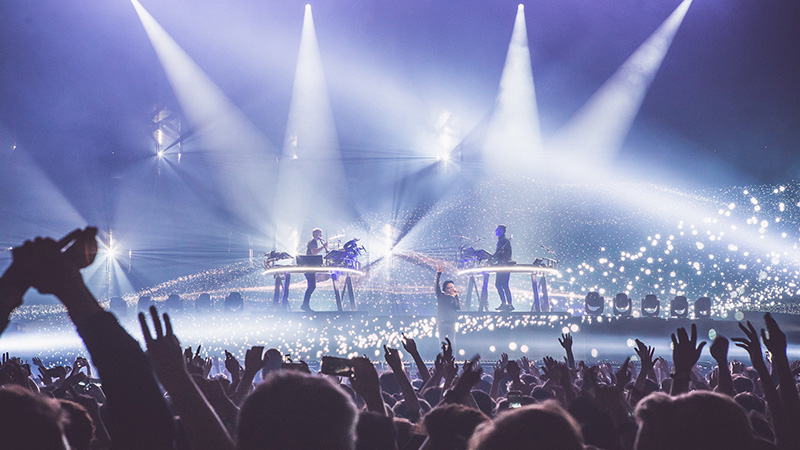 Roy Hunt commented: “Working with Will is a real pleasure, he always comes to me with a precise vision of what he wants to achieve—then we work together to realise the design he’s come up with. Some of the ideas Will has are so exciting to be part of, he continually pushes the boundaries of what is and isn’t possible with the technology available to us. His attention to detail is second to none and that’s visible when you watch one of his shows, so much work goes in in the background, but the result is a seamless, awe-inspiring light show which Will makes look effortless.”

Will programmed the show with James Scott and runs it from a GrandMa2 lighting console. When asked about the merits of using timecode over manually operating a live show, Will said: “With the new Disclosure show, running things live and hands on was never a viable option as there are just too many cues for one set of hands. The boys on stage, as well as the rest of the visual crew need this consistency on these big shows so they can concentrate on their parts – especially with screens, trusses and hydraulic lifts moving around. The whole show is programmed to timecode which makes running the show very simple, allowing me to oversee and tweak as necessary. There is one song I operate manually, which is during a section in the show where the boys go off on a tangent away from the set list. It’s nice to manually operate once in a while,” Will smiles.

There are few other lighting designers who show the same level of commitment and dedication that Will does to Disclosure. He told me his first show with the band was at Manchester’s Academy 2 back in March 2013, since then he’s designed, directed and operated the lights and video for every Disclosure show around the world, with the exception of two or three dates. Will explained: “Physically touring the show is part of developing the design, it’s here we learn what does and doesn’t work both visually, musically and technically so you have to be there and be part of it initially. I wouldn’t tour for the length of every campaign, but with these guys it’s a pleasure to be part of each show.” 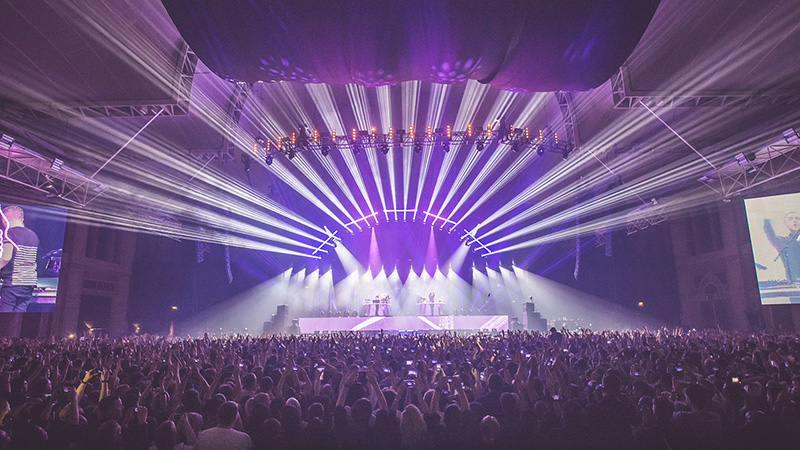