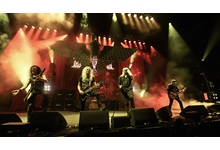 The 2016 Metal Hammer Golden God awards took place at the Eventim Apollo in Hammersmith on 13th June, and PRG XL Video was delighted to supply lighting, video and rigging technology as well as sponsoring the best live band category.

To celebrate the 30th anniversary of Metal Hammer magazine; parent company, TeamRock, moved the event to a larger venue and planned to pull out all the stops with an action-packed, jaw-dropping show. Lighting designer Steve Abbiss was appointed by PRG XL Video account director Andrew Strachan, who took care of the lighting and rigging needs of the show. Abbiss explained, “Although the Golden Gods is billed as an awards show, it’s actually a gig with four different bands playing and a bit of talking in between. It’s a bit like doing a festival main stage, in that you have to come up with an all encompassing rig that gives a bit of something to each act for them to feel it’s theirs. The general brief came from a base rider from each band and the front cover to Motorhead’s ‘No Sleep ‘till Hammersmith’ vinyl; the outcome was basically a blend of each plot. There were some additions on the day which took the form of dragons and tombstones for Amon Amarth and the truly glorious Saxon eagle. For those bands which were playing and brought their own operator/designer, I programmed their own pages for them to play around with, although we had some pretty tight time constraints, I think everybody was happy with the end results.” 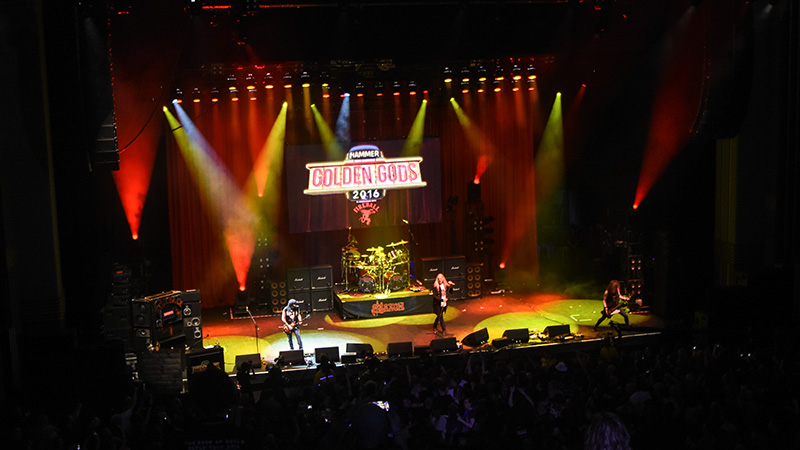 Abbiss explained his choice of lighting products, “The brief was very clear: to create a classic rock look, straight out of the 80s, I wanted to replicate the use of par cans with the classic look of rows of six, but still be able to manipulate the colours, Vari*Lite VL5s were the ideal choice and I’m really happy with how they looked. I added in some ACL fans to complete the rock look. PRG Best Boys gave great spot coverage and the VL1000s worked brilliantly as front key lights. We had some SGM P5s on the floor which provided a nice, wide angled glow when needed. I used the Chauvet Strike 4 LED blinders on truss towers on the stage and when the correct dimmer option was selected they matched their tungsten counterparts in the air perfectly.” Abbiss specified an Avolites Sapphire Touch as his console, and used PRG node plusses to distribute DMX.

This year’s Golden God awards were presented by Hatebreed’s Jamey Jasta and featured performances by the theatrical Amon Amarth, Grammy award winners Halestorm, and French metal innovators Gojira. The evening was peppered with tributes to Lemmy who passed away at the end of December and tokens of recognition for the immense contribution he made to rock and metal music were powerful and frequent. Closing the show was a ‘Salute to Lemmy’, British rockers Saxon were joined on stage by Motorhead’s guitarist Phil Campbell and drummer Mikkey Dee for a high-octane finale featuring Motorhead classics ‘Ace of Spades’, ‘Born to Raise Hell’ and ‘Overkill’. 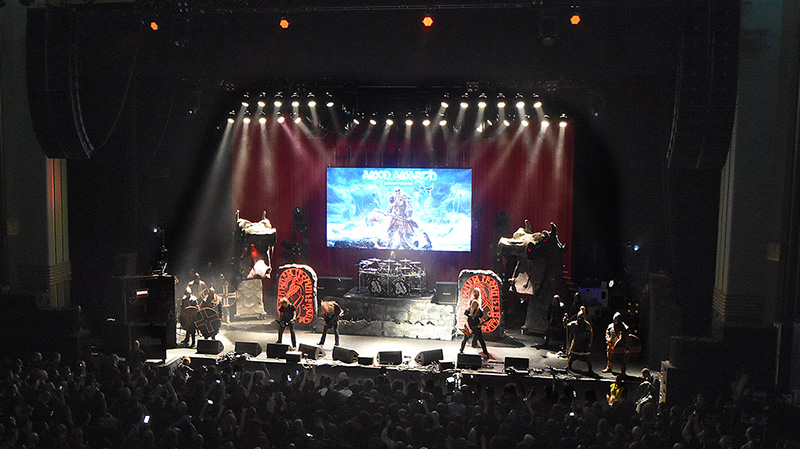 PRG XL Video also supplied a 5.4M x 3M 7mm LED wall, fed by Playback Pro running on a MacBook. Account Director Stefaan Michels commented, “We did the Golden Gods last year at Indigo in the O2, where we used projection. Going into a bigger venue with more ambient light we needed an alternative solution which would be sharp and punchy. The ROE 7mm screen is perfect for this kind of show, it’s really bright and the resolution always exceeds expectations.”

2016 was the second year PRG XL Video have been sponsors of the Golden Gods and continuing our close relationship with TeamRock. Alexander Milas, Executive Director of TeamRock said, “Moving the Metal Hammer Golden God awards to the Eventim Apollo, aka Hammersmith, was no easy task—one of the most historic and iconic venues in rock and metal just can’t look anything but superb, but PRG XL Video helped us make our 2016 event look genuinely spectacular. Their team were creative and helpful at every step and I couldn’t recommend the highly enough.” Congratulations to all the winners, including Lamb of God, who won the best live band award sponsored by PRG XL Video.