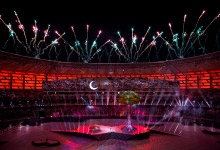 The Islamic Solidarity Games is an event which involves elite athletes from countries who are part of the Organisation of the Islamic Conference. Despite the names, non-Muslim citizens in the member countries are also allowed to compete. The first was held in Mecca, Saudi Arabia in 2005, with the most recent event taking place in Baku, Azerbaijan in May 2017.

PRG was selected as an official supplier for the opening and closing ceremonies, providing lighting for both large-scale events. The lighting design was created by Adam Bassett of Woodroffe Bassett Design, with associate designer, Terry Cook, who worked with PRG Account Director, Yvonne Donnelly Smith, and Head of Event Services, Richard Gorrod to specify the lighting requirements of the huge visual production. 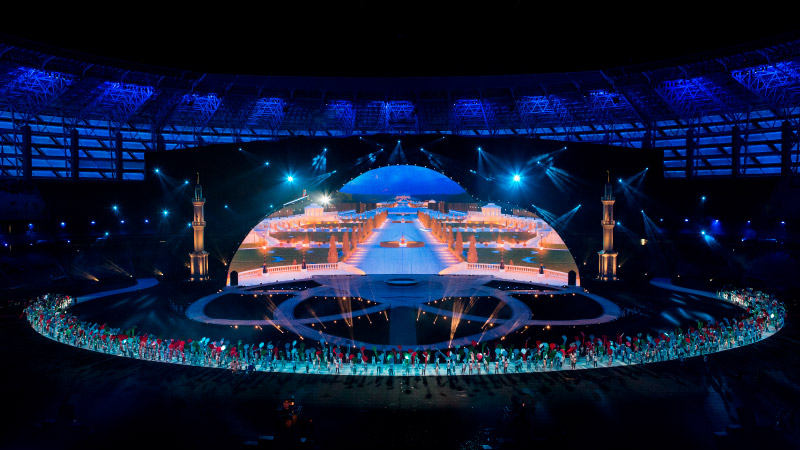 The design in the Baku National Stadium made use of all levels of the stadium for lighting, as well as the stage built in the centre of the athletics track.

PRG used a combination of its own PRG Bad Boy, VariLite VL35kw, and SGM P5 15 fixtures around the roof trusses, of which there were 30 in total. At balcony-rail level high brightness Icon Edge and VL35k wash fixtures were added into the mix, creating maximum impact with beams reaching up into the sky and across the stadium. 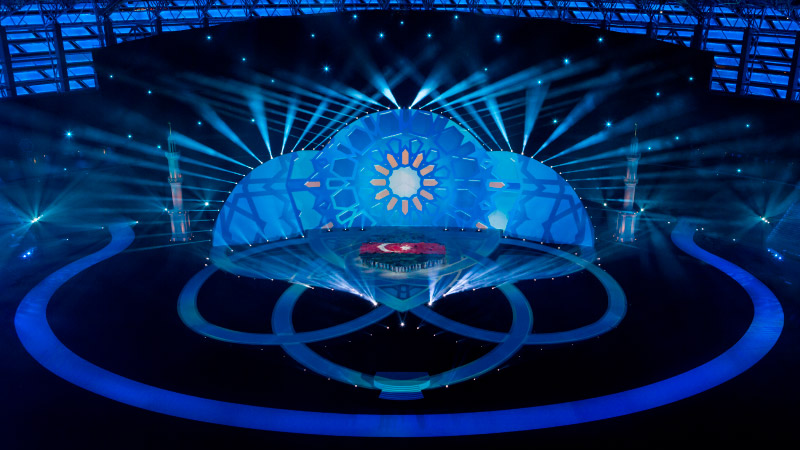 Framing the colourful projections on the main shaped rear screen, brand new ultra-bright Icon Edge units were mounted on the edge of the screen on custom T bars. Icon Edge and Icon Beam units were also used to surround the stage floor. Philips iW Blast, and Color Blast TRX fixtures were used in the VIP Box as a quality front light, and coloured backlighting respectively. SGM P5s were used to backlight the audience on Levels 1 and 2.

Eight of PRG’s newest version of its revolutionary GroundControl™ Followspot System – the Long Throw - were used to as high level followspots mounted on separate trusses around the roof catwalk. These units are as bright as a 4k Gladiator followspot, and can be rigged on a truss, so improving safety and reducing weight by negating the need for operators in baskets. A combination of standard GroundControl Best Boy units, and M2 traditional followspots were used in the closer positions. 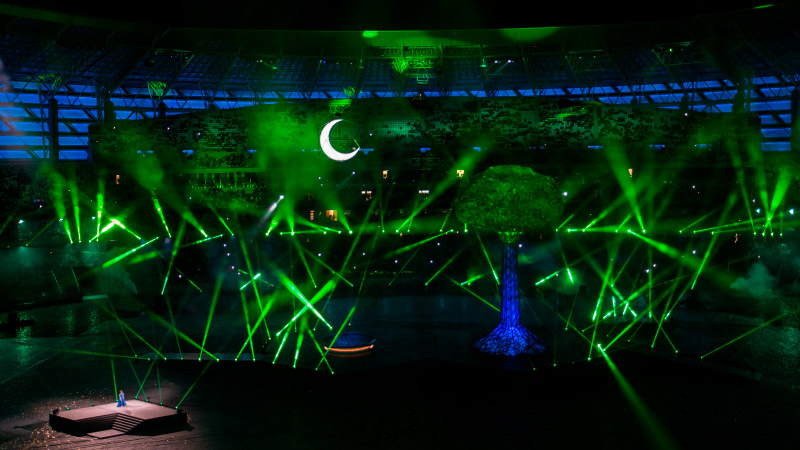 Two side light positions were populated with PRG Best Boy and Bad Boy units, and either side of the stage two architectural columns were lit up using a mixture of Floor Cans, 650kw Fresnels, and Birdies.

In total more than 1,100 lighting fixtures were used for both ceremonies. PRG Crew Chiefs Mark England and Luke Jackson led a team of highly expert technicians. Alex Passmore and Ben Hornshaw programmed the lighting on GrandMA consoles, and a WYSIWYG suite was used for pre-programming at PRG’s Longbridge location, and on-site during the build phase, and for pre-programming of the Closing Ceremony. 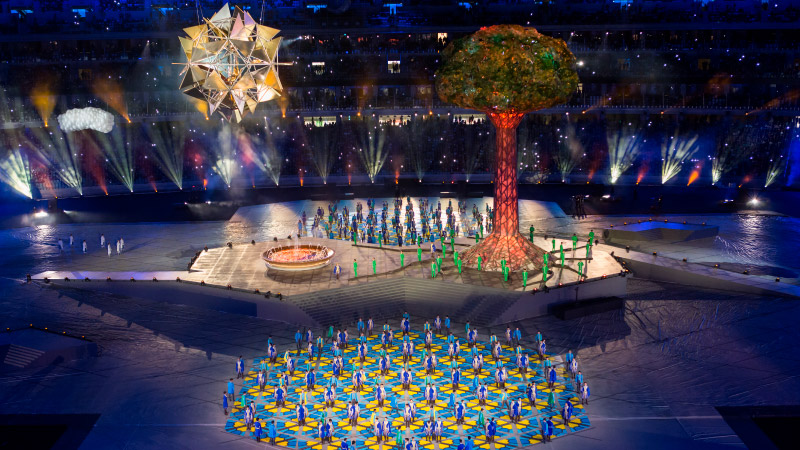 The control and networking was all managed using a S400 data distribution system with S400 fibre switches and a combination of Supernodes and Node+ units.

Richard Gorrod commented: “Our PRG Best Boys are still one of the best fixtures for a harsh stadium environment. The new Icon Edge performed brilliantly – it’s very reliable and a true work horse! The new GroundControl Long Throw followspots also performed well – they’re super bright and give you the advantage of hanging them in positions where you would not be able to site a conventional 4k followspot. The S400 system again performed brilliantly, as the glue for the whole system. Our crew were true stars – installing and maintaining the equipment on site under many different pressures.” 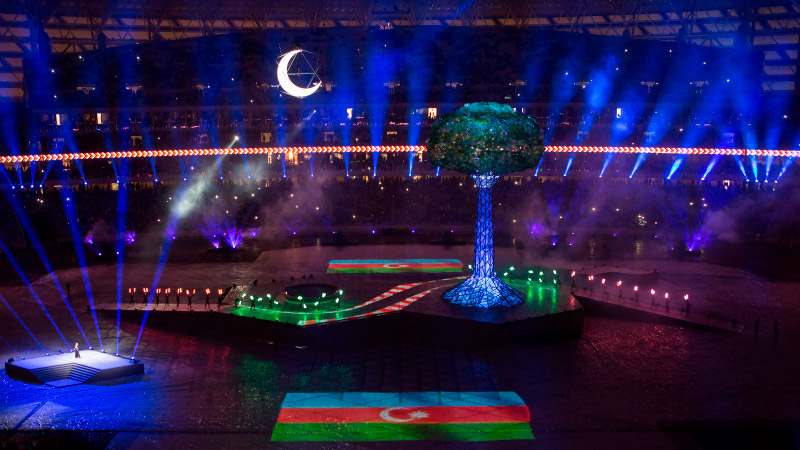 Adam Bassett commented: “Once again we were blessed with a great level of support, technical expertise and most importantly a brilliant crew. The PRG team in Baku, and behind the scenes back in the UK, were great and made a technically challenging production go very smoothly. The system lived up to every expectation and the ability to use the new GroundControl Long Throws massively changed how we were able to light the shows. By having the ability to place followspots in locations otherwise inaccessible with conventional spots, it enabled us to achieve the optimum angles and as a result protect the video projected surfaces which were so crucial.” 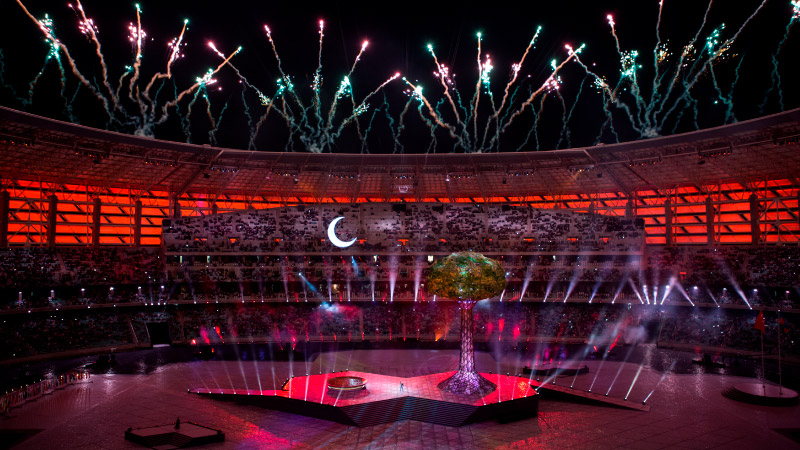