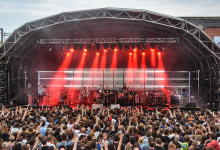 On a hot and sticky evening in early July, revellers packed pop-up central Manchester venue, the Castlefield Bowl, spilling over onto the adjacent railway viaduct and the balconies of nearby apartments—intent on witnessing the Abba-like anthemic indie rock of Arcade Fire. PRG supported Production Manager Bob O’Brien and the show designers, Moment Factory, with a versatile package of lighting and video to facilitate a thirty-two date European tour, taking in a variety of indoor and outdoor venues, as well as headline festival performances.

Lighting Designer Chris Bushell discussed the nature of the tour, and the processes between him and the other creatives on the design team: “I worked with the Creative Director, Tarik Makou from Moment Factory, as well as Video Director Icarus Wilson-Wright and the band themselves to design the look of the show. The concept we started off with was that of a contained environment, one which isn’t affected by outside influences—from which Tarik and his team at Moment Factory created the ‘smoke box’, an eleven-metre-wide, three-metre-tall transparent acrylic enclosure, filled with moving smoke and lighting and video effects.” 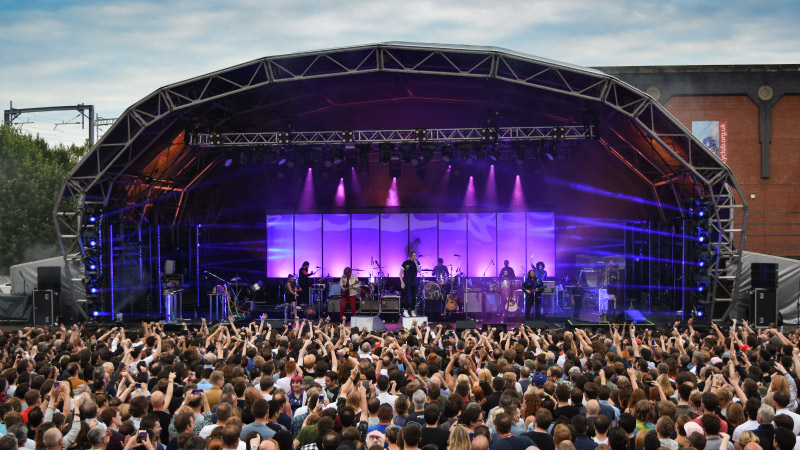 The grand, sweeping melodies of an experimental musical collective such as Arcade Fire, are well served by the experience design, which perpetually shifts the relationship between colour and space throughout the show. Chris continued: “The box contained lots of smoke machines and fans to move the smoke around. There was a selection of lighting fixtures, including Martin Mac Quantum wash LED lights on the floor at the back of the box, which worked in tandem with a lot of GLP X4 Bar 20 LED battens to give an overall wash of colour. The X4 Bar 20s also created strong, defined lines of colour through the smoke. There were four overhead trusses and two side trusses, loaded with more Mac Quantums, Clay Paky Sharpy Wash lights, Robe Robin BMFL Blade moving lights and SGM Q7 LED strobes. Additionally, there were three ten-foot truss towers on each side of the stage, rigged with Icon Beam lights and X4 Bar 20s, which scanned over the audience and were used to create a cage-like structure of light in front of the stage. 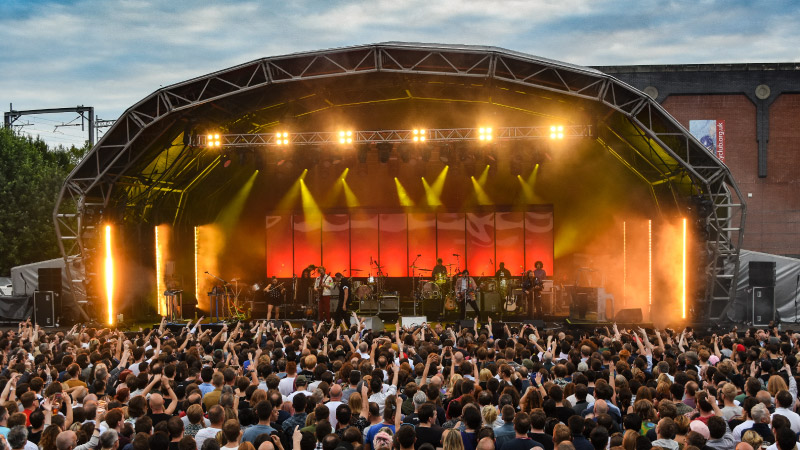 The use of video technology for the Arcade Fire tour was far from conventional, Video Director Icarus Wilson-Wright described the set-up: “The smoke box sits in front of a video screen made up of ROE Visual MC-7H LED tiles, on motion control that moved the screen from behind to above the smoke box during the show. In addition, there was a projector either side of the stage which fired laterally into the smoke box to add another dimension to the video content, rather than relying solely on the LED screen. The smoke box has inlets and outlets, which enabled us to accurately control the level of smoke from Chris Bushell’s lighting desk. The use of smoke of smoke wasn’t random, and very carefully planned out; different video looks were transitioned in and out using varying levels of smoke. Some of the content was produced to confuse the audience’s ability to distinguish between real and virtual smoke.” 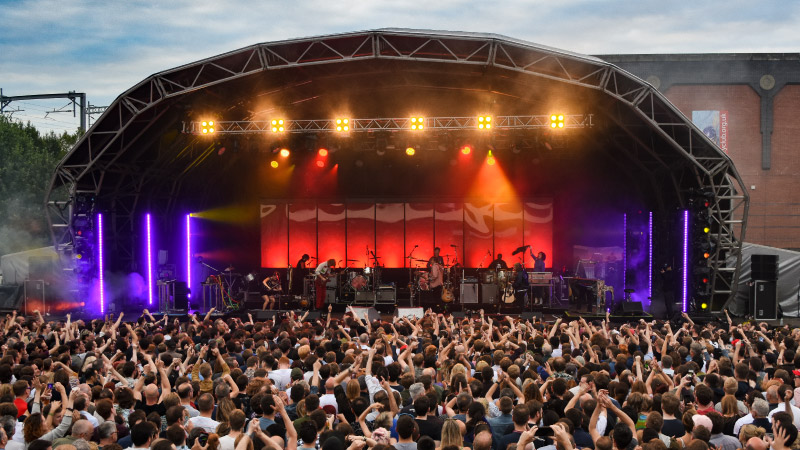 Icarus explained how he was given a brief from the band and then worked with the team at Moment Factory to bring everything together: “Arcade Fire are a really interesting band to work with, they’re arty, driven and demanding—but more than anything else they’re really, really nice people. The biggest challenge we had was the set list and song order, nothing is fixed and there would be lots of changes from night to night, with the sudden inclusion of old or new songs that require new looks. With so many people on stage swapping instruments and positions, it may look chaotic, but is well disciplined and planned out; that can’t be easy to do—so hats off to them for that!” 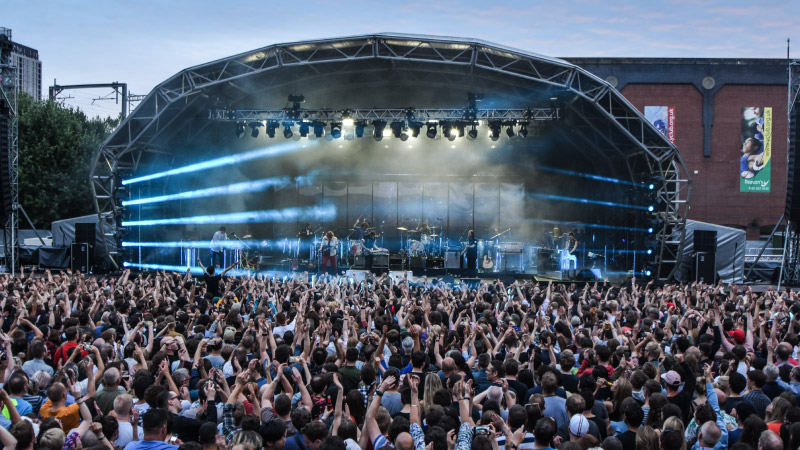 The screen content was created by Moment Factory, and is made up of a mixture of created graphic looks and shot footage. Icarus added: “There was a lot of thought put into all the visual elements of the show; the lights, screen and smoke all come together to make a whole. The artwork for their latest album, Everything Now, was created by an artist called JR, who produced a billboard in the desert with the album title in neon writing—this was referenced in the looks for the title track of the album which opened our show in Manchester. Having worked with JR on another project before, it was great to see his input on a live show again - he’s a fascinating character, with a good world view, a good choice!”

As well as reflecting the multifaceted nature of the band, one of the main factors for this design was that it could be flexible enough to fit in a wide variety of venues of venues. Chris explained: “Usually when you prepare for a tour, you know you will be in one type of venue, with maybe a couple of bigger shows and festival slots, but for this tour—everywhere’s been different. We’ve played at various different sized festivals, in established outdoor performance spaces as well as at short-term summer only sites, inside small concert halls, a castle and even an old East-End London boxing gym. As such, we needed to be super flexible and able to play both end on and in-the-round staging configurations. The layout was predetermined for each venue we played, but everything was on wheels, even the smoke box, so we could tweak things on the day. The current plan is to expand on this design and perform it in-the-round during a bigger arena tour. Arcade Fire are a fascinating band to work with, whilst there is an established order, they function very much as a collective and everybody has creative input when discussing how the show will look.” 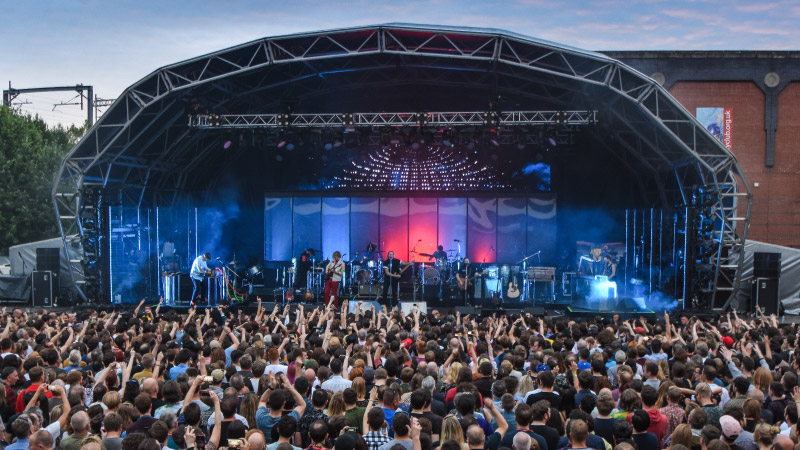 PRG are supplying Arcade Fire around the world, with Yvonne Donnelly Smith taking care of the band’s lighting and rigging requirements, and Paul ‘Macca’ McCauley looking after their video in the UK and Europe. When they continue their tour in North America, Mark O’Herlihy takes care of lighting, video and rigging. Yvonne commented: “Working with the Arcade Fire team was brilliant, they produced a fantastic looking show, and it’s a pleasure to be able to play a part in it. With PRG supporting Arcade Fire on both sides of the Atlantic we’re able to offer a seamless transition of kit, duplicating their rig to their exact specifications with any compromise; with the added bonus of our teams being in constant communication, so nothing’s left to chance.” 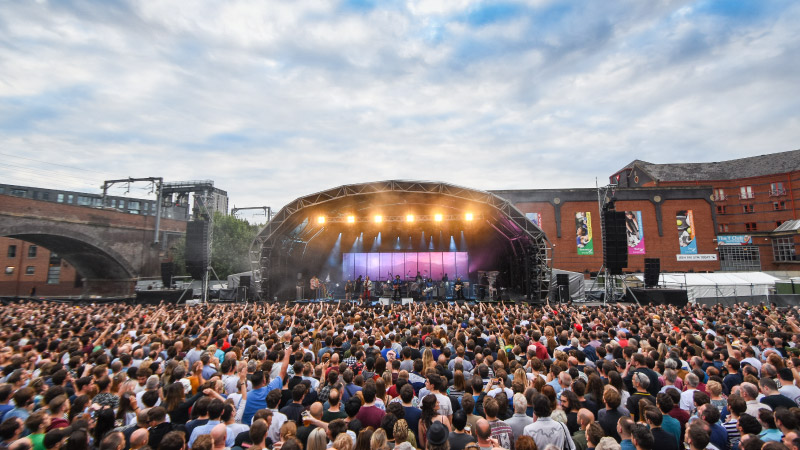