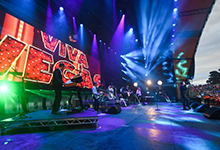 Amid the saturation of UK festivals, it’s often difficult to identify what makes each one unique. With Rewind, whether it’s the three different versions of the event around the UK, short—hit driven setlists or the light-hearted, carefree atmosphere; there’s no shortage of individual characteristics that make their weekend festivals stand out from others you may be considering. Held between July and August in the picturesque locations of Capesthorne Hall in Cheshire, Scone Palace in Perthshire and Temple Island Meadows near Henley-on-Thames; Rewind does an excellent job of capturing the hearts and minds of an audience slightly more mature than you would find at other, more mainstream festivals. Song lyric tee shirts, silly hats and neon accessories are obligatory clothing requirements for the happy-go-lucky crowd—reaching back to their teenage years and revelling in every moment.

Production Manager Keith Morris explained how the current version of Rewind came into being: “We started off putting on one-night shows at various stately homes with a line-up of about ten eighties acts playing their hit songs, and it proved to be really popular. So from there we decided to make it into a weekend festival with camping. The first proper Rewind festival was held in 2009 on Temple Island Meadows, just down the road from our office in Henley. Following the success of the event, we added another festival at Scone Palace in Scotland, which also sold very well; so we organised a third, halfway between the other two, in Cheshire; which followed the trend of the others and is another incredibly popular weekend festival.” 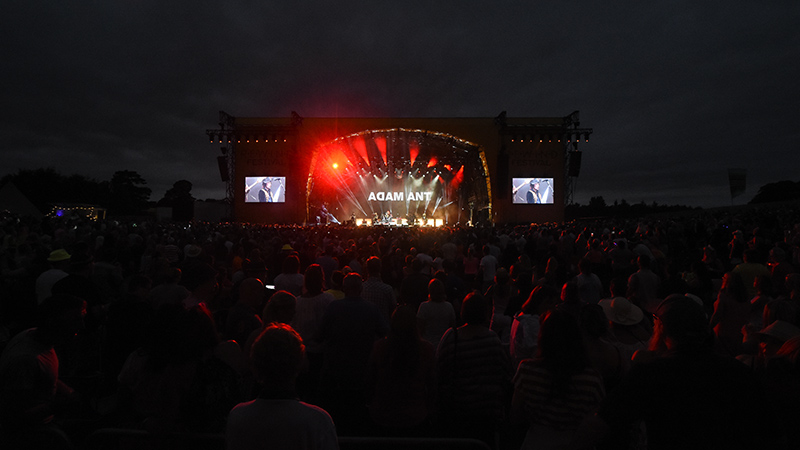 Keith explained how a lot of the audience is made up from large groups of people. “Although our crowd are typically older people, they’re all very well connected on social media. People tend to use our festivals as either an annual get-together for old friends, hen-dos, birthday parties or other celebrations. There’s a community feel and diehard Rewinders may come to two or all three versions of the festival each year—the main acts for the three weekends are largely the same, but there can be a lot of variation in the bands performing during the daytime.”

Lighting Designer Martin Nicholas has designed all inceptions of the Rewind festivals, and worked regularly with Keith since the 1980s: “Rewind’s a festival for grown-up punters, who come back year after year. I keep the stage design the same for all three locations, but refresh the design every year, keeping a balance between the use of modern technology and vintage lighting fixtures. This year I used the SGM G Spot, a powerful and versatile light, as well as the Icon Beam, which is my beam light of choice—bright and punchy, with strong colours and a great selection of gobos which are all very usable. I make use of the 10kW Skypans most years because they look phenomenal and very retro next to the shiny new fixtures supplied by PRG XL Video. This year I had a row of ten on the floor at the back of the stage, but in previous years the Skypans have been hung in various different configurations. Down either side of the stage were an arrangement of 2kW and 5kW 1950s GEC fresnels and 1934 10Kw Arri fresnels, they look brilliant and fill in what would usually be a dark spot down the side of the stage.” 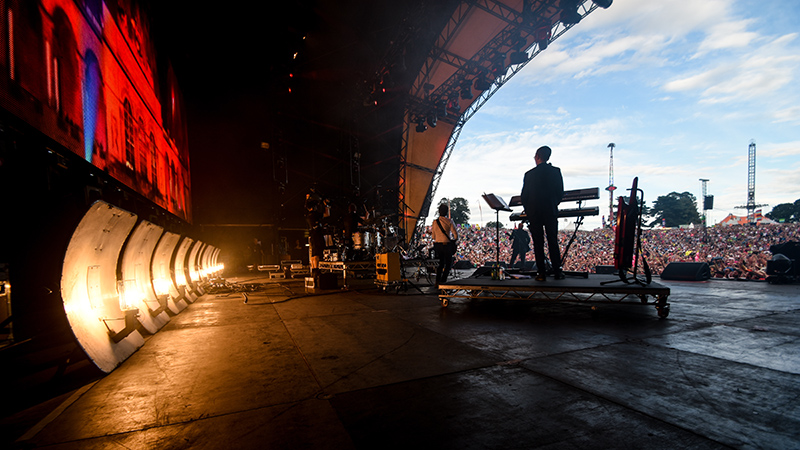 In addition to the 38 SGM G Spots, 32 Icon Beams and 20 Vari*Lite VL3500 wash lights, there were 40 2-light molfay blinders surrounding the edge of the stage—powered by Avolites Art2000 dimmers. Miguel Riberio created the video content for Rewind and went into detail about how he brought the 14x5 metre ROE Visual MC-18H screen to life: “What looks at first sight like a very simple LED video wall, is actually a very sophisticated video setup. The preparations start over a month before the first festival goes live, I gather video content from previous shows and often revamp some very old recordings so we have a big collection of video clips which can be replayed at the press of a button. The video for the acts performing early in the day is very simple and all busked from the PRG V476 console which I use to run the two d3 media servers, configured as a master and slave. As the day goes on and the bands playing are more well known, the scale and complexity of the video content is scaled up to the point where we have fully customised content running on timecode sync.”

Regarding the environment of Rewind, Miguel could hardly be more complimentary: “Although there is a lot of work involved, the atmosphere is so festive and relaxed, it melts away any stress. It’s great fun to do the Rewind festivals every year. I can’t think of any other event which has so many number one songs and popular tunes to which everybody knows the words.” 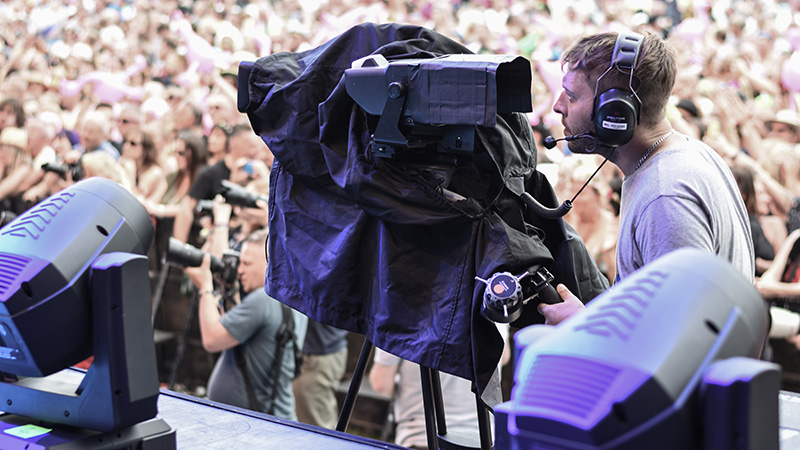 Martin works very closely with Miguel to decide the overall look of the stage and how the lighting and video technology will interact with each other: “The screen is the major element of the show and by far the most noticeable bit of kit we have on stage. I design the format and layout of the screen—but the rest of it is down to Miguel, who always does a wonderful job of creating video content for the festival. When running the show, we stand next to each other and work as a team, the lighting colour palette will follow the look of the video content so they compliment one another.” Martin explained how he uses an Avolites Pearl Expert Touch console to run the lights at Rewind: “The Pearl’s an excellent busking console, when the line-up consists of ten minute sets and two minute changeovers, there’s no point in programming any of the show, so busking’s the way to go.”

Keith Morris paid tribute to the creative input from Martin and Miguel, commenting that both have thoroughly bought into the ethos of the show and are a pleasure to work with. Keith has decades of experience working within the music festival and concert touring market, he commented about how the technology has changed over recent years: “The most impressive change has to be the rise and rise of LED technology. I also run a power company and several years ago we would have been using so much more power than we are today. What’s really impressive about LED lighting is even though the power consumption has gone down, they’re even brighter. The other side of LED is for video, an LED video screen is pretty much essential for every stage now.” 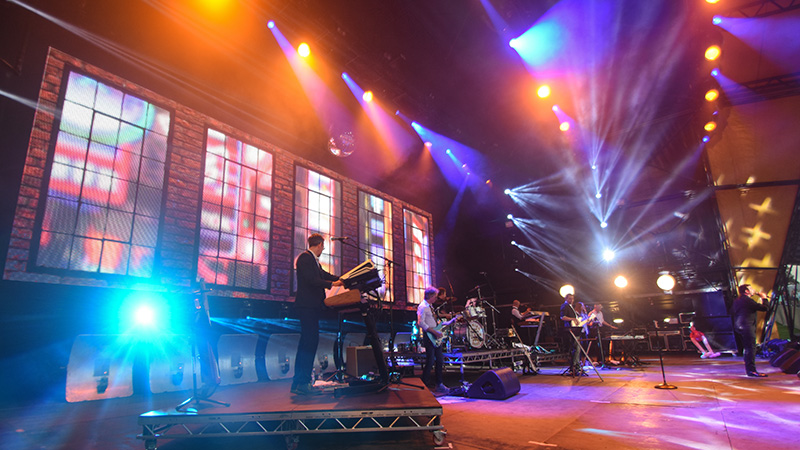 Martin paid tribute to his team: Crew Chief Paul Makin, front end tech Simon Swift and ‘super-techs’ Richard Griffin, Mark Scrimshaw, Dave Lights and Mark Clough. “One of the reasons Rewind works so well from a crew perspective is that everybody knows exactly what they’re doing, as a result, we have very few problems and it’s a wonderful environment to work in.”

Account Director Andrew Strachan coordinated the supply from PRG XL Video and looks forward to the festivals every year: “It’s a pleasure to work with everybody involved. Keith has a great vision of how to grow and develop Rewind each year. The creativity of Martin and Miguel is second to none, even though a lot of the acts return year after year, they always come from a fresh perspective and bring a new look to the stage. Martin has an exceptional attention to details and always knows exactly what he wants to achieve and we all work together to make it happen. For those people who’ve never experienced the Rewind Festivals, I cannot recommend them highly enough.”