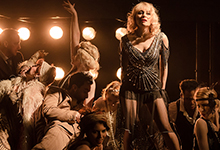 The Wild Party is a musical theatre production adapted from a book by Michael John LaChiusa and George C Wolfe, with music and lyrics by LaChiusa, based on Joseph Moncure March’s 1928 narrative poem of the same name. The show premiered off-Broadway in 2000, before this 2017 revival at London’s newest producing theatre. The Wild Party is a frenzied celebration of twenties indulgence and debauchery, interwoven with a honey-like jazz score with an infectious ability to get under your skin, even without any memorable, individual numbers. The storyline revolves around the central character, Queenie, an ageless cabaret showgirl, and her toxic marriage to vaudeville clown, Burrs. In an attempt to revitalise their tired marriage, Burrs throws Queenie a wild party—an all-night encounter fuelled by intoxicating substances, which strains the relationships and sanity of guests and hosts alike. Henry Hitchings of the Evening Standard summed up The Wild Party as: “Gin, sin, skin and fun.” 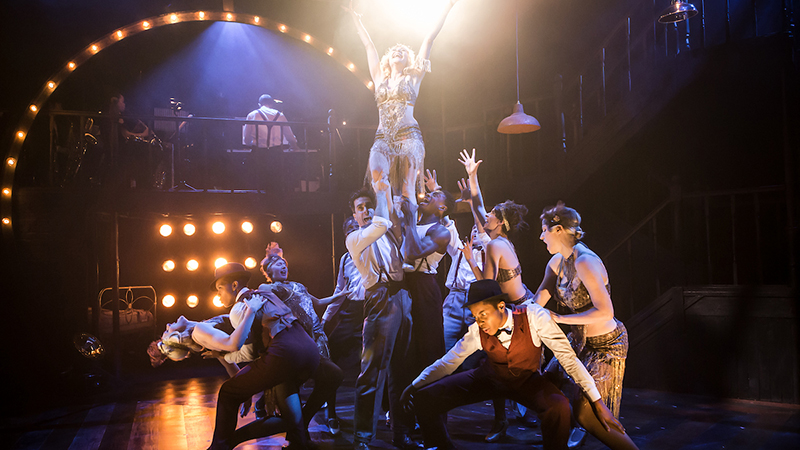 Richard Howell discussed the initial brief of how to light the show, and how the creative team worked together to stage The Wild Party: “It was great to be teamed up with Director/Choreographer Drew McOnie and Designer Soutra Gilmour, who I had worked with on a number of previous projects, including Jekyll and Hyde at the Old Vic. The theming of the design is well defined—being very warm and subtle for the majority of the time, with the flexibility to be harsh, exposed and even briefly unbearable when the occasion calls for it. The lighting moods follow the narrative arc of the action on stage; during the happy and seductive moments, the lighting is a very warm, tungsten look, then as the relationships between the characters begin to fall apart, it becomes brighter and more intrusive as the tensions reach boiling point.”

Richard discussed his use of tungsten fixtures—and the passion he and Soutra shared to achieve the tungsten, filament lamp look, which reflected both the theme and period of The Wild Party: “I used Martin Mac TW1s a lot, as a tungsten moving light fixture they suited the brief perfectly and are a very versatile light for theatre. The rich, warm colour of the TW1 is second to none and irreplaceable for this particular project. We also had several Martin Mac Vipers, which I used for adding colour when needed, but also filtered to mimic the filament look. One light I was very keen to include in the rig was the ETC Source Four Lustr2s—it’s a phenomenal piece of kit, and the only LED fixture that would have worked as part of our design, due to the ability to colour match it with its traditional, tungsten cousin.”

Richard continued: “Underneath the eight-piece band was a canopied space, through which the actors entered and exited the stage at certain points; we covered the back wall of this space with three rows of five ETC Source Four Pars, which sat at a very low intensity for most of the show, casting a seductive glow across the stage—but were cranked up rapidly when the need to make the lighting bright and intrusive was called upon. Being aimed directly at the audience, the effect of doing this was brutal, and in complete contrast to the subtleties of the rest of the show. We did initially discuss having the entire wall made up of smaller filament lamps, but that would have been less practical to achieve and too indulgent for the budget we were working with.” What’s on Stage’s Holly Williams described The Wild Party as being: “…beautifully lit by Richard Howell, combining stagey limelight with woozy party atmospherics.” 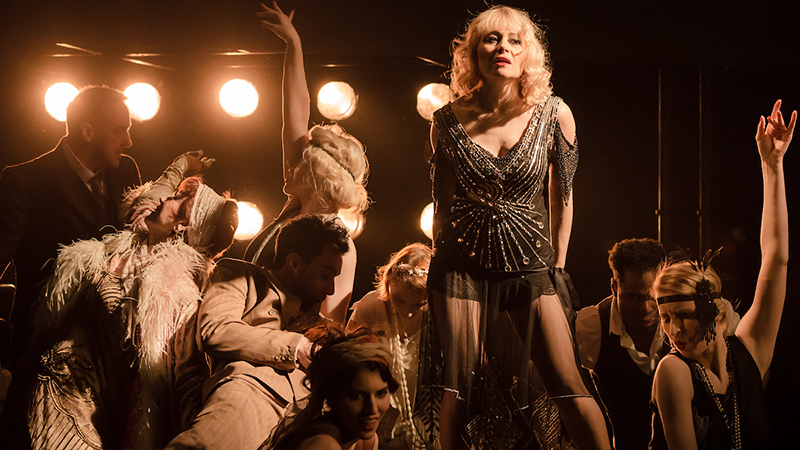 In addition to the headline lighting products, Richard also made use of festoon lighting arranged on a circular piece of set around the entrance/exit, numerous pendent lights which hung down at random points, and Birdies as footlights around the edge of the stage. Production Electrician Neil Foster commented: “The Wild Party was in essence a perfectly normal small theatre fit-up, both Richard and PRG XL Video worked with the limited space and resources available to develop a rig suitable for a complicated musical with lots of different looks, scene changes and many cast members on stage at any one point in time. The substantial prep facilities at PRG XL Longbridge were great, helping us to get everything ready before we arrived at the venue, meaning we could maximise the time we had there before going into previews.”

Richard worked with Lighting Programmer Vicky Brennan, they used an ETC Gio @ 5 to plot and program the show, before transferring the show file onto the theatre’s own ETC Ion lighting control console for the main run. PRG XL Video Account Manager John Pauls commented: “Working with The Wild Party team was a really pleasant experience, they all knew exactly what they wanted to achieve, but had a realistic approach to making it work with the products and budget available. Richard’s lighting design was absolutely perfect for the show, Neil’s vast experience of working on major theatre productions ensured the prep and fit-up went without a hitch, and Stuart is an excellent Production Manager—working with the team around him to help produce a technically brilliant show.”